Up before sunrise on Tuesday, March 15, John headed to the engine room to do a last systems check, and I scurried around clearing counters and shelves of anything that might go flying should we encounter rough seas. Although not much ever moves on AfterMath, we are past sailors and we know that having anything crash to the floor when waves hit is not a pleasant experience. We were ready to make our crossing to the Bahamas, and to do so we had to be prepared for the Gulf Stream.

The Gulf Stream flows north from the Gulf of Mexico to Canada and has a current of about two and a half knots. If winds come from the north they push against the stream so that huge waves kick up and make for a very unpleasant ride. People say that the waves look like a herd of elephants passing by. While we waited for weather with no prediction of northerly winds, we understood that weather is unpredictable on the ocean and anything could happen on the Gulf Stream.

Besides making sure every lamp, basket, bottle of soap, and whatever else was on the ground, put away, or otherwise contained, I put a medicated patch behind my ear to prevent seasickness. The dogs were put in their life jackets and we were ready to go.

I went to the stern to take a couple of pictures of us leaving the United States, knowing that while we will fly home to see family during the next couple of years, we would not be living in our home country for some time. It was more emotional for me than I thought it might be. Chris, my lifelong friend, put it best the day before we left. She said, “This is it. Now it’s a reality.” And it was.

One thing that made it easier, though, was that, while posting a picture of us leaving the states, I got a message on FaceBook from Bill Kirk, Craig’s father. He said he could see us leaving on the Port of Miami webcam. Although I don’t think of Bill as a tease, I wondered if he was just kidding around, but soon came the message that he could see we had passed the point of Key Biscayne, and that we were traveling into the ocean at 8 miles per hour. He was right! He tracked us all day through that site and it was fun knowing he was watching us. 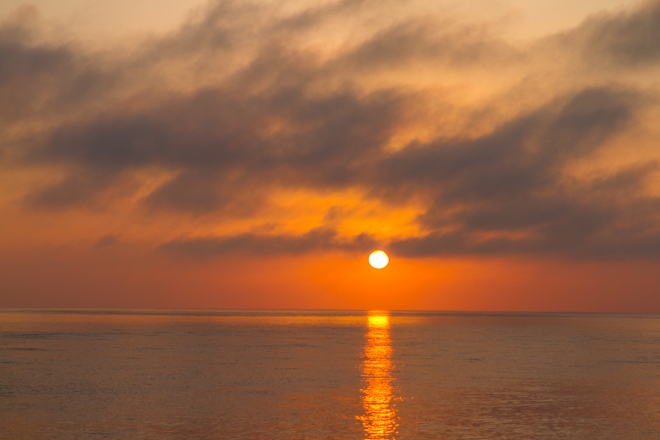 Following the sun due east

Just as we left Key Biscayne, the sun began to rise. We were heading due east and the song lyrics “Tomorrow may rain so I’ll follow the sun” popped into my head. It was a beautiful sight. The water was calm, it was warm and breezy and I was settled with my coffee on the bow of the boat enjoying every minute.

The distance between Key Biscayne and South Bimini is only about 45 miles, a distance we commonly cover in a day and one that typically would take us seven or eight hours. After about six hours I went in to the pilothouse to ask John when we would enter the dreaded Gulf Stream. He told me we had been in it for a long time already. He could tell because the water temperature had increased significantly, a sure sign of the warm Gulf waters running northward. All of our waiting for good weather had paid off. I seriously never felt any difference in the waves and all was well.

During our crossing we traveled over water that was 2500 feet deep. It is a gorgeous shade of cobalt blue there and all I could do was stare at the ocean. All of a sudden, while I was looking off the boat, a huge swordfish jumped and flew out of the water not more than 50 feet from us. What a beautiful sight and a thrill, but of course, not one I was prepared to catch with my camera. Also interesting were the countless flying fish that literally flew out of the water to be out of our path. These fish have wings and they fly quite a distance before landing back in the ocean. They are amazing creatures to watch. 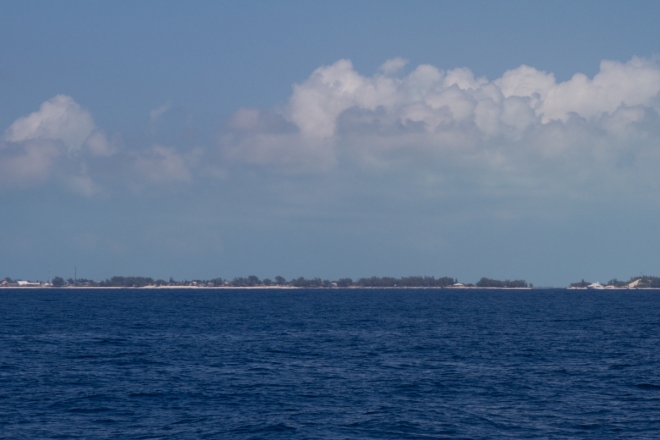 The first site of Bimini in the Bahamas

Entering the water surrounding Bimini is amazing; the water turns suddenly and distinctly from that gorgeous dark blue to a shocking and incredible turquoise. It is so clear that depth is deceptive. While we were in ten to twelve feet of water, it was hard to believe that we had more than a foot underneath us. I sat on a dock box on the bow watching for any obstacles that might be in our way, but, of course, none appeared and we safely made it to Bimini Sands Resort where we docked for the night.

We prefer to anchor, especially when the water is so beautiful, but after entering the Bahamas we needed to clear customs. The proper etiquette is that when you bring your boat into another country’s waters, you fly a yellow quarantine flag to show that you have not yet checked in to the customs office. The office in Bimini was a five-minute cab ride from the dock and only the captain of the boat is allowed on shore until the process is complete. John and I filled out immigration and customs papers, gathered documents for the dogs, and pulled out our passports and then John was on his way. Once he returned with everything approved, I went for a swim in the pool while John lowered the yellow flag and rose the Bahamas flag that we had purchased before we left the states.

The resort had WIFI so I was able to check email and go online to find that our kids also did a lot of following us throughout the day. Jeff had suggested that we buy a Delorme InReach device. This is a two-way satellite communication system that allows us to send unlimited texts to our friends and family without using precious overseas data and also tracks our path every ten minutes. To our surprise, not only had they watched us as we traveled along, but they had a satellite picture of AfterMath at the exact dock where we were tied up for the night. Technology truly is amazing.

Unfortunately, the WIFI at the marina was not strong enough to upload my pictures or to accommodate a blog entry, so we will have to wait until we find a better signal before this post can be made. In the meantime, we are excited to see what the Bahamas have to offer and we can’t wait to do some exploring!