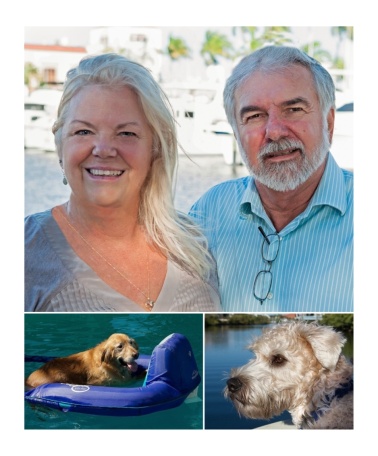 We are John and Debbie Daigle and, along with our Golden Retriever, Jake, and our Soft Coated Wheaten Terrier, Kirby, we are about to set off on the adventure of a lifetime.  Along with our three children, Jason, Kelly and Jeff, we have been a family of boaters for most of our lives.  We started on a small power boat on Candlewood Lake in Connecticut and then, for many years, sailed on Long Island Sound and the surrounding areas on our 30 foot Hunter, Solitude.  We have also boated along the east coast from Martha’s Vineyard to Florida, sailed in the Caribbean, led groups of boaters from Sarasota, FL to Key West in the Gulf of Mexico and guided a trip with a group from Sarasota to the Bahamas.

John and I moved from Connecticut to Florida a little over 10 years ago when we decided we had had enough of winters.  Somehow, for a while, we ended up with all of our children in Florida as well.  Jason lives in Port Richey, Kelly and her family (husband, Craig, and children, Michaela, Carter and Madison) are in Jacksonville, and, until recently, Jeff and his family (wife, Sarah, and sons, Walter and Rush) lived in Melrose.  Jeff, who is in the Coast Guard, has since been transferred to Washington, DC, but we really enjoyed our time in Florida with all of the kids.

In Connecticut and in Florida, I taught math in high school.  John, who has an engineering degree, made a career change from technical sales to boat sales before we left Connecticut.   He continued that job in Florida and eventually became a boat broker.  We have had a great time in Florida!  We bought a Cessna 172 to travel all around the state and to visit our kids on a regular basis.  John had earned his pilot’s license when he was in college.  We also have a Boston Whaler which we keep on a canal off the Manatee River behind our house in Bradenton.  Now though, it’s time to transition to AfterMath.

Over the past several years I have become a serious photography hobbyist so you will see lots of pictures of our adventures as we make our way through canals, locks, rivers, and islands.  All along the way we welcome you to travel with us on our blog.