Some days are just better than others. We have had almost a month of visiting with family, traveling around the Chesapeake Bay, and taking care of some very necessary repairs. The visiting and traveling days are far better than the repair days, but life on a boat means that sometimes things need fixing, just as they do in a home on land.

We left Swan Creek on July 18th and headed back to Steve’s dock, two houses away from Jeff’s house in Annapolis, because we were having trouble with our water tanks pumping properly. It was just too hard to deal with the sporadic availability of running water and we wanted it fixed quickly. At Jeff’s house we had access to a car to buy necessary parts and, especially, to Jeff who is a whiz at all things that have to do with boats. We can’t thank him enough for all of his help in getting the water issue straightened out. 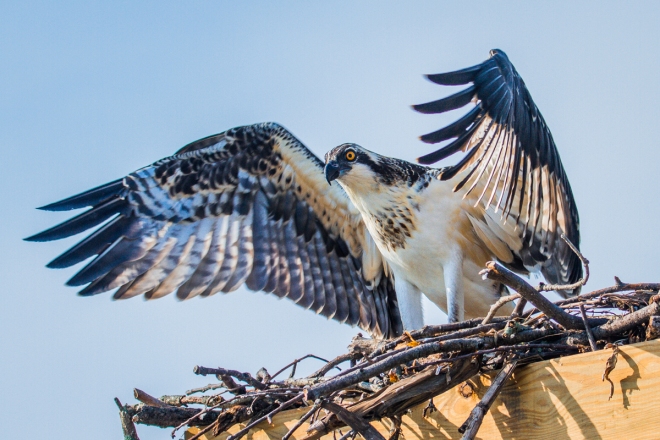 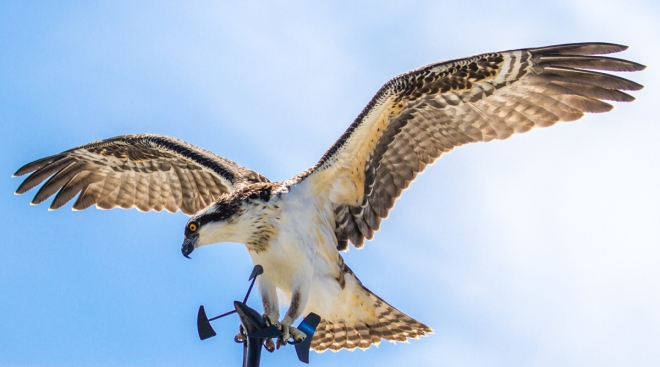 And here is this poor baby traveling with us on our wind vane!

While back at Jeff’s, I was able to continue my watch of those baby ospreys. During the first day or two we saw that one was able to fly and would leave the nest, returning over and over.   The other baby seemed a little less brave and would walk around the nest, flapping its wings, sometimes getting a little lift, and then crying loudly for someone to bring it food. Finally on our last day there we saw the second baby take to flight. I was so happy that we were around for the event! We started out on our way later that morning, July 24th, and headed toward the northern end of the bay, about four hours of motoring away.   When we had traveled about two hours, we got a call to AfterMath from a boat passing by. The captain of the boat laughed and told us we had an osprey hitchhiker on our wind vane. John’s first reaction was, “I hope it’s not one of the babies”. I went out to look, and sure enough, a young osprey was perched up high, seemingly in distress. It flapped its wings, but did not fly away. It was obviously one of those babies, and we were pretty sure it was the one that had just braved leaving the nest that morning.

We weren’t sure what to do, so we called our daughter, Kelly, who is a veterinarian and pretty much a wild life expert. She told us we had two choices. As ospreys are raptors, they are protected, and we either needed to call the Fish and Wildlife Department or turn around and bring the baby back. She was pretty sure that returning the baby would take less time, even though we were two hours away.   So, we turned 180 degrees and headed back to Annapolis again. When we were getting close to Mill Creek where the nest was, the bird finally got brave and took a flight, but it circled around and headed right back to the wind vane. Now, however, it didn’t have a great position and the vane was spinning and hitting the bird, lightly, but annoyingly, in the chest. It stayed with us trying to get a better perch, but finally, took off as we neared a bridge. We were just sick that this all happened and that we weren’t able to deliver the bird back to its home, but we know we did the best we could. We continued another 40 minutes on the way to the creek in case the baby was following us, but we never saw him again.  Eventually we turned north again and went back to Swan Creek for the night, as we were way too late to make it to our intended destination!

Scenes from along the Sassafras River near Georgetown 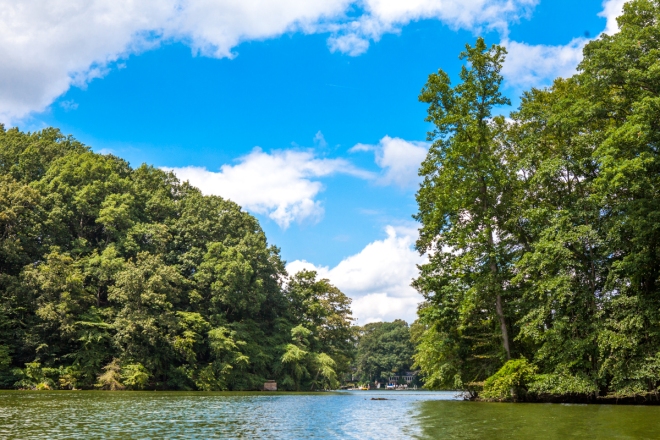 The next day we traveled to Georgetown, MD, which is 10 miles up the lovely Sassafras River. It was a beautiful ride and we arrived at Georgetown Yacht Basin in the afternoon. The marina had a pool and a little beach, and offered a courtesy car. Once again we needed some work done as our air-conditioning was not working properly, but there was an AC mechanic at the marina and that repair was taken care of quickly. I took advantage of the car and did a good grocery shopping and, of course, made good use of the pool. Georgetown is known for its beautiful sunsets and, although the first day or two was cloudy, we were rewarded on our last night with a glorious show of color that was equally as beautiful in the water as in the sky. 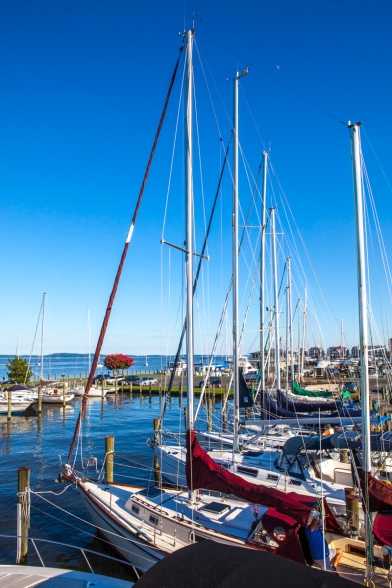 Havre de Grace at the marina 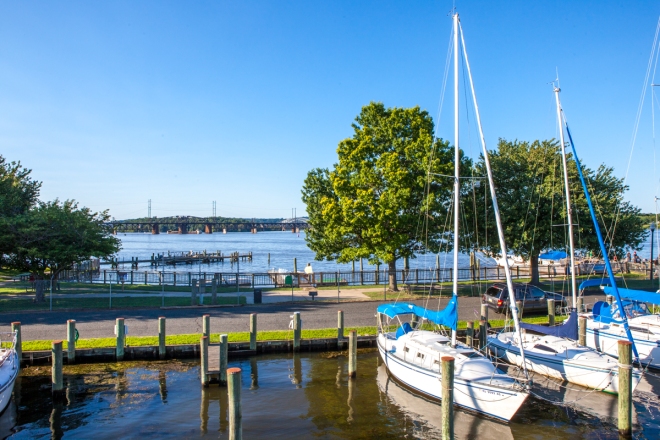 Pathway to the sun on the Bohemia River

We left Georgetown on July 30th and traveled to Havre de Grace, a town on the lower Susquehanna River. It’s a pretty little town with museums, parks, and shops. The marina there also had a courtesy car, which we borrowed to drive around town to see the sights. We stayed just one night before motoring to the Bohemia River where we anchored on the 31st. 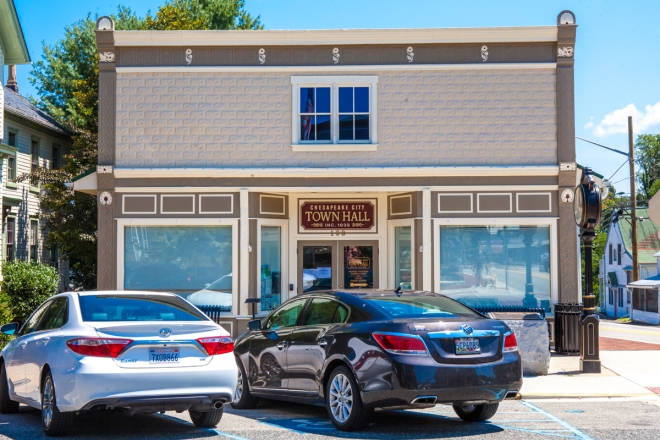 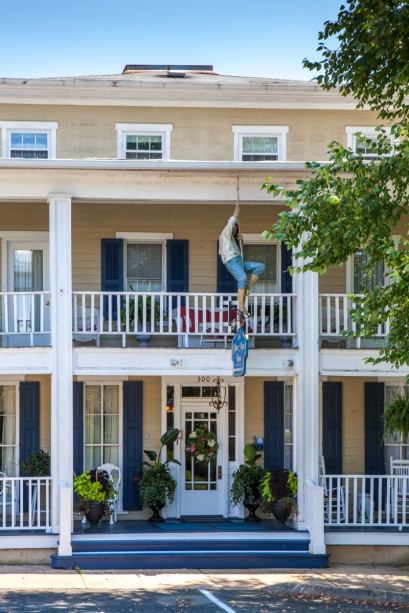 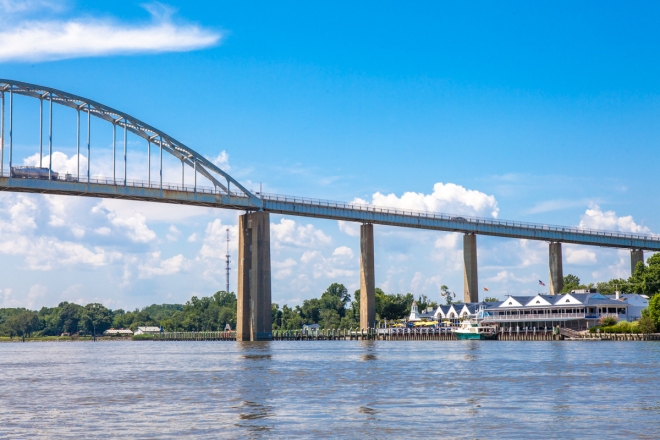 Our next stop was at Schaffer’s Canal House in Chesapeake City, a town that is on, and is divided by, the Chesapeake and Delaware Canal (C&D Canal). There, huge barges pass by the scenic town on their way to ports all over the world. We took Tangent, our dinghy, across the river to see the town, which is historic and quaint, and then headed back for a wonderful seafood dinner at Schaffer’s. One point that should be made, though, is that Chesapeake City is pretty much closed up every day except Thursday through Sunday in the summer, and, unfortunately we just weren’t there on those days. We wished we had realized this fact before we got there so we could have rearranged our schedule to take advantage of some of the fun events that happen when there is more activity.

Ford is growing so quickly!

Having completed our north bound travels, we started on our way back south on the bay. Our plan was to stop at Jeff’s again for a couple of days before continuing down to the Potomac where we will meet our friends Chris and Sam and then go up the river to Washington, D. C. Things changed a little bit though! First of all, Jeff and Sarah were between au pairs, and they needed me to take a few days of babysitting. That was fine, but while we were docked two houses away again at Steve’s, John noticed our batteries were not charging as they should.

When we were in Georgetown, the electrician who worked on our air conditioning had checked the batteries and thought that one needed replacing, so John found a battery and he and Jeff did the job. Things still weren’t as they should have been, so John decided to replace all eight batteries, a huge job as each battery weighs about 70 pounds and needed to be transported from Jeff’s truck in his driveway down 45 steps, placed in Tangent, dropped off on AfterMath, and then brought down to the engine room. Of course, that meant the old eight batteries had to be transported back up to the truck in reverse order of the drop off. Again, we were thankful to Jeff, who helped John with the transport and with the installation of all of those batteries. That seemed to solve the problem, however, two days later the generator was not able to charge the batteries and the solar panels stopped working as well. Finally yesterday we were able to get a marine electrician to come to the boat. He spent all day tracing the problem, which was too complex for me to ever try to explain, but he found the issues and we are back in business!

So, today we will start our journey again. As I write, John is figuring out our schedule so we can tell Chris and Sam where to meet us and which day. We are excited to be going on our way as, there is much to see and do along our way back to Florida for the winter!