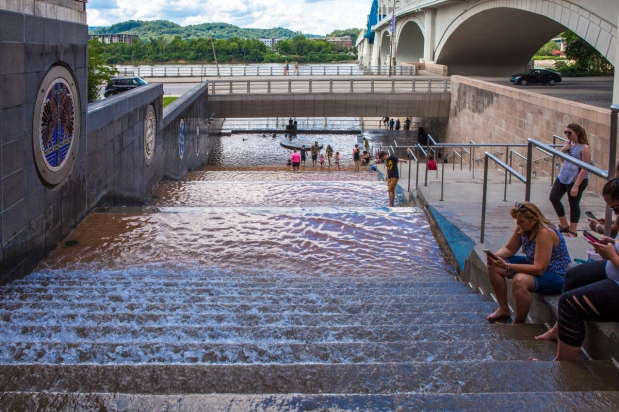 The Tennessee River between Joe Wheeler State Park and Chattanooga twists and turns through Alabama and Tennessee, almost touches Georgia, and switches from Central Time to Eastern Standard Time.  The riverbanks often are high stone cliffs, and mountains appear on the horizon; the scenery changes with each passing mile.  Finally we were in Chattanooga and spending time at one of our principle summer destinations.

Grain processing plant along the river 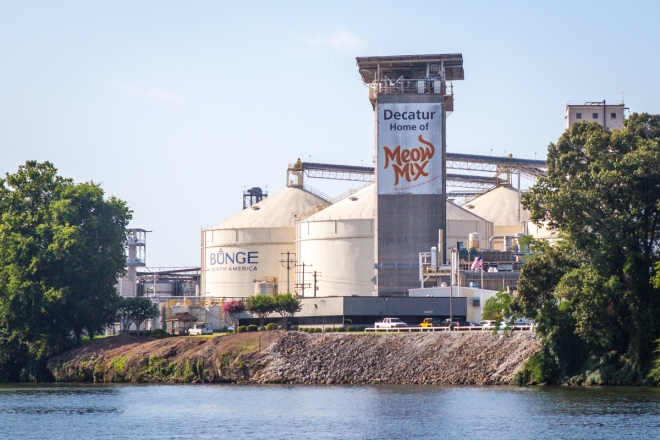 Here is where Meow Mix is made!

We pulled out of the beautiful Joe Wheeler State Park in Alabama on June 25th and traveled to the Riverwalk Marina in Decatur, Alabama.  This small marina, in a cove off of the Tennessee River, had been hard hit by a storm in April, sinking boats and collapsing the structure that covers the slips there.  We docked on a rather rickety dock that did not have power, but we did fine for one night. There was no discussion, however, about whether we wanted to stay an extra night!

The scenery changes as Chattanooga is approached.

High cliff walls along the way

The next two nights were spent in Huntsville and Guntersville, both in Alabama, before moving on to Goose Pond Colony Resort in Scottsboro, Alabama.  At Goose Pond, we were happy to meet Debbie and David Smith, a very nice couple who just purchased a Hatteras LRC like ours.  We spent time touring each other’s boats, having dinner and a night of entertainment together, and talking about our travels and plans for the future.  Hopefully there will be more meet ups with Debbie and Dave in the future.

At the free dock at the state recreational area 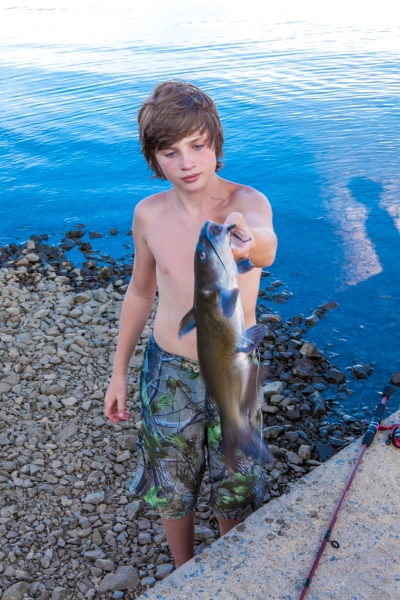 Here is his catch!

Hales Bar – an early multipurpose dam on the Tennessee River

Some early morning views along the river

A morning drink along the river for this deer 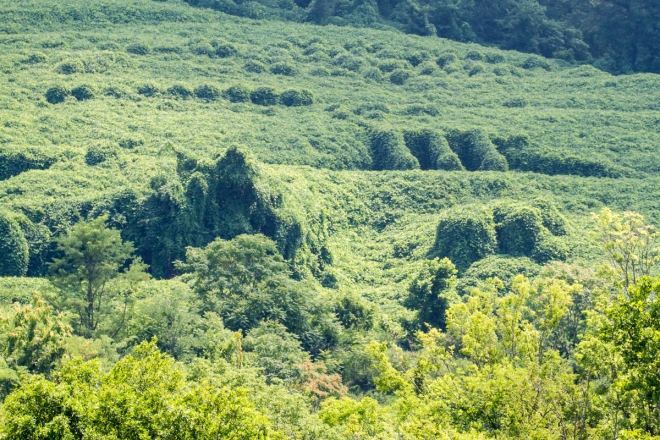 Kudzu was brought from Japan to help prevent erosion.  Now it has overtaken much of the landscape.

On June 29th we motored to a pretty recreational area that provided a free dock for transients. I found the swimming area quickly and finally was able to get into the water of the Tennessee River.  The view was beautiful with clean water, people fishing and swimming from the docks, and the first true views of mountains as a backdrop.  Finally, the following day, we arrived in Chattanooga, TN.  As we approached the city, we noticed our phones had changed times, and we were back to EST for the first time in three months.

One of the many duck tour boats on the river

Any kind of watercraft can be found on the Tennessee River 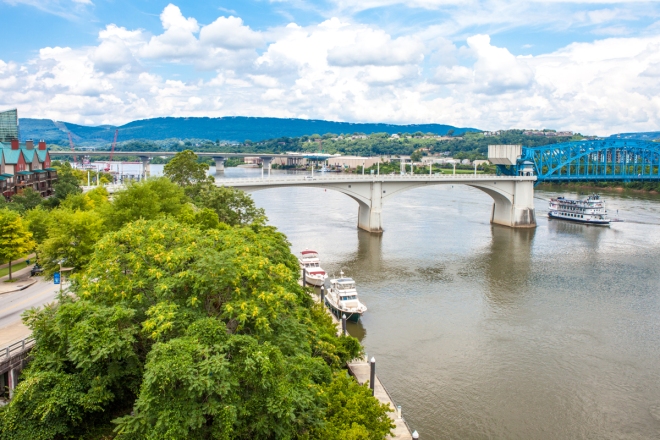 From the pedestrian bridge.  AfterMath is front and center, the Southern Belle is on the right under the bridge. 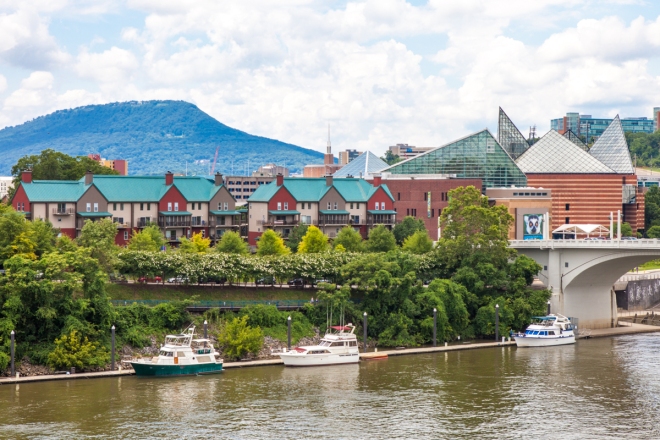 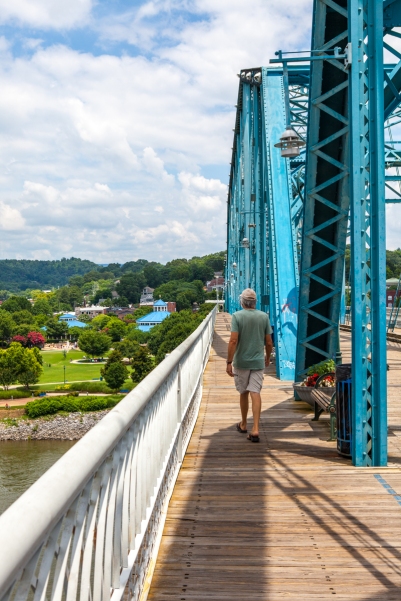 That’s John on the pedestrian bridge 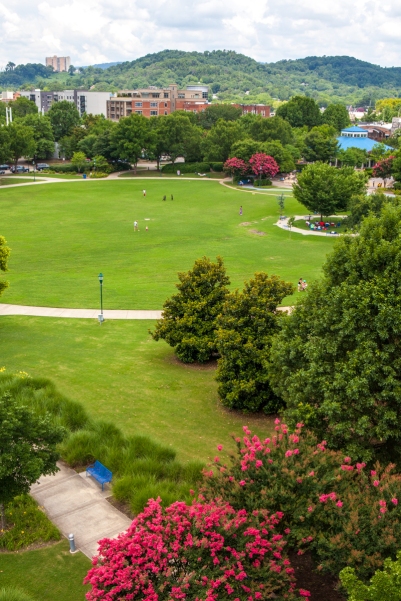 Coolidge Park at the north end of the bridge 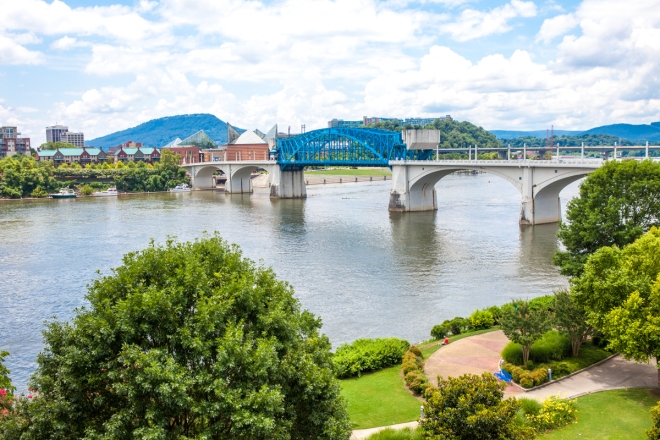 Looking back across the river from the north side 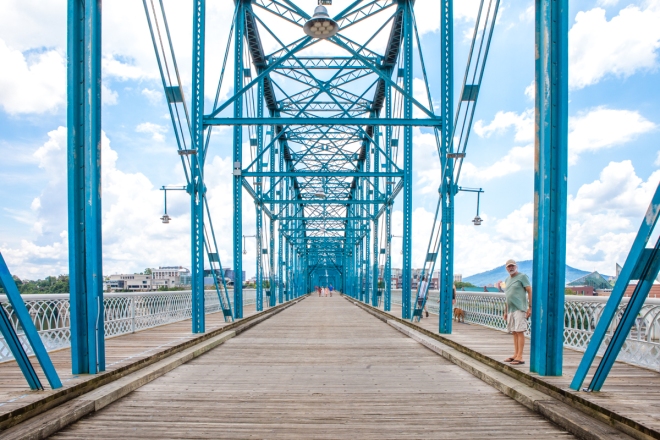 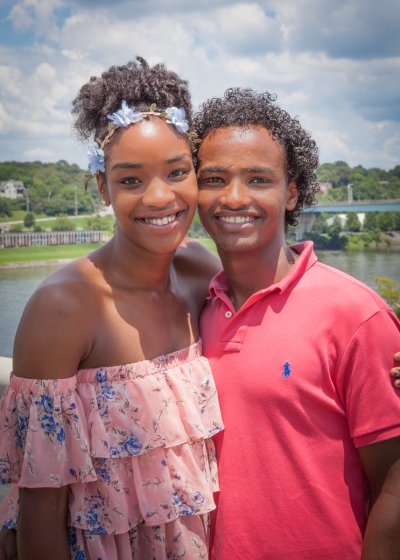 Such a cute couple on the bridge.  She asked me to take their picture on her phone, so I asked if I could also take one for the blog 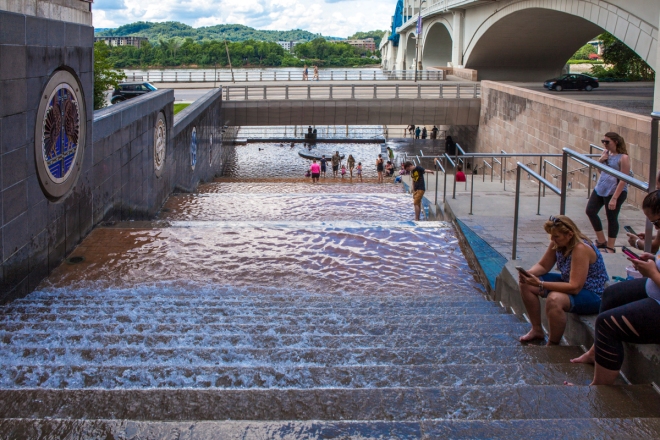 The waterfall pool on the river in Chattanooga

At the base of the waterfall pool 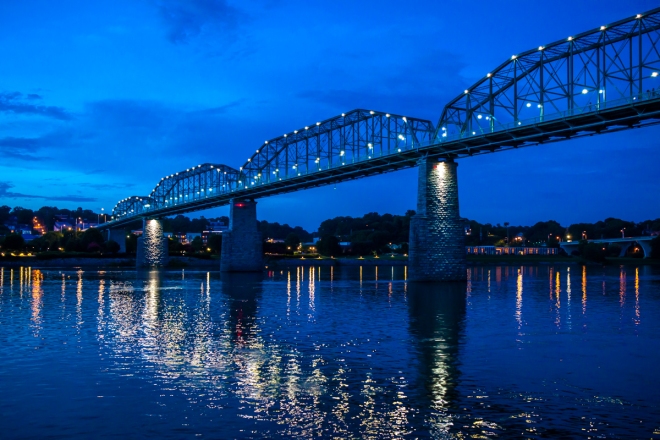 The pedestrian bridge at night

Inside the Chattanooga Choo Choo Hotel 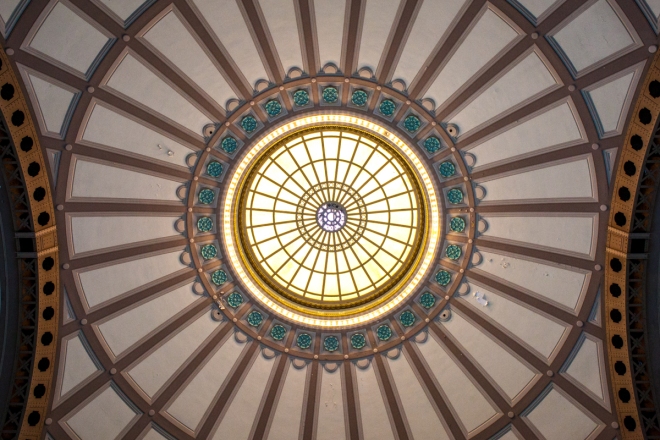 This train is affectionately known as the Chattanooga Choo Choo.  In truth, there was no one train called by that name

A few more shots of the hotel 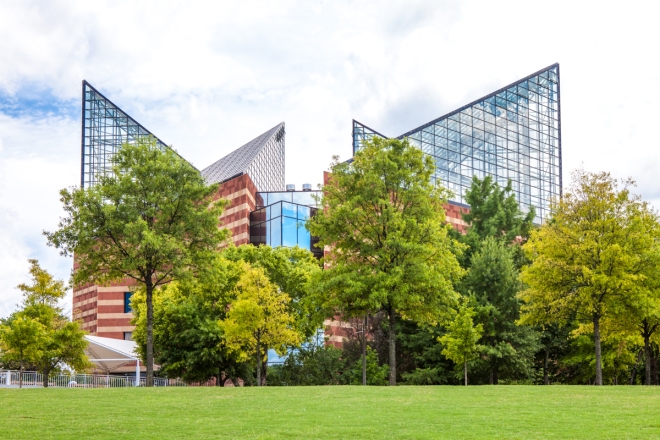 The aquarium on the waterfront

Getting ready for the fireworks on July 3rd. 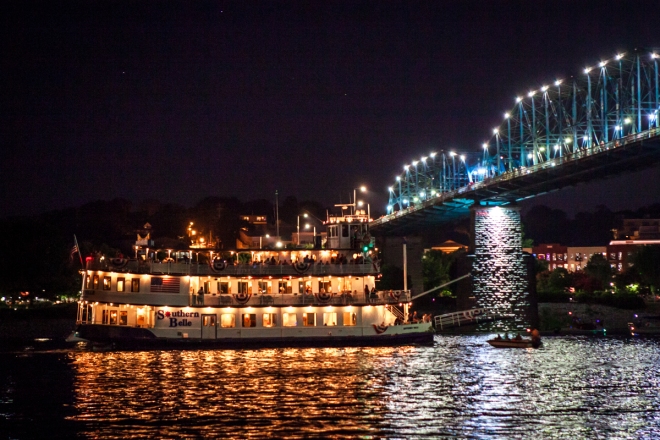 The Southern Belle out for the fireworks tour. 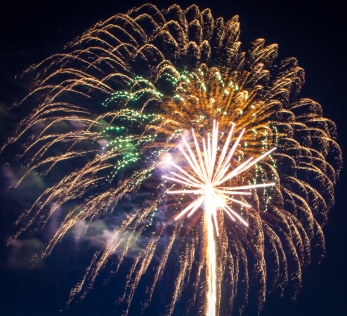 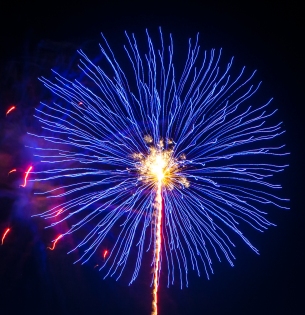 Chattanooga is a vibrant, hot, humid, and hilly city.  To get anywhere around town visitors must be prepared to climb stairs and hills, but it is well worth the effort.  We arrived in time for the Fourth of July holiday and we spent the first couple of days exploring by foot, by tour trolley, and by the free shuttle that transports people around town.  There is a wonderful pedestrian bridge that spans the Tennessee River and connects north and south Chattanooga, and we were docked right under it.  From AfterMath we could watch the converted Army Duck Boats as they brought tourists past us, see the big paddleboat, Southern Belle, make its way up and down the river, and watch all of the action as boaters traveled through the city.  We spent some time at the Chattanooga Choo Choo, now a hotel that was made from a converted train station and that was named in honor of the old song by the same name.  The hotel, of course, houses a train by the name of the Chattanooga Choo Choo in its garden and over night guests can choose to rent a train car to stay in instead of a hotel room if they like.  We were rewarded with a fabulous fireworks display directly overhead for the National holiday; we watched from the fly bridge of the boat while eating cheeseburgers. It was time to move along on July 5th, but we made plans to see more of the attractions as we pass back through on our way west on the river in a few weeks.

So, we are looking forward to returning to Chattanooga again.  The sights ahead, however, are waiting for us and we are ready to continue to make our way east and north along the river, and we are excited to know that Chris and Sam will be joining us near Knoxville for more of the trip. For now, we will continue on the last leg of our Tennessee River journey before starting back downstream.  We are enjoying traveling the inland waterways of our country, finding new friends along the way, and visiting new places, all while “living the dream”.