The day finally arrived: the day for the Dreaded Mona Passage. We moved AfterMath away from the dock on Saturday, February 25th and anchored just outside the marina so we wouldn’t have to deal with dock lines or worry about waking others who were sleeping when we started our engines early Sunday morning. I was prepared with a scopolamine patch stuck behind my ear, medication that helps prevent seasickness. Every item, both inside and outside the boat, that could move when a wave hit was secured, put in a cabinet, placed down on the floor, and otherwise tied up. I even stowed my cameras because I was sure I wouldn’t be using them for this leg of the trip. We had a cup of coffee as we waited for enough light to pick our way out of the bay, and then we entered it: The Dreaded Mona Passage. But then there was nothing. No waves, no wind, not even a whitecap for almost the whole way across. While I knew John would pick a great day, you just never know on this dangerous stretch of water, and I had myself all worked up for nothing at all. I sat outside and read for the entire eleven hours it took us to make our way from Puerto Real in Puerto Rico to Cap Cana in the Dominican Republic. The weather was perfect, as was the sea, and one more passage going north and west proved to be much kinder than going south and east.

We arrived at Cap Cana in the late afternoon and were met by the friendly dockhands and dock master there. As soon as we were tied up, Frank, the dock master asked me if I would put Kirby on a leash so he could take him for a little walk. Of course I obliged and Kirby and Frank had a great time while John and I got ready for the visit of the Customs and Immigration people. In the Dominican Republic, before you leave the boat, a group of varying numbers shows up and boards your boat. We had a party of five that included Customs, Immigration, Department of Agriculture, the Navy, and the Port Captain. Everyone had their papers to check and their fees to charge, of course. Also, it is expected that tips should be given to all who “visit”. 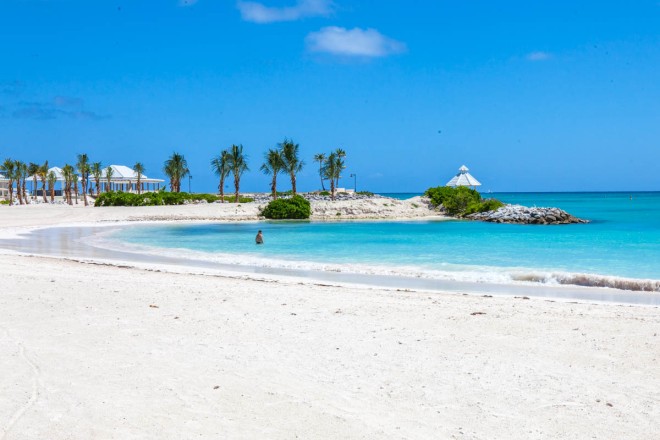 The beaches at Cap Cana

A pool at the beach 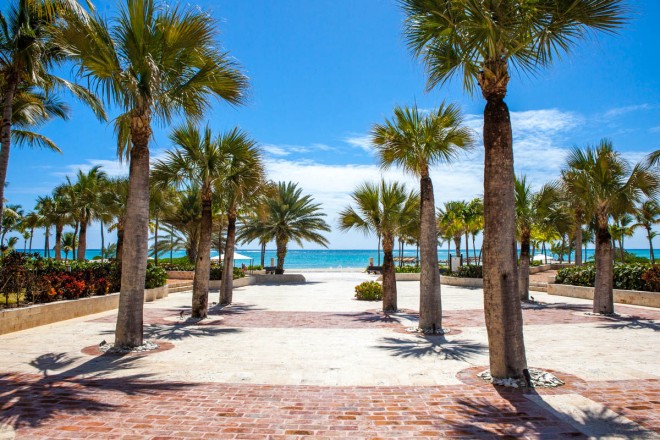 The lovely scenery and pools around Cap Cana 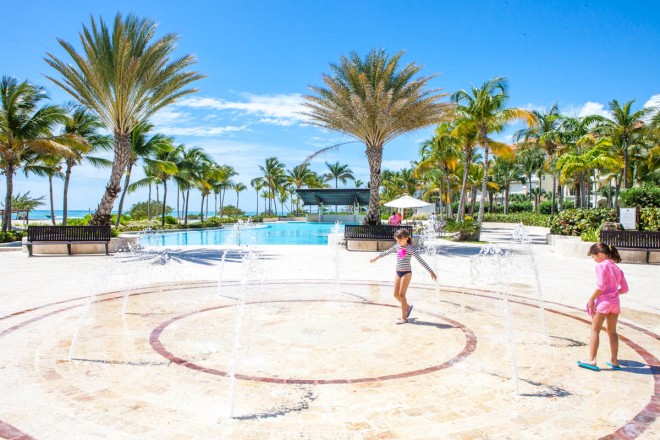 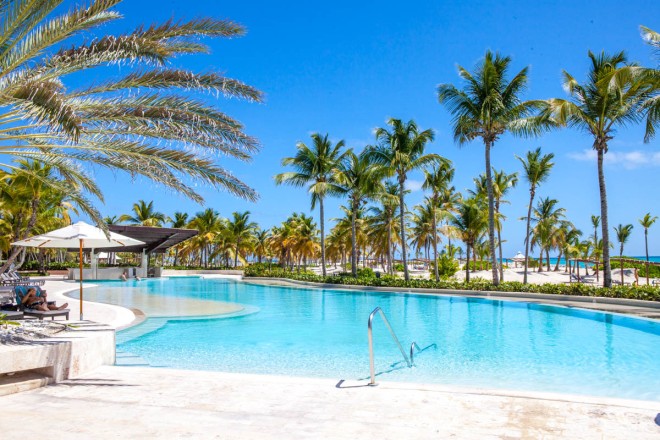 At the marina.  AfterMath is over on the right.

Most of the bikes around the marina are not locked, but this one is locked to an anchor.  Pretty creative for a marina bike! 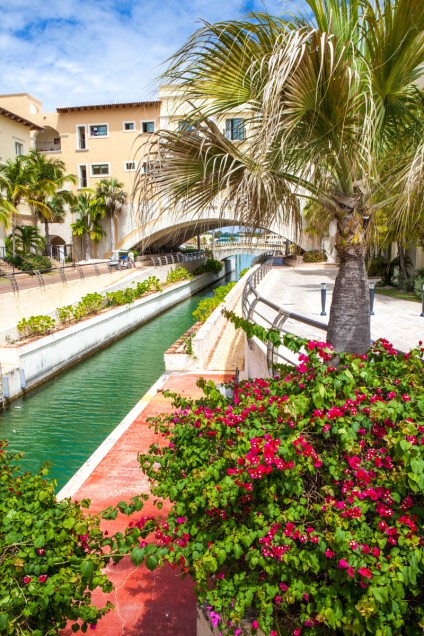 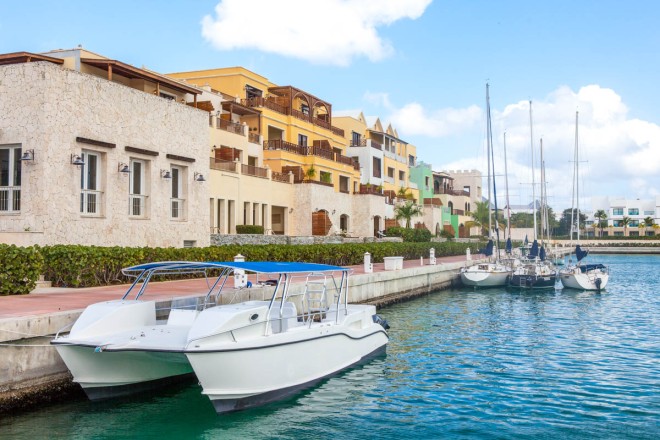 Cap Cana was easy to settle into. We were eager to walk around and explore on Monday morning and it wasn’t long until we realized that the marina is just a tiny part of this huge development that right now includes condos, schools, spas, five star hotels, restaurants, golf courses, beaches, an adventure park, and much more. It is a home base for fishing boats that seem to constantly bring in red snapper and huge mahi-mahi. The area is also famous for the excellent sailfish and marlin fishing and boats leave daily with tourists who want to try their hand at catching these sport fish.  What is currently on the property is just the beginning, however, as there is endless land still to be developed. For us, though, it quickly became obvious that we would be enjoying the area for a while as the waves for our next 80 mile leg were predicted to be in the 10 to 12 foot range for the foreseeable future.  Therefore, we adjusted our plans and knew we would stay in this safe marina for a couple of weeks. Although we know we need to keep moving, I was pretty happy visiting the beaches just about every day and enjoying the sun, the water, and a lot of good books on my Kindle. John, who is not quite the beach lover I am, even had to admit that these were ideal beaches to relax on, and he joined me on some of my afternoons by the sea.

At the beach in Bayahibe. 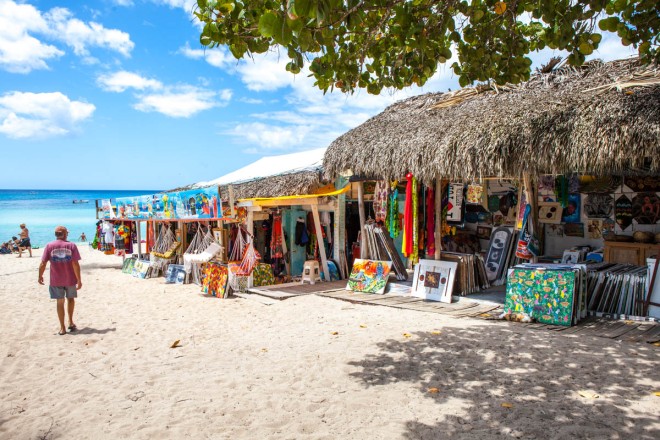 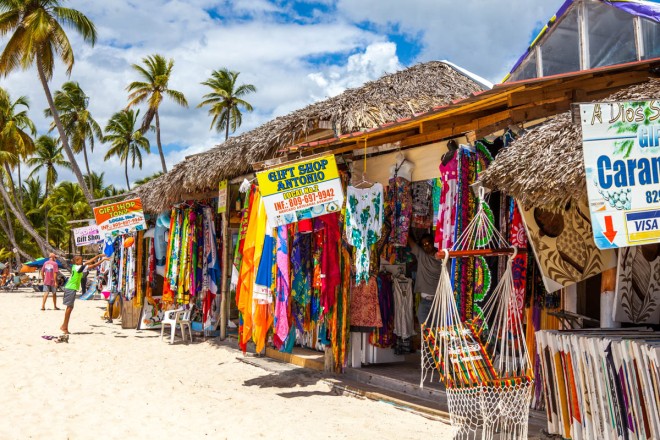 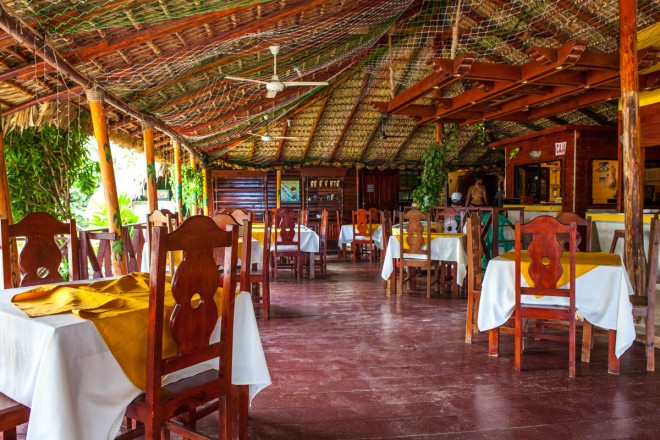 The little restaurant we found on the beach before most of the crowd showed up.

Our view from our lunch table.

Usually, when visiting a country, we either take a tour or rent a car. Here, in the Dominican Republic, we decided a car would be advantageous as we could get a few errands done such as grocery shopping and finding a hardware store in addition to doing some sightseeing. We spent several hours just driving around Cap Cana one afternoon and then, the following day, we took a drive to Bayahibe, a small town that used to be a fishing village, but now is the home to many big and beautiful resorts. We found a public beach and enjoyed strolling around before having a lovely lunch in a restaurant on the beach. Of course, it is always entertaining to order in a country that speaks very limited English. My rusty Spanish worked pretty well, but we did laugh that we ordered two different items, mine three hundred pesos less than John’s, but we both got the same exact lunch. The waitress called them by different names as she set them down, and I only had to pay 600 pesos for mine while John’s was 900. It was delicious though, and just another part of the adventure.

So, tomorrow we leave Cap Cana and go to Samana. There we hope to see some of the humpback whales that enter the bay for breeding season and we will spend a few days in a national park we missed on our way south. Again, the weather doesn’t look perfect, so I will stick on a patch and hope for the best. But no matter what, we know how fortunate we are to be healthy and able to live this dream of ours. We know each day is a gift and tomorrow is not guaranteed. We send special love to a very dear friend who is going through some tough health issues now. Be brave, we miss you and love you.

Here is where we are today: