I don’t know when it was that I first heard about Tangier Island, but I know it was a long time ago. As you may have realized by now, remote places fascinate us and Tangier Island fit the bill! The Chesapeake Bay is contained to the east by what is called the Eastern Shore; to the west of this shore, in the middle of the bay, is the small island known as Tangier. It is only accessible by boat or by small airplane and it has remained a world to itself. For me, visiting this island was a bucket list item and I couldn’t have been more excited to get there. 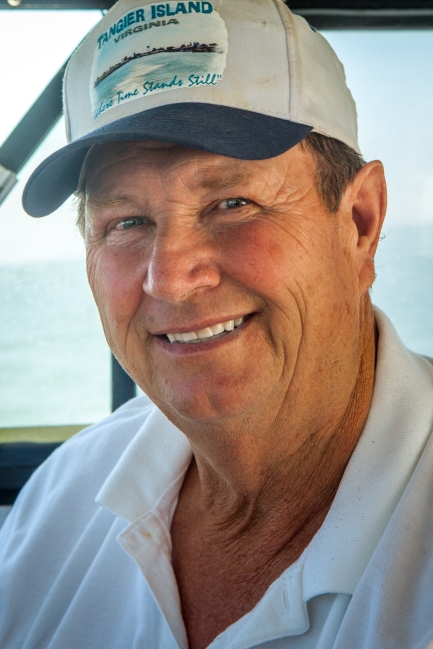 Captain Mark Crockett.  Crockett is one of the three most common names on Tangier.  The others are Pruitt and Parks.

Plenty of colorful lifejackets aboard the Joyce Marie Ferry to Tangier

After much research, John decided that taking AfterMath to Tangier could be difficult. The tides, the current, the lack of anchorages, and the small marina there all made the trip sound riskier than we liked, so we docked at a quaint little marina in Onancock (pronounced oh-NAN-cock, more to come on this town in another post) and found a small ferry at the same marina that made the trip to Tangier every day except Monday. The ferry is really just a crabbing vessel that has been converted to take passengers on the one-hour trip to the island. It is run by Captain Mark Crockett, who has lived his whole life on Tangier. He comes to the Onancock Wharf at 8:00 each morning makes a trip back to Tangier at 10:00 AM, returns passengers back to the mainland at 3:30, and then he heads back to Tangier again for the night at 5:00. Captain Mark was a very friendly man who ran a punctual and comfortable boat service. There are bigger ferries from other towns going to Tangier, but we were happy to be riding on this small vessel that made us feel part of the town before we even arrived.

Crab shacks in all states of repair line the harbor at Tangier. 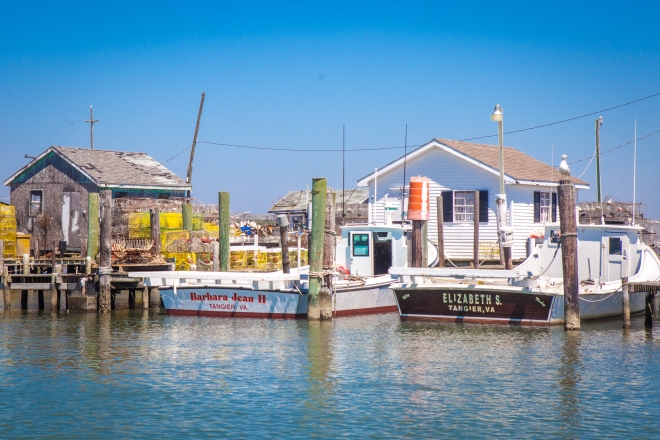 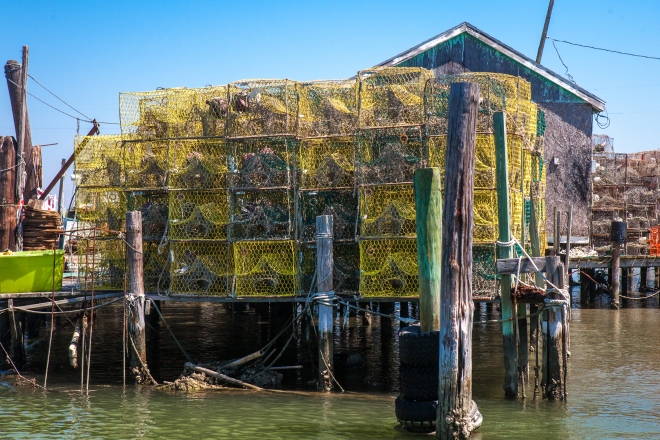 At the docks, this young man was happy to show off his catch of the day

Tangier Island has historically depended on its watermen. Crabs, oysters and fish have always been the main source of income, especially the crabs. The island is known as the soft shell crab capital of the U.S. and as soon as our ferry neared the island we saw a multitude of crab shacks on posts out on the water. In these shacks the crabbers keep their freshly caught crabs in large saltwater basins where they are watched over until they shed their hard shells. As soon as their shells are shed, the crabs are removed and packed up to be shipped to New York and other large cities throughout the states.

Milton Parks, at 86, is quite the legend.  He owns the marina and generally entertains everyone he meets. 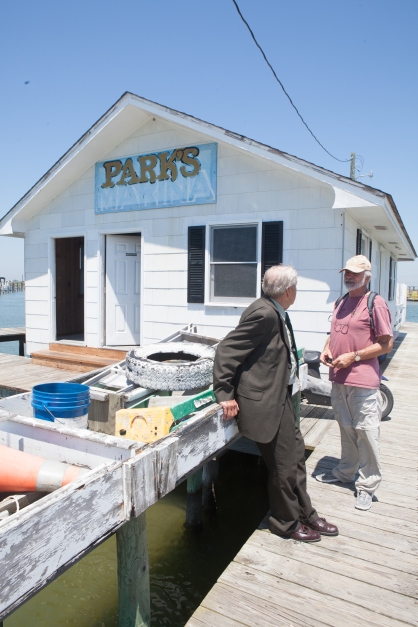 The walk around town brought us past some lovely houses and beautiful gardens. 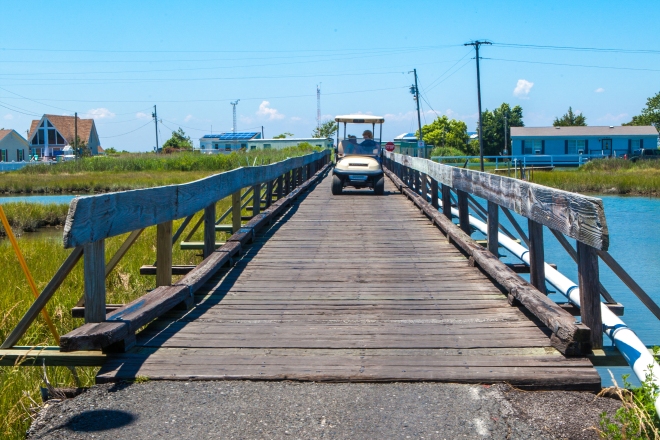 The most common mode of transportation on Tangier is the golf cart.  Bridges just aren’t wide enough for cars and it’s a very small town! A bed and breakfast on Tangier. 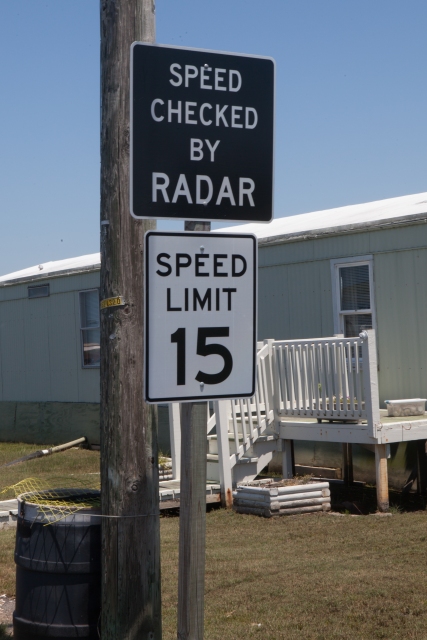 It seems that everyone drops their shoes off on the path to the beach. 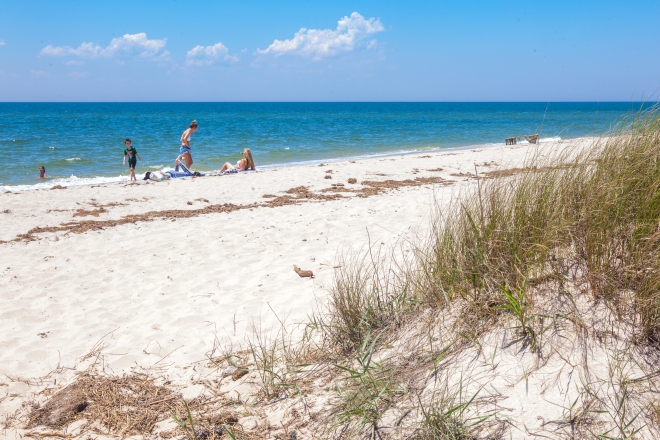 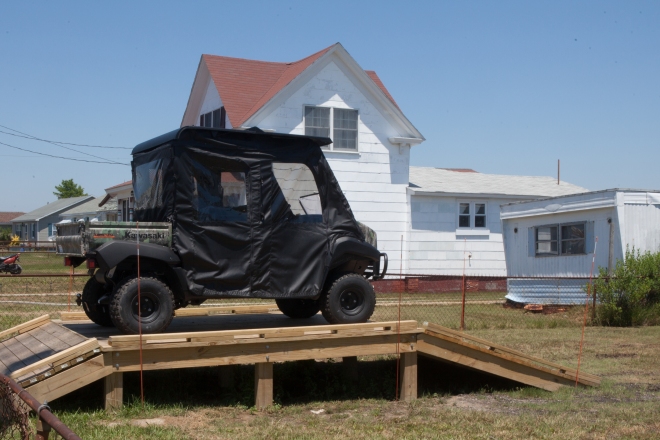 The maximum elevation of the island is 4 feet.  This is how many residents keep their vehicles just a little bit higher.

Many homes have graveyards in their front yard.  This is not being done anymore, but lots remain on Tangier. 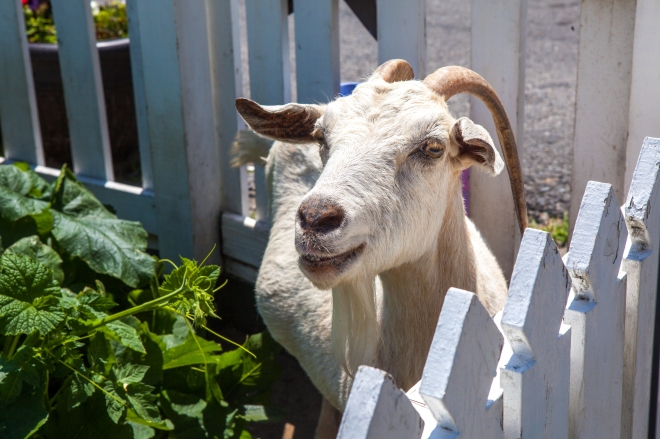 There seems to be an abundance of graveyards on Tangier.  This one is next to the Methodist Church.  Many graveyards have washed away as the island has shrunk over the years.

The island’s medical center.  Two nurses live on the island and a doctor comes in once a week.

Boats bring mail in each day.  There is no mail delivery, though.  Residents must head to the post office to get their mail.

Another interesting characteristic about Tangier Island is the language of the residents. Because almost everyone on the island is a life long resident, descended from English settlers almost 400 years ago, the dialect has remained unique and charming. It is hard to explain, but, to me, it sounded somewhere between a southern accent with an Irish tone but it is described to be more Elizabethan than anything else. 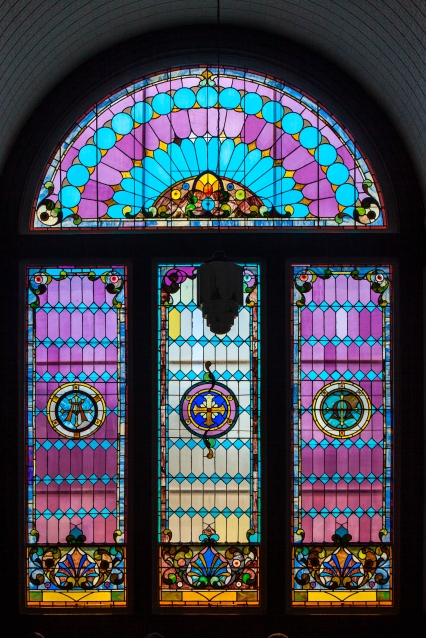 Tangier is an island that is strongly based on religion. There are two churches in town, one Methodist and one non-denominational Christian church. Most businesses are closed on Sunday and there is no alcohol sold on the island ever.

Unfortunately, Tangier Island is shrinking. It is shrinking in economy, population, and physical size. The economy is shrinking because of regulations placed on the crabbing industry by our government. Watermen have had five months of crabbing removed from their season, and, while the cost of gasoline, maintenance, and crew has risen, the price paid for crabs has remained stable over the years. This means that many of the watermen are giving up their businesses and are becoming tugboat crew on the Chesapeake Bay. Islanders are trying to improve their tourist industry by adding little gift shops, but there are only a couple of restaurants on shore and only two were opened yesterday, Sunday, when we visited. 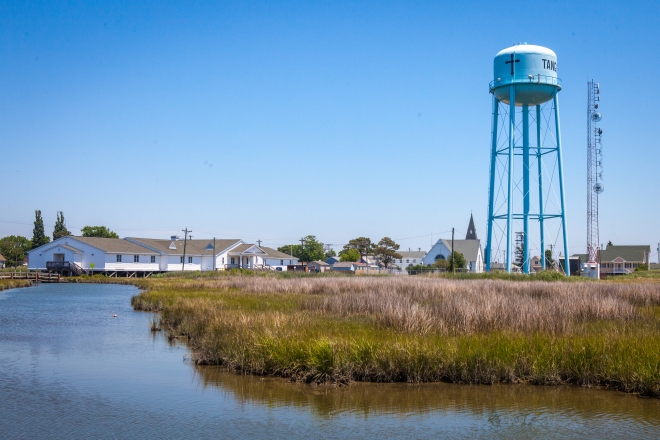 The white building on the left is the K-12 school.  All of the teachers are life long residents.  They go to college and come back to teach here.

There is only one school on Tangier and it houses grades K – 12. On average, eight or less students are in each grade. Every grade does have its own teacher, though, and high school students are provided with teachers for each subject as well as the opportunity to take distance-learning classes. The boys of the graduating class traditionally went on to work with their fathers on the water, but in the past few years they have, instead, joined the military or gone on to college, most never returning to live on Tangier. That fact and the fact that the island is physically shrinking due to erosion and literally sinking land, has brought the population down from 727 residents in 2010 to about 450 this year. It is expected that Tangier Island will completely disappear in the next 30 years if something is not done to stop the loss of acreage. Heading back to the dock.

Our ferry, the Joyce Marie.

So, this trip to this beautiful, quirky, friendly island with the proud, friendly people who live there was pure joy for me. We left the dock in the morning, took a $5 a person golf cart “historical tour” that encircled the whole island in 15 minutes, had delicious crab cake sandwiches at Lorraine’s for lunch, walked to the marina to meet Milton Parks, an 86 year old legend who owns the marina there and who entertains without even trying, walked to the beach, walked the one and one-half mile circle of the island, were stopped by some local residents just to chat and hear about where we were from, checked out the museum and watched its video, went in to see the gorgeous historic Methodist Church there, and returned in time to get back on the Joyce Marie that brought us back to Onancock. This was a day I will always remember. It is probable that this island will disappear in our lifetime. It was a glorious way to spend a day and it reminded us again to live our lives when we can. Tomorrow is never guaranteed.