We have never been repeat vacationers; never been ones to return to the same place year after year, or really, even more than once. Perhaps we are adventurers, or maybe we just have a bad case of wanderlust. There is so much to see in this world, and even at the expense of sometimes not exploring in depth; we have always wanted to see as much as we can. Going back to the same destination means one less adventure to be had. But there is one exception we have found in our travels, the British Virgin Islands. Our first trip to those beautiful, welcoming islands was over thirty years ago when we first sailed with our friends Alex and Marty Jakimenko and Rich and Jan Grady. The next visit was with our kids when they were teenagers, probably 18 or 19 years ago. We returned again with Jason, Kelly and Craig, and Jeff 9 years ago. Each of those times we chartered a sailboat and each of those times we thought how wonderful it would be to travel the islands on our own boat. Finally we made it. We received a text from Jason when we arrived here. He put it perfectly when he said, “The BVI on your own boat. That’s a dream come true.” 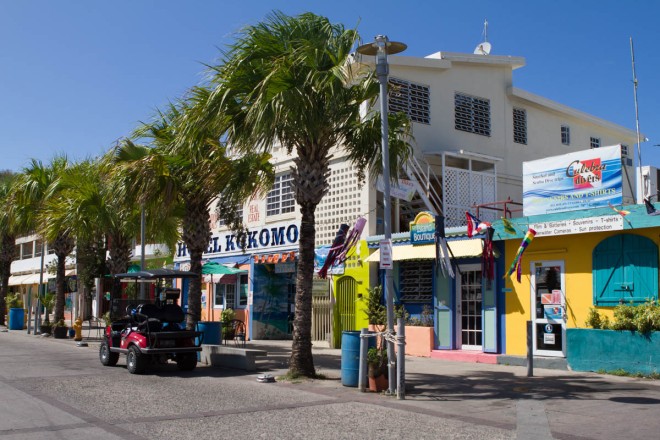 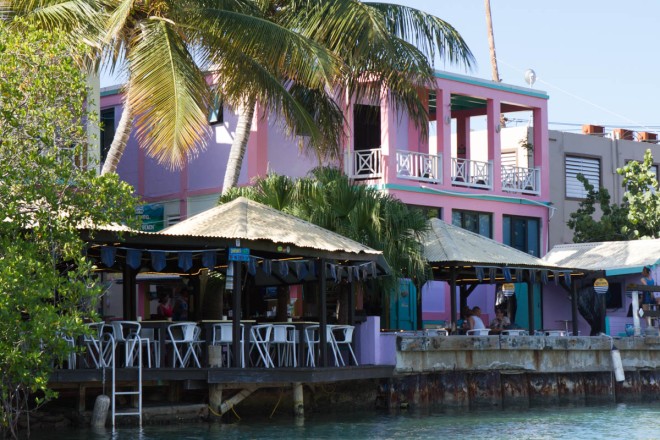 I hope he misses the bird!

Leaving Puerto Rico on May 19th, we started off for the four-hour crossing to Culebra. Craig, on La Sirena, had left the day before while we were still trying to get the Great Computer Debacle straightened out and he was waiting for us in an anchorage there. Again it was a rough crossing and again things that had never moved before flew around the salon; this resulted in securing me to my seat and terrifying both dogs. We arrived unharmed, had lunch, and then took the dinghy to the Dinghy Dock Restaurant to tie up and to walk around the pleasant and colorful town there.

We have noticed that, in many towns in the Caribbean, schedules lack any importance. During our walk, Craig wanted to stop at the little grocery store. The hours were clearly marked 9:00 to 5:00, and there was a sign that said OPEN, but the doors were locked and no one was around. We made our way back to the restaurant and got something cold to drink while we watched the resident tarpon swimming right next to us. About one-half hour later, Craig walked back up to the store and, sure enough, it was open again. You just have to be flexible around these countries! 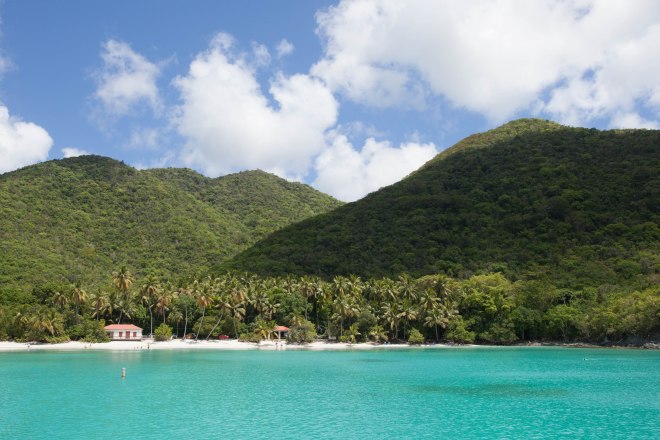 The buddy boats at their moorings. 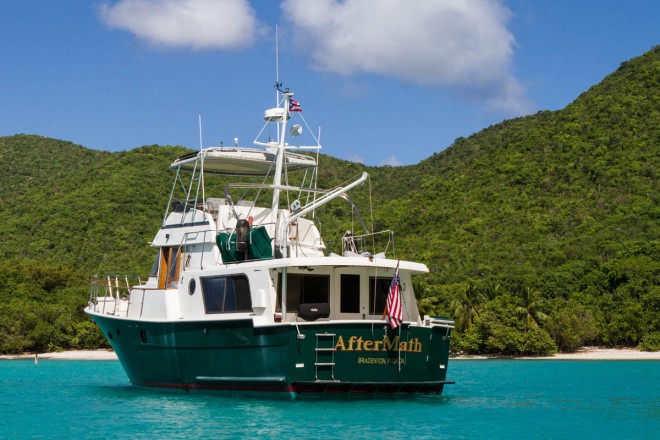 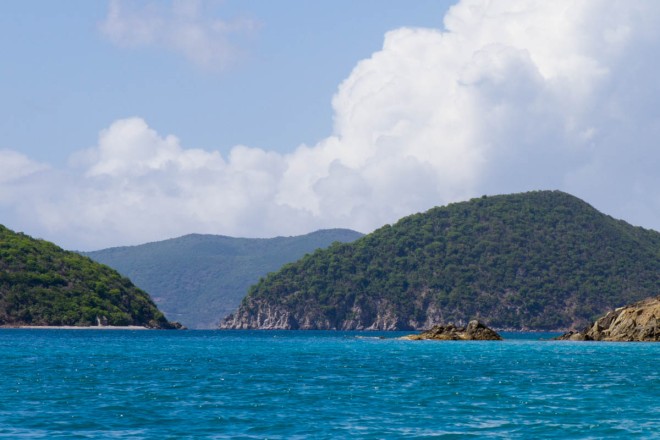 This boat came in to Mahoe Bay.  It’s not quite the classic look that AfterMath has, but it’s eye-catching! 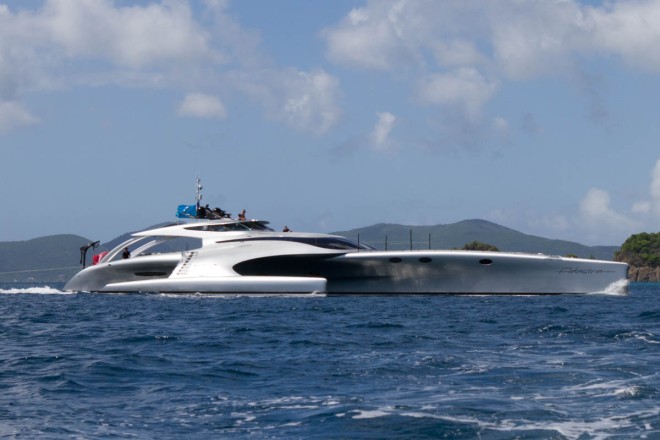 The next day we finally had a calm, pleasant ride to the Virgin Islands. As soon as we got near the islands we both noticed a beautiful scent, which grew even stronger in the anchorage. The aroma reminded me of jasmine and frangipani flowers. In St. John, surrounded by green palms swaying in the gentle breeze, warm, salty, turquoise water lapping quietly at our boat and the shore, and smelling that intoxicating aroma, we rediscovered that these tropical islands have a way of awakening every one of our senses. We toasted our arrival in the Virgin Islands, sitting at the bow, congratulating ourselves for really making this voyage.

We have never spent much time in the U.S. islands in the past as our focus has been the BVI and, once cleared through, it is easier not to have to go through customs and immigration again. This time, however, we started our Virgin Island experience in St. John. Mahoe Bay is part of the Virgin Islands National Marine Park; it is just spectacular and there are places to snorkel right near the mooring field.  In both the U. S. and the British Virgin Islands, moorings are secure and readily available. Much damage is caused to reefs when boaters use their anchors, as coral is easily broken; moorings prevent this damage.

On our way to Leinster Bay

Another beautiful beach in the bay. 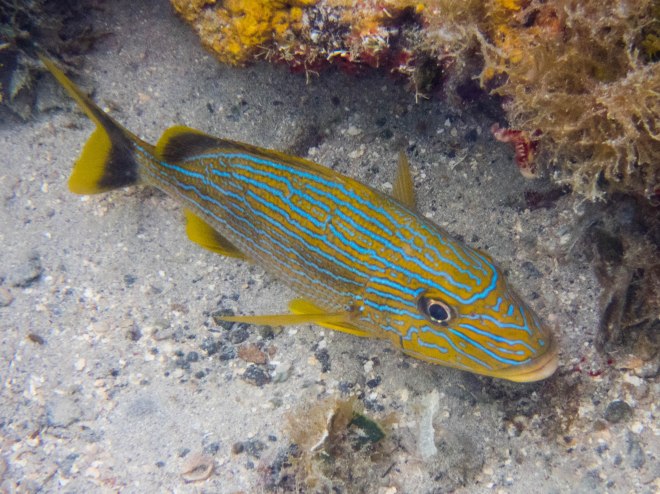 I sure am glad I asked for that underwater camera on my last birthday!

After a night in Mahoe Bay, we moved to nearby Leinster Bay. Another beautiful anchorage in the National Park with nearby snorkeling, Leinster Bay is also very close to Tortola, BVI, where we would clear customs on Sunday morning.

Traveling with dogs is not quite as easy as traveling without as there are many rules and regulations that should be followed. The BVI has some of the strictest rules about getting a permit, but we had emailed the authorities there early and had all of the necessary test results and inoculations. (Thank you, Kelly!) The only problem was, the communications we received about the actual entry were numerous and kept changing. First they wanted to know where we would be clearing so they could courier the permit there. Then they said they could not send the permit, and they needed to know what day and what time we would be arriving because without providing this information we would likely have to wait at least 3 hours for someone to show up. By now, if you have read much of our blog, you know that dates and times are pretty hard for us! Finally after several emails, we decided on Sunday morning at 9:30 in Soper’s Hole on Tortola. The next email told us to call “Deveaux” an hour before we arrived at the port. Soper’s Hole was only a couple of miles from Leinster Bay, so I started calling Deveaux before we even left. Of course, I could not get an answer. Finally, as we were pulling in and picking up a mooring, Deveaux called and asked when we would arrive. I told him we were all ready in the port, and he asked me to have John leave the dogs on the boat and have customs call him while checking us in. John did as asked and customs made the call. Deveaux was apparently a vet who needed to approve the dogs, which he did – over the phone! As it turns out, no one in any country has really wanted to see any the dogs or proof of their immunizations and we are beginning to think that all our work trying to be vigilant is fruitless. 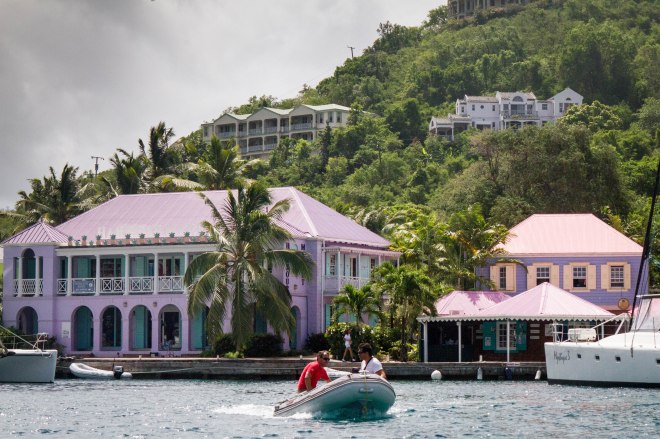 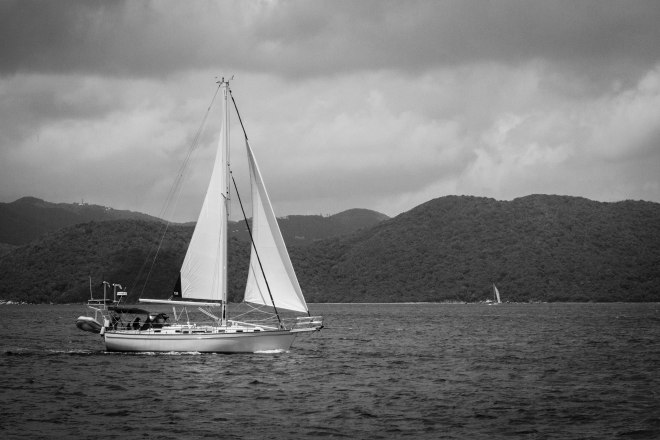 La Sirena under sail on our way to Jost Van Dyke

We made it!  One of my favorite spots in the world. 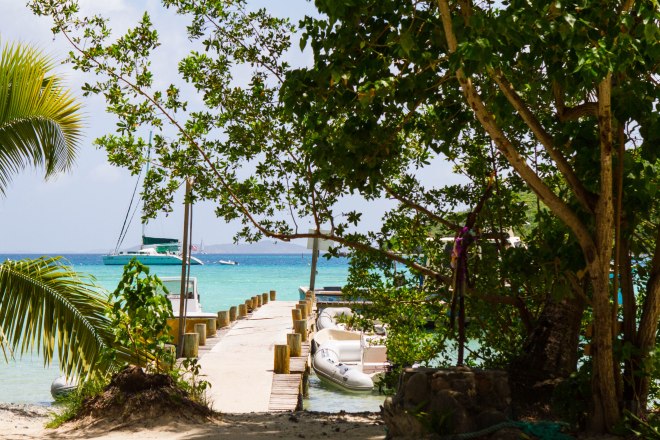 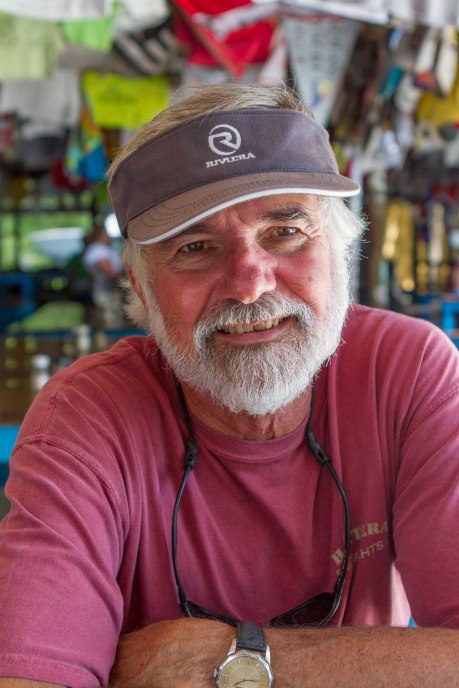 And Captain Craig.  It seems gray beards are not optional! 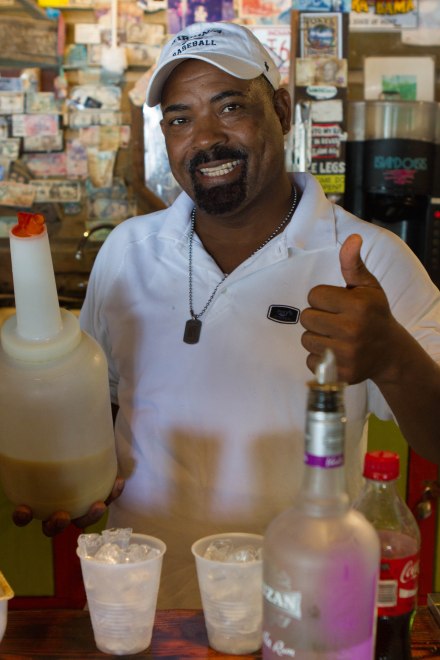 This adorable little guy was happy to pose with his biggest smile.

That’s AfterMath out there!

Sights along the road in Jost Van Dyke 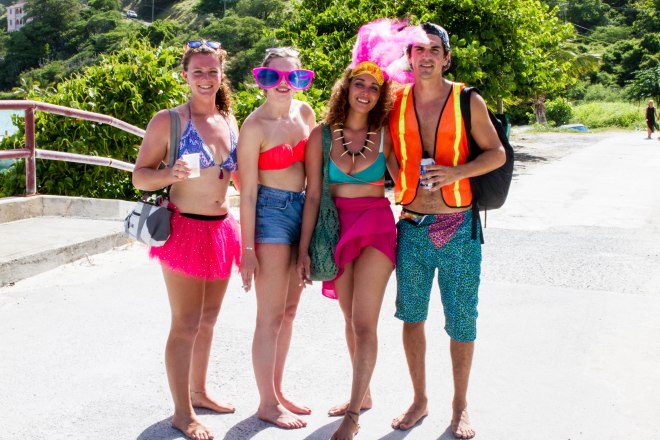 We had never been in Soper’s Hole, so we took the dinghy for a little ride around the busy bay before heading to one of my favorite spots in the world: Jost Van Dyke. Jost Van Dyke is the home of Foxy’s Tamarind Bar and Grill. When we first saw Foxy’s, over 30 years ago, it was a tiny little bar at the end of the street with a few picnic tables and nothing else. Foxy, the owner, sang and told stories and entertained every customer there. Now Foxy’s is much larger, and has four bars and a gift shop, but the atmosphere has not changed at all. This was the only time we have been there when we didn’t spot Foxy himself, but it was still wonderful to be there. There is just something about that place that lets you know you have arrived in Paradise.

After lunch at Foxy’s, John and Craig went to take care of the trash and I walked along the main street to meet them, taking pictures along the way. People always talk about how much more built up Jost Van Dyke is than it used to be, but the truth is that, while the dirt road now holds a few more businesses than it used to, they are little more than tiny open- air sheds or shops and they do not change the feeling of the island at all. Great Harbor now holds moorings and there are a lot of boats there, but there is plenty of room for everyone and everyone seems to have a wonderful time. And in the morning, you can still hear the wild goats calling from the hills.

The tarpon that come to be fed at Saba Rock 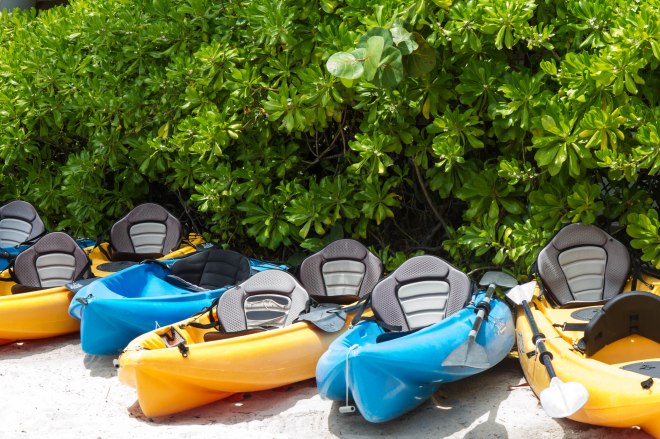 That is Saba Rock in the distance 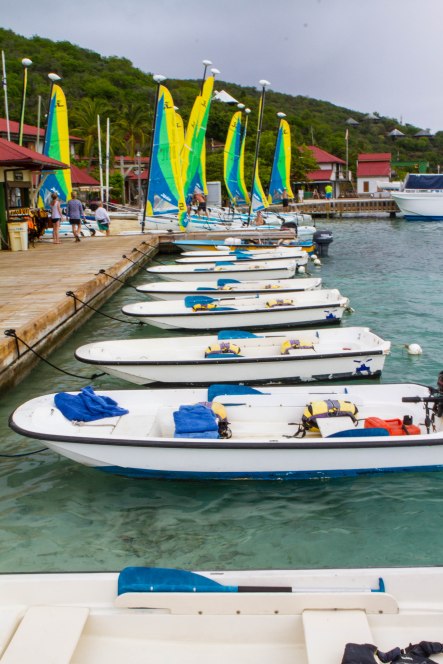 Waterspouts about at Bitter End 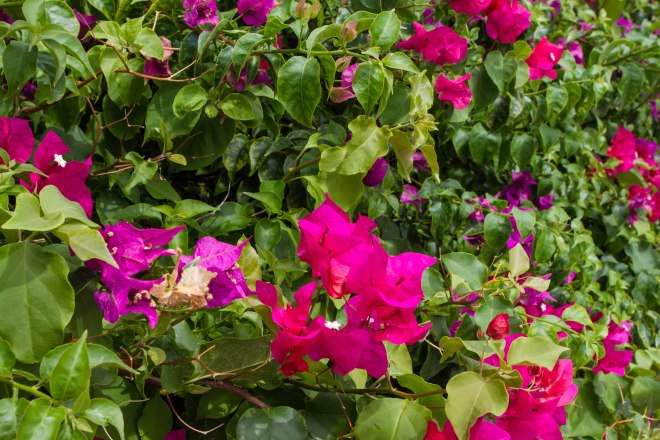 Leaving Jost Van Dyke yesterday, we traveled to the Bitter End Yacht Club on Virgin Gorda. In the BVI, the islands are close and often offer protected waters, and true to form, it has been so wonderfully pleasant here. Our trips are short and the water is generally calm. We are now fast tracking a little bit on our way to Grenada for hurricane season, so we are missing some of our favorite islands, but we plan to take more time through them on the return trip. Just across the inlet from the Bitter End is Saba Rock Resort. It is, quite literally, a resort built on a very large rock with room for just a little grass and some hammocks behind it. We went to Saba Rock for their happy hour that ends with quite a ceremony for feeding the tarpon that live there. In typical tropical island form, everything happens with a story, and the gentleman who fed the tarpon turned it into an event, letting people take turns and throwing food very close to an occupied dinghy so the fish would jump and splash trying to grab the tasty treats.

The original plan was to leave Virgin Gorda yesterday, but, as always, we a waited a day for better winds and seas and will leave today, Wednesday, July 25th. The delay was great news for me, as I never have had the time to fully explore the gorgeous Bitter End Resort. Yesterday was a joy; while John was planning our trip south, I went to shore for a few hours getting some good shots and then spending some relaxing time at the pool that overlooks the bay. After John picked me up in the dinghy we enjoyed a happy hour aboard with Nicki and Andy who arrived on their sailboat, Intrepid, Monday right after we did. We first met the Intrepid crew when we were in Georgetown in the Bahamas, then we docked next to them in the Turks and Caicos, and found them again in Puerto Rico. We were happily surprised when they grabbed the mooring right next to ours on Monday.

So, today we leave the British Virgin Islands and head for the Leeward Islands. The first stop, after an overnight 16-hour trip, will be St. Marteen. Once again I can’t wait to come back. I know I will discover islands along the way that will draw me in and that I will come to love, but I think I will always have a soft spot for these gorgeous British Virgin Islands to which we have returned over and over. 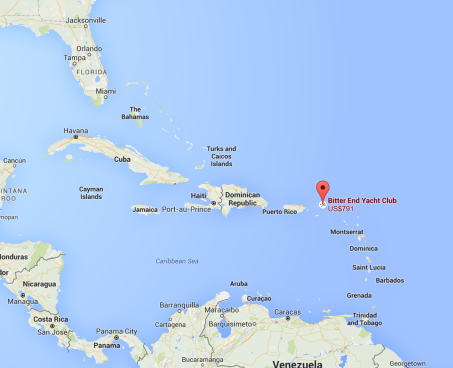