When you think of the holidays, what do you imagine? We think of Christmas trees and decorations, shopping, wrapping gifts, children singing, pageants, Santa, snow (well, maybe we don’t hope for snow, but it is pretty traditional), and New Years Eve, but especially, above all, family. Our holidays were all of these and so much more. This was a year of joy and happiness; it was wonderful to be able to spend time with those we love so much.

We left Cumberland Island on December 1st and motored to Jacksonville. Our first night was spent at the Sports Complex there, and the following day we completed our journey up the St. John’s River, and then the Ortega River to Lambs Yacht Center. Lambs has been our marina of choice for the past three years, as, while we are out having fun with the family, they are busily performing AfterMath’s annual maintenance. 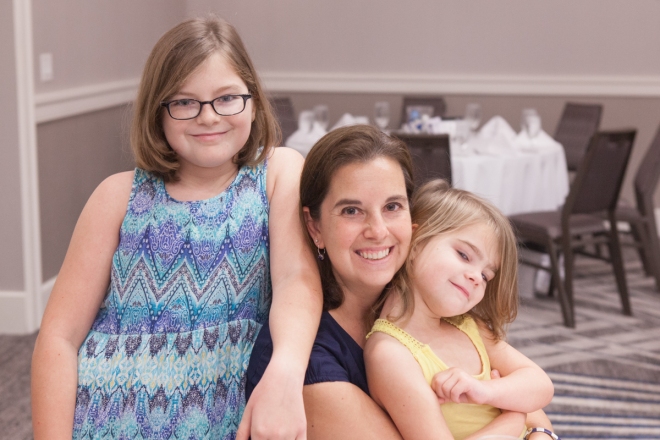 At the Nutcracker Ballet Tea

Michaela with some dancers

First on the agenda was a Nutcracker Ballet Tea for Kelly, Michaela, Madison and me. Before the show began, tea sandwiches and pastries were served, along with hot chocolate with all of the fixings, and, of course, tea. After lunch we all enjoyed watching the dancers perform in their beautiful costumes, and the girls loved getting to meet and greet the cast when the show was over. 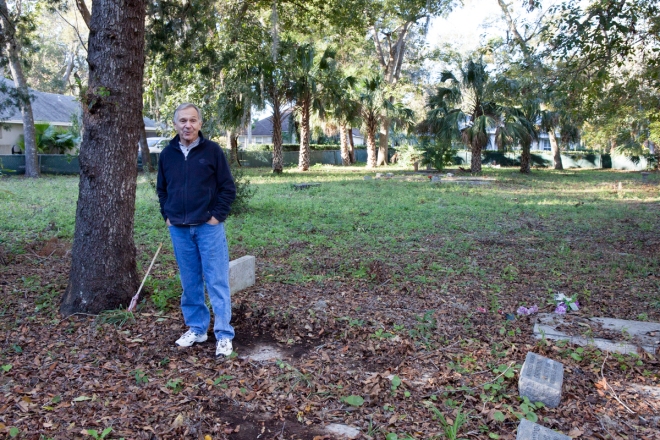 Rich and Kathy live next to this cemetery on Amelia Island that is for only descendants of slaves.  He had never been in it and it is locked so he and I climbed over the fence and went in to check it out.  Surprisingly, most of the graves were fairly recent as seen on the stone below.

Soon it was time for AfterMath to be hauled, so John and I moved in to Kelly and Craig’s house for about a week and a half. We took a couple of nights during that time and went to visit Rich, John’s brother, and Kathy in their home on Amelia Island.

Michaela was the most colorful elf in the show! 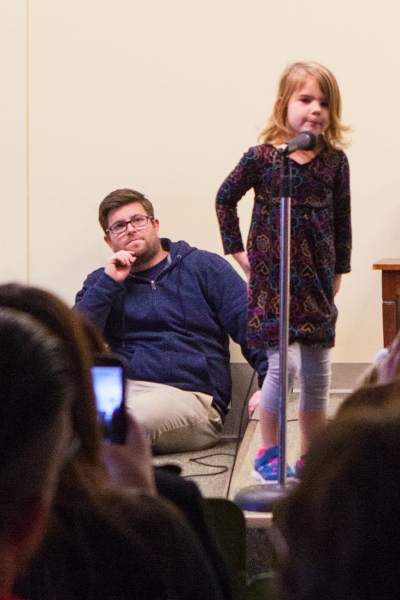 Madison had the most important line in the show, “Mary had a baby boy.” 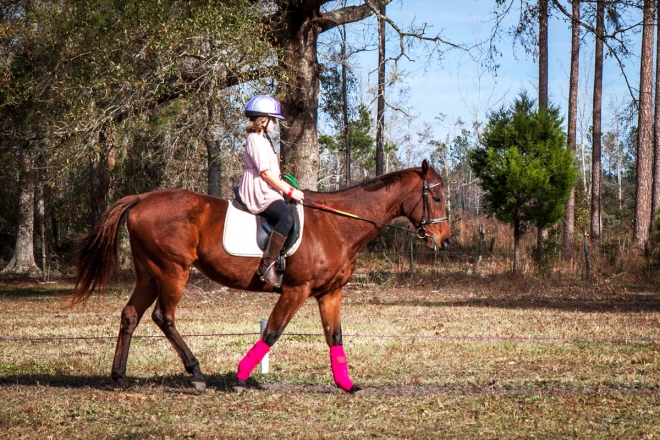 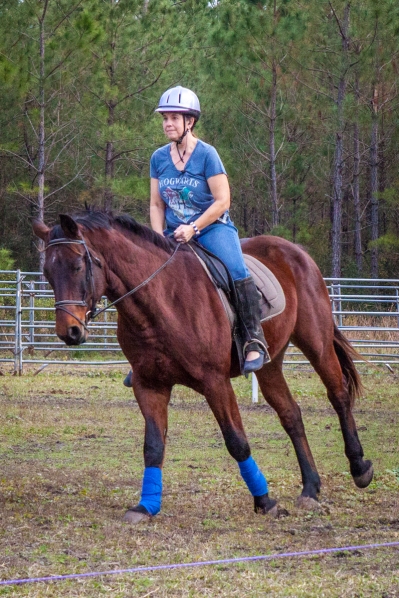 I love to see Kelly ride.  It brings me back a lot of years to when she was a young girl taking lessons. 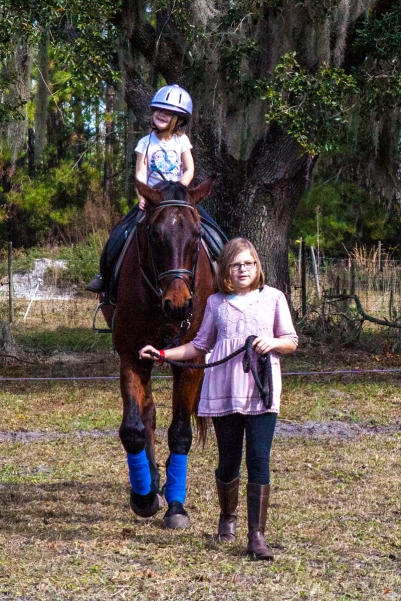 And then there is Madison, who loves being on the back of that horse.

Carter seemed to prefer the golf cart with his animal buddies nearby. 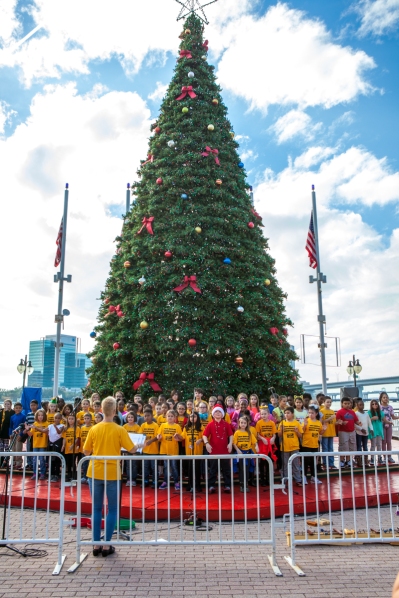 The concert at Jacksonville Landing

That’s my Michaela in the back with glasses 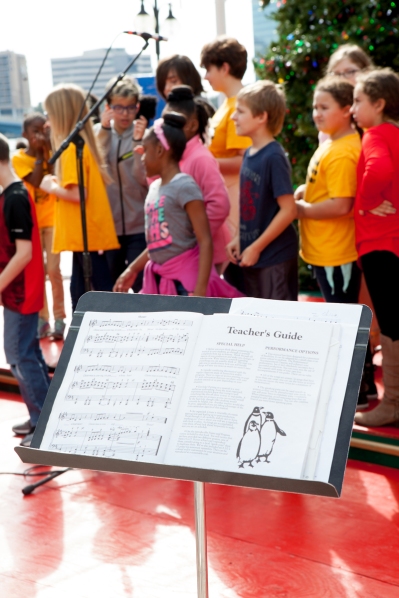 Now at the Jacksonville Airport

Some of the many trees in Jacksonville Airport

After we returned to Jacksonville it was time to start watching those precious children’s Christmas shows. First came Michaela’s show at school, then Madison’s Pre-Kindergarten pageant, then two more for Michaela: one at Jacksonville Landing and one at the Jacksonville Airport. In between all of the Christmas shows there was time for a day of horseback riding lessons as well. 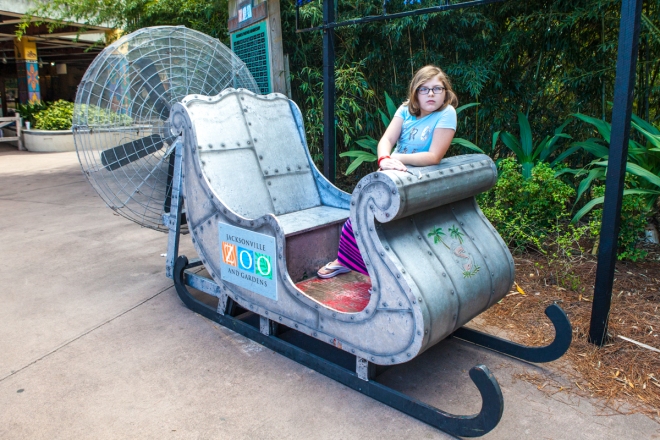 Maybe Santa comes in an Air Sleigh in Florida 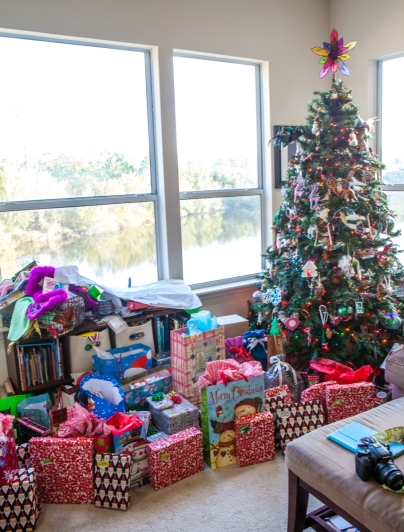 Jason and Jace, all dressed up.

School let out for the holidays, so Kelly, the kids, and I made a trip to the always fun Jacksonville Zoo to help speed up the time left before Christmas Day. Finally, though, the big day came and everyone was thrilled with all of the new things Santa brought in his sleigh. Also on Christmas Day, Jason and Lisa arrived, bringing the adorable little Jace with them. Jace, who we FINALLY got to meet at 7 months old, is the son of Lisa’s daughter, Ashley, and he is now a new and wonderful part of our family.

Jace and Kirby after a very long day.

Meet the precious new addition to our family, Jace. 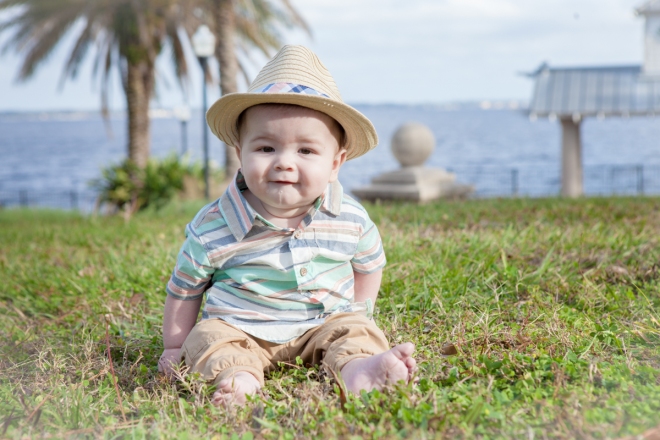 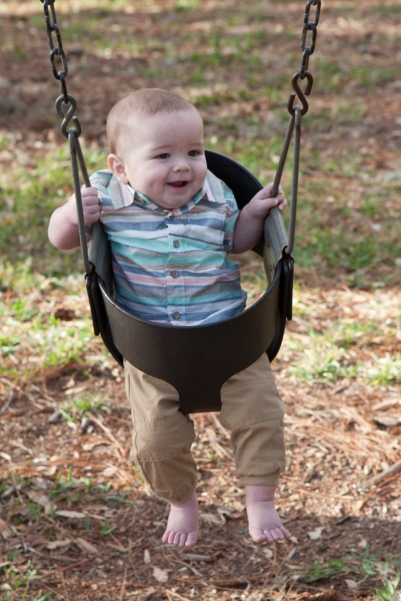 Santa may have left a reindeer for us to treasure.

After a long and perfect day at Kelly and Craig’s house, Jason, Lisa, and Jace followed us back to AfterMath to spend the night aboard. It was especially nice to have them around, as the day after Christmas is Jason’s birthday. We all relaxed over breakfast, watching Jace play happily. In fact, he is such a happy little baby and never seemed to cry about anything at all, except maybe when John took a dog bone away from him! Later, we had a great dinner, then took Jace to the park for a photo shoot before they had to head back to New Port Richey. 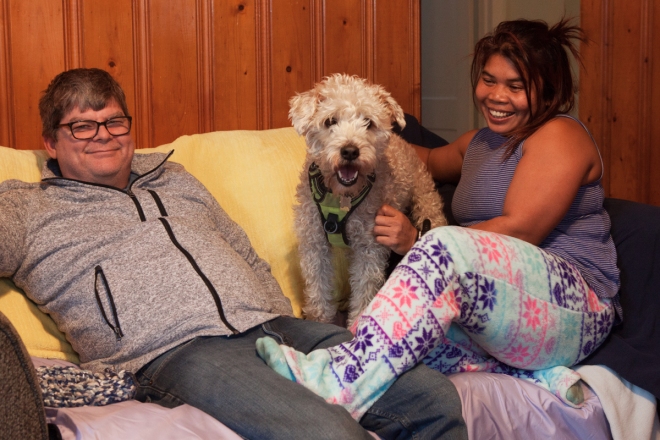 Scott an Noi with Kirby

The holidays were far from over for us though, as, on December 27th, we started out on a road trip to Annapolis to visit Jeff, Sarah, Walter, Rush and Ford. Before arriving at their house, though, we made a stop at our boating buddies, Scott and Noi’s, house in a neighborhood near to Jeff. Rather than board our canine crew, and rather than take him to Jeff and Sarah’s (Sarah and Walt are allergic to most dogs), we took Scott and Noi up on a year old offer to take care of Kirby whenever we went away. It may not have been the Caribbean anymore, but Kirby was just as excited to see them as ever. Hearing Noi yell, “Kirby”, in her Taiwanese accent was a joy to all of our ears. We were happy that they could join us for dinner on Friday night at Jeff and Sarah’s. I’m sure both couples felt as though they knew each other from hearing so much from us about the others.

Making a whirlpool at the Science Museum in Baltimore 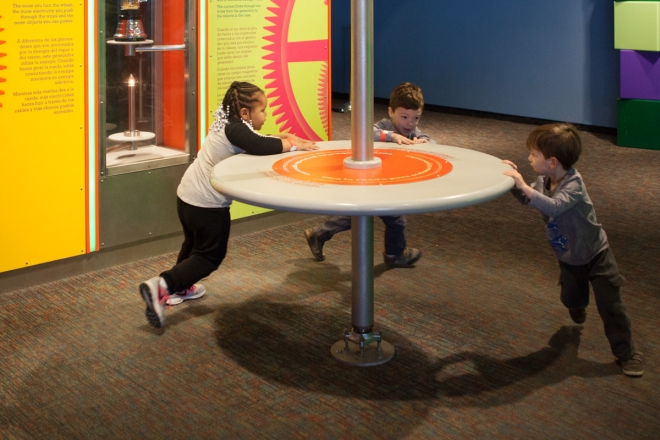 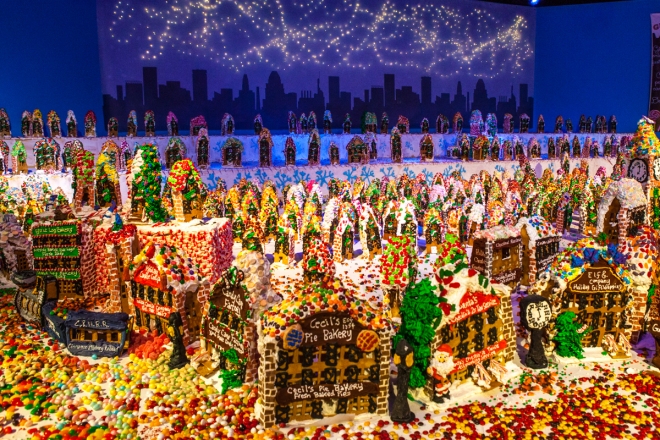 Beautiful Baby Ford playing in the baby room at the museum

It was Christmas all over again with Jeff’s family, and we took great joy in seeing all of them, of course. On the 28th we all loaded into their Land Cruiser and headed to the Science Museum in Baltimore for fun at the displays and a trip to the IMAX Theater. John and I had never been to that museum and I believe we had as much fun as the boys did checking out all of the different rooms and experiments. 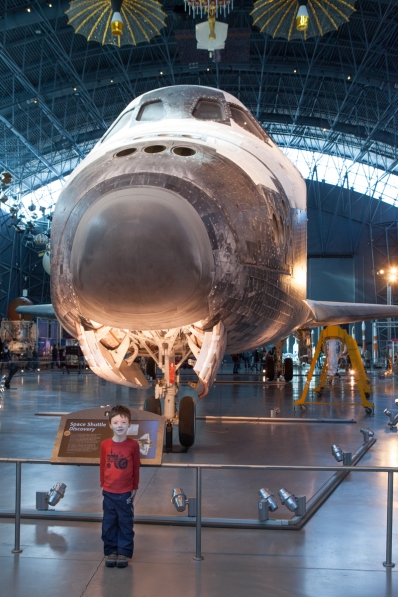 Walt and the Discovery Space Shuttle. 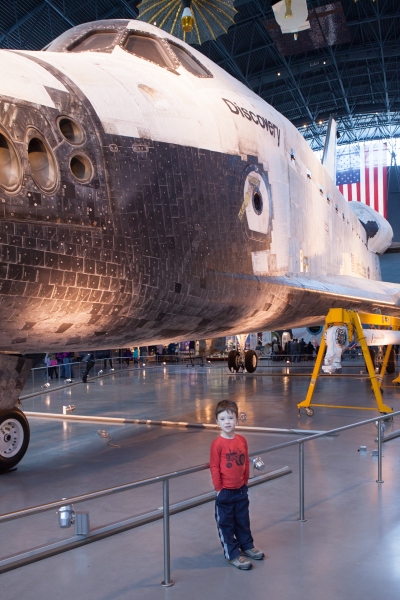 Rush seemed to like this little plane that really flies.

The Concord.  I would have liked to have flown on that!

Jeff, Rush, and Ford checking out the Coast Guard exhibit. 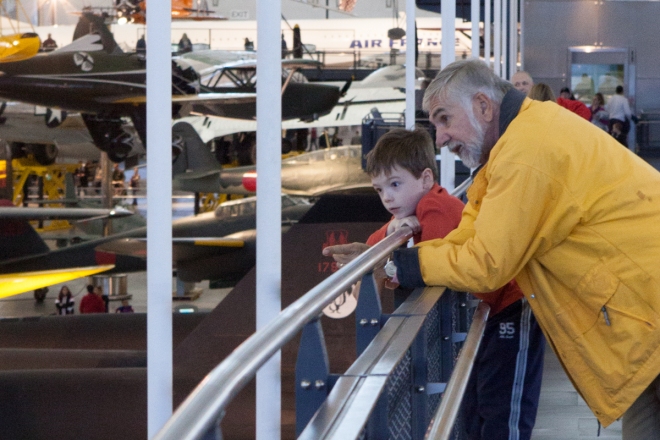 For those of us who have known and loved John, this is a typical picture of him showing us something we are all interested in.  Here, Walt seems to be loving what his Bop has to say.

Ford is just happy to be alive no matter where he is. 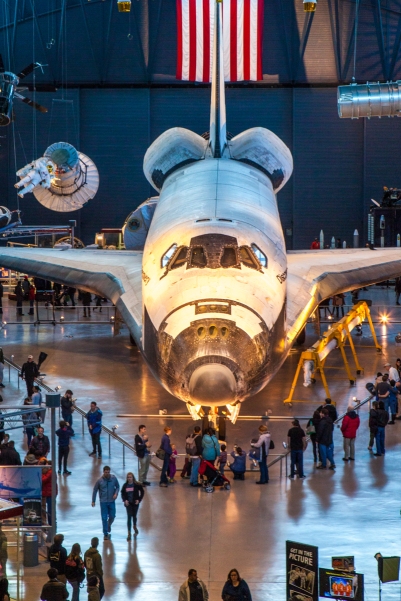 The last view of the Discovery.  It’s really beautiful

It snowed a bit one night while we were in Annapolis, but not enough to stop our next museum trip to the Smithsonian Air and Space at Dulles Airport. John and I had asked Jeff if we could take Walt and the others to the Air and Space Museum while we were in DC, as Walt loves all things that fly, and Jeff suggested the Stephen H. Udvar-Hazy Museum, a second location of the Smithsonian Air and Space Museum . It turned out to be absolutely amazing. Walt is fascinated by the space shuttle, and here, right in front of him, was the Discovery. He was so happy to see it and continuously asked for me to take pictures of the amazing space ship. The whole day was a complete success for everyone, and one we will long remember. 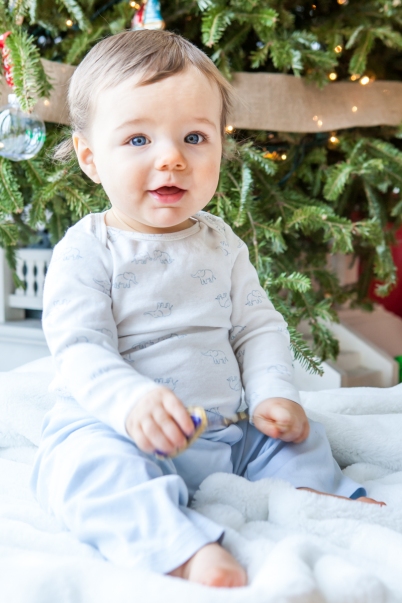 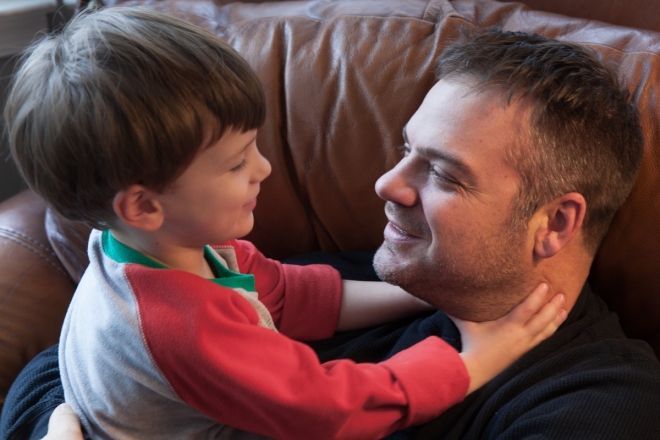 Jeff and Rush enjoy those cuddles 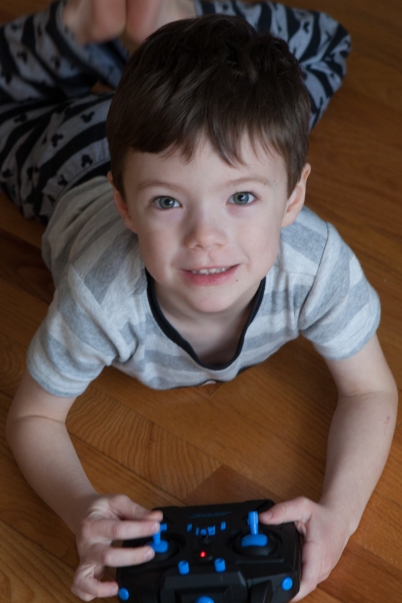 John and Walt using Walt’s new lathe and my dad’s chisels, which are stored in the box he made for them.

OK, I admit it, I’m a sucker for those little hands

Rush, you are never sure what he might say next. 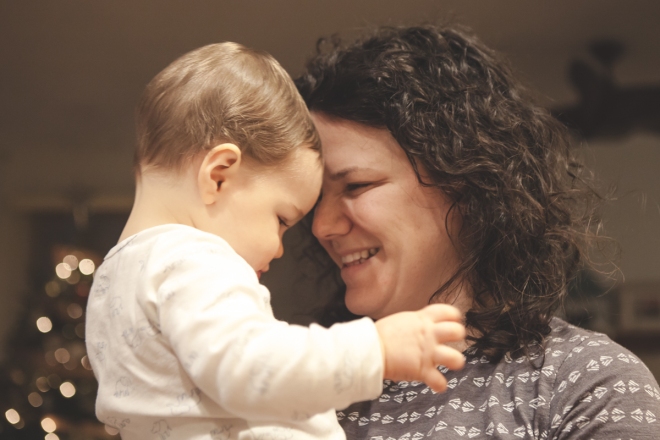 Sarah and Ford.  Love at its best.

We stayed in Annapolis until January 1st, with Jeff and me the only ones who made it through New Years without a nap. Sarah had to work all day on New Years Eve, so she was excused, and John had to drive all the way back to Jacksonville the next day, so he was excused too. Nevertheless, the New Year came, and it was wonderful to spend it with our family.

Carter and Michaela shared my gloves (which I happened to have along because we went to Canada).  Kids in Florida don’t have gloves! 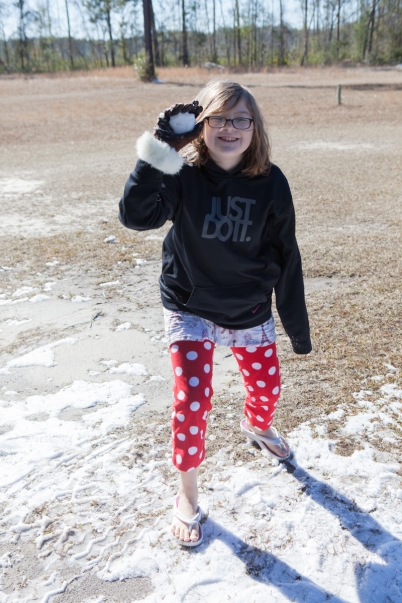 To those of us who grew up in New England, this snow is nothing.  To Florida kids it is the world!

And off to Savannah the next day!

You just can’t talk Florida kids out of flip flops.  That’s Michaela, by the way.

They really wanted to make snow angels.  They must have seen this somewhere!

How could you not love this Savannah gentleman who offered to take our picture? 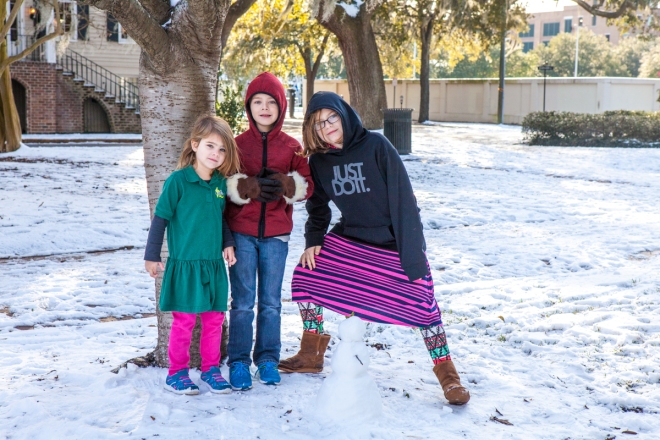 Beautiful Savannah in the snow

The drive back to Jacksonville was easier than the drive north, but we returned to cold weather here, just as we found in Annapolis. We really need to go where it is warm, and we are constantly reminded of Jimmy Buffett singing the same thought! However, the excitement here was that it snowed in Florida and Kelly’s kids were thrilled over that idea. It did not snow in Jacksonville, but it snowed in Georgia, which isn’t too far away, so John asked if we could take the little ones in search of the white stuff. We picked them up on January 4th, and started out on a path west of Brunswick, GA, where there it was. SNOW. Michaela had been in snow when she was 9 months old, but, of course, did not remember it, and Carter and Madison had never experienced it at all. They kept yelling, “SNOW” every time they saw a white patch. They were thrilled if more was on their side of the car than on the other. Although the best snow we found that day to play in was under a tree in a cemetery (no graves where the tree was), it was enough to give the kids more pleasure than we could have imagined. In fact, it was so much fun, that they begged Kelly to take them again the next day to find more. Kelly, always the amazing mom, agreed, and she picked me up so I could join the fun on a trip to Savannah, GA, about two hours away. There was enough snow in Savannah, to make everyone happy, and I believe the children will remember both days for the rest of their lives.

So, our holidays were perfect in so many ways. We saw every family member, we laughed, we played, we reveled in the company of those we love. It was the perfect season; full of blessing for all for sure. The following couple of weeks have been good too. I’ve gotten to see the kids and Kelly, I’ve had two successful cataract surgeries, and AfterMath is provisioned and just about ready to go; just a polish job left before we take off.

We hope you all have had as wonderful a holiday season as we did, and we wish you all the Happiest of New Years. Just remember to take time to hug your family, kiss those babies, and live your dream.