It all seems so different now.  We have left the hustle and bustle of the tourist towns, and we have left the Gulf of Mexico.  We are now traveling the rivers that run parallel to the shores that make up the ICW in northern Florida.  Tugs and barges pass us by, but not many other boats.  For the most part, our scenery is pure nature, except for the jets that fly overhead from the many military bases.  The sand is so white along the beaches that it blinds the eyes; the water varies from pure dark blue to aqua and is crystal clear. We stop at small cities and little towns to see what they have to offer. Shrimp, fish, and oysters abound in every restaurant.  We are traveling nearer to the heart of the country, and it is a fascinating experience.

Traveling along the river from Apalachicola to Port St. Joe 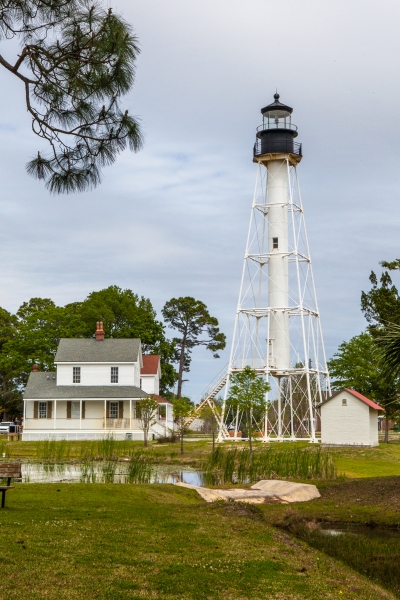 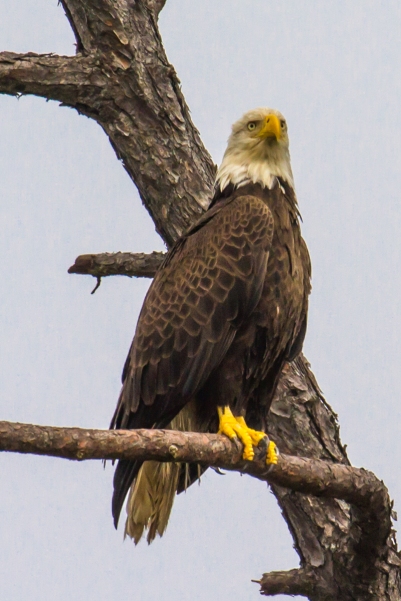 This beautiful eagle flew past us and then landed on a tree by the river.

John, hoping for a customer or two.

We left Apalachicola on April 8thand motored to the small town of Port St. Joe.  The marina there was very close to town so we were excited to take a walk.  There was a Piggly Wiggly grocery store and a hardware store nearby, but we didn’t really need much so we continued on our way to the town’s only attraction, a lighthouse.  We decided one night in Port St. Joe was enough.  Our next stop was Panama City, where we stayed for three nights, waiting for mail to arrive.  The marina, again, was very near the town, and we enjoyed walking around, checking out the shops, and watching beautiful sunsets.

The beginning of the “Grand Canyon” in Florida. 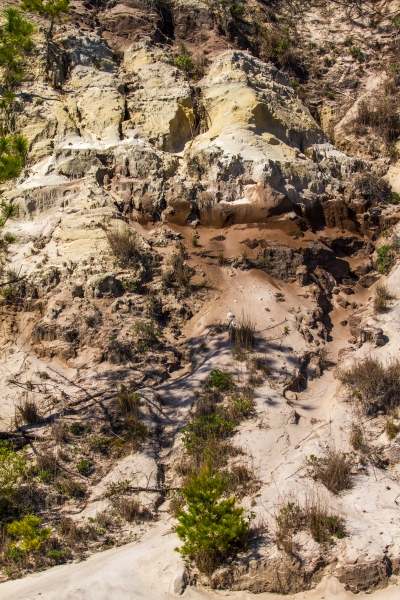 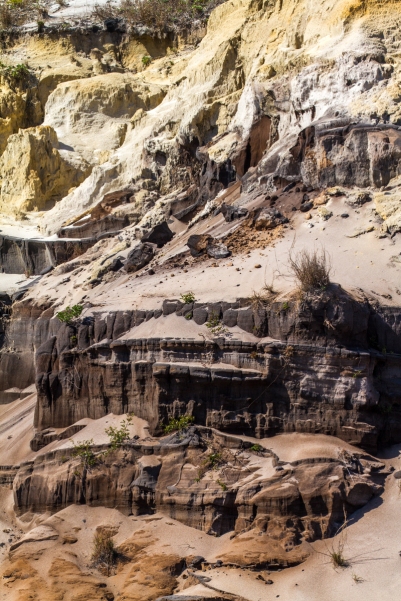 The scenery really began to change after leaving Panama City.  The river just seemed to be lined with trees, although, according to John, we were at the beginning of Florida’s “Grand Canyon”.  I had read about this area but just couldn’t really imagine where it was or what it would look like, and, at first, I was less than impressed. Soon, though, we could spot white cliffs in the distance, and before long beautiful formations in the sand appeared. The cliffs are probably no higher than 40 feet, but they have eroded into shapes that really do remind a person of the walls of the real Grand Canyon.  Colors vary from white to red and to brown to add to the beauty of the area. It was a wonderful ride along an untouched, peaceful river in north Florida.  We anchored that night in Joe’s Bayou, the perfect end to a lovely day.

A huge barge with its cargo. 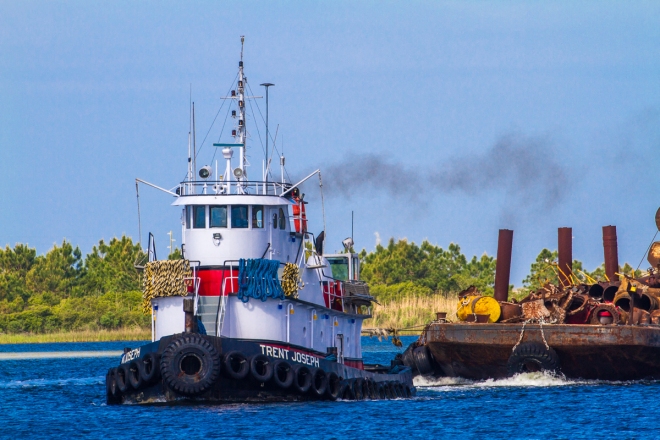 This was a great park with food trailers and places to sit along the street.

We didn’t get this, but some of my Facebook friends caught right on!

On April 13th, we arrived at Santa Rosa Marina in Gulf Breeze, FL.  It was John’s birthday so we walked to a great Greek restaurant nearby to celebrate.  The weather was not looking good for the next couple of days, so we just hung out there and caught up on reading and relaxing.  We left on the 16thand made the short trip to Pensacola, docking at Parafox Marina, another marina right in the center of the historic district. Walking around town here was a treat; the city has obviously been working hard to become revitalized, and the shops, restaurants, and buildings are in beautiful condition. 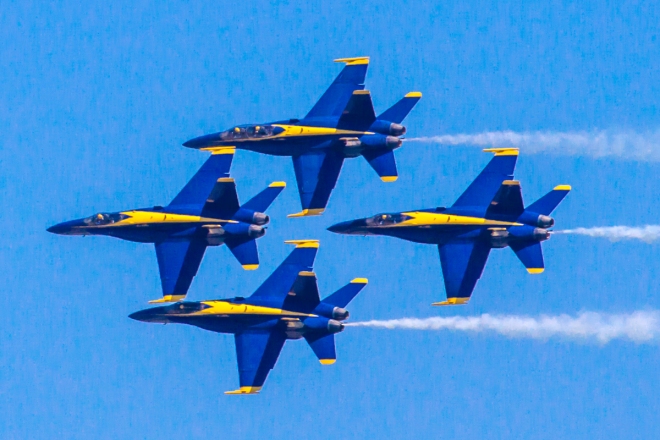 The Blue Angels practice in Pensacola 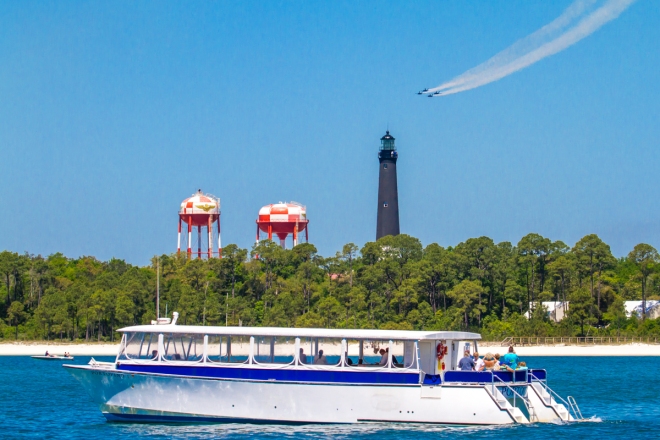 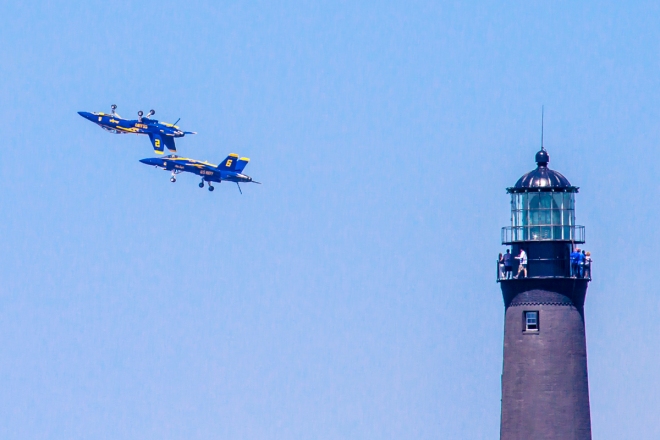 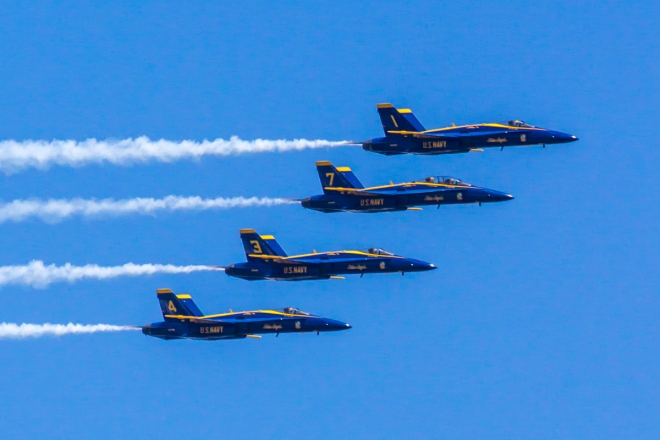 Beautiful waters and beaches in Pensacola

Leaving Pensacola, we were treated to a fantastic show by the Blue Angels as they practiced their skills at the Naval Air Station there.  We knew they would be flying at 11:30 AM, so John planned our ride perfectly; we arrived 5 minutes before the show began.  Being in a boat on the water provided an ideal viewing spot.  The jets swooped around and over us in perfect precision.  The Blue Angels never cease to amaze me; I couldn’t stop smiling as I shot hundreds of pictures that day. 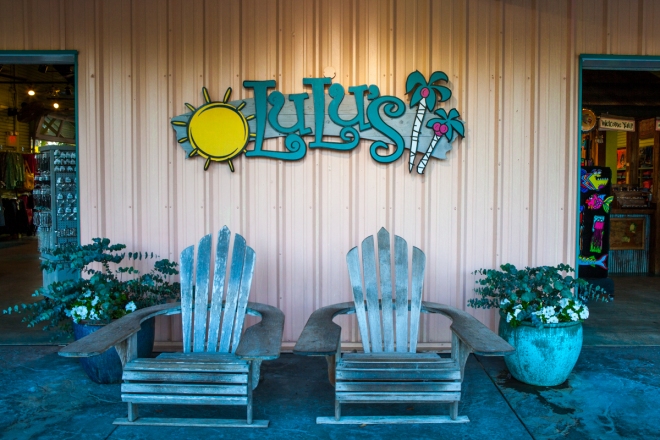 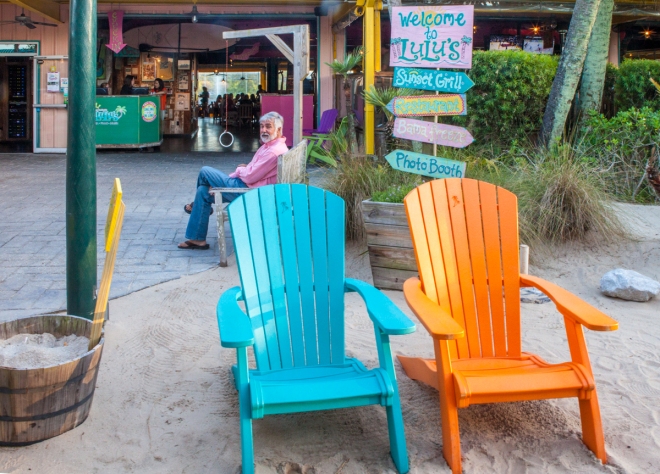 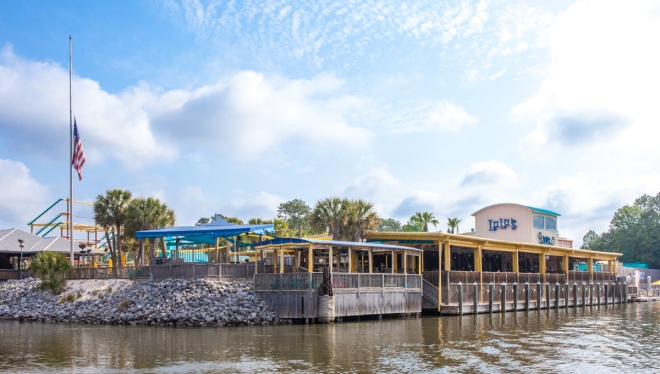 After the show we continued on our way, leaving Florida for the first time since December.  Now in Alabama, we chose to dock at Homeport Marina in Gulf Shores.  Homeport Marina is home to LuLu’s, a restaurant owned by Jimmy Buffet’s sister, Lucy. LuLu’s also has a ropes course for adults and one for children, an arcade, a shop, and a separate bar. Musical entertainment takes place in the restaurant most nights, and, yes, there were quite a few Buffet tunes being played.  We had lunch and dinner there and enjoyed both.

Our next couple of weeks will be spent at Dog River Marina in Mobile, Alabama.  Soon we will be traveling north on the Tombigbee River, but we have heard reports that heavy rain has made the river full of debris and not safe to travel right now.  We will remain at our dock on the Dog River and travel next week to our nephew’s wedding in Arkansas by car.  Hopefully, after our return to AfterMath, the flooding will have subsided and we will be able to go on our way.  If not, we will live by our motto, “We will figure it out”.  There are places to go and things to see, even if they do not follow our plan!