Montserrat. Every time I say the name of that island I can’t help but think of the Beach Boys song, Kokomo. “Martinique, that Montserrat mystique”; the lyrics run through my head. I really didn’t know much about Montserrat when we started our trip to the Caribbean, but I will say now that this mostly beautiful island has scars that show the effects of the fury of nature.

Most of the Caribbean islands are made up of mountains that arose from volcanic activity. The beautiful peaked mountains that are so lush and green are a result of the very fertile soil that is derived from the volcanic ash. Many volcanoes here have not erupted for a very long time, although some are considered potentially active. Dominica, itself, has nine potentially active ones. The most recent eruption, however, took place on Montserrat. In 1995, after being dormant for over 300 years, the Soufriere Hills volcano erupted and destroyed Montserrat’s capitol area. Two-thirds of the island’s population had to flee; most of the people moved to Great Britain. Today, the northern part of Montserrat is beautiful and green. Its coastline in the area is often compared to Ireland because of the beautiful cliffs. The southwest side, however, is devastated, buried under many feet of ash.

That is our friend Craig’s boat, La Sirena, anchored near us in Montserrat. 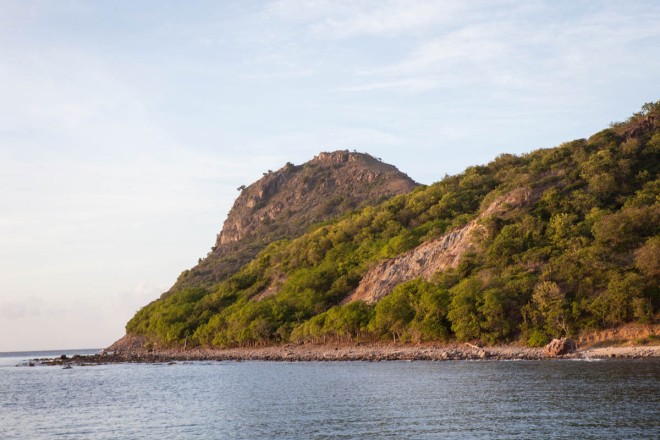 We left St. Kitts on June 5 and traveled to Montserrat. The anchorage at the town there was small and, although there were mooring balls, they were all taken by what seemed to be local boats. There was no place to anchor anywhere in town so we moved to a nearby anchorage that was actually inside a very beautiful park. A beach was at the bottom of a huge wall of cliffs, and it was a gorgeous place to spend the night.

The devastation caused by the volcano in 1995.  It still smokes and sends ash into the air.

Here you can see the ash and smoke in the air.  AfterMath had ash on the bow and cockpit after passing by.

We were not going to be able to have time ashore in Montserrat, so we left the following morning and started making our way south to Guadeloupe. I was anxious to try to see the volcano as we passed by. I had read that it still smokes and sends ash out, including over the water. There are exclusion zones where boats are not allowed, but we were able to be fairly near the coastline as we traveled south. At first we tried guessing which mountain was the volcano, as there are countless peaks and hills and we weren’t sure what our view would be. All of the sudden, though, we saw it. What had to have been rivers of lava, now gray ash, covered the valleys between the hills. Then we saw the devastation. Homes were buried right up to their roofs. Whole towns were empty. A church sat smothered in ash. Truly, there was nothing left. The volcano had destroyed everything.

A ray of sunshine broke through the clouds and smoke as if to say that there is always hope.

Someday, that ash will fertilize the land. Green trees will grow and the island will come back to life. But for now, part of Montserrat remains uninhabitable. It’s a sad sight to see.

Just a quick note: I will be posting a few shorter entries over the next few days in an effort to catch up! We have been moving along, but had very little Wi-Fi, so I have fallen behind.