Sometimes, when cruising, you find a place that is just tough to leave. Everything is just right. The docks are great, the people friendly, there are places to walk and places to sit, you can find restaurants nearby or close enough to dinghy to, there is a lot of local color, there might even be a dog park for a little guy to run and romp within walking distance. We found that kind of spot in Washington, NC.

We arrived in Washington on Monday, October 16th and planned to spend two nights at the free docks there. However, the weather was pretty cool and we thought we might need heat. As there is no electricity provided at the free docks, we instead called the marina and settled in. It didn’t take long until we discovered how wonderful Washington is.

Washington, NC is the first city named after George Washington in the United States. It lies 26 miles up the Pamlico River and is often called Little Washington to distinguish it from Washington, DC. In this city, many buildings date back to the Civil War. The river is an estuary, providing breeding grounds for countless fish and birds. The town has built a beautiful park along the waterfront that always seems to have people walking or jogging, and I have noticed that everyone that passes by says hello. Sit on a bench or a swing in the park and you will be joined by someone who just wants to chat a while. This is a friendly place for sure. 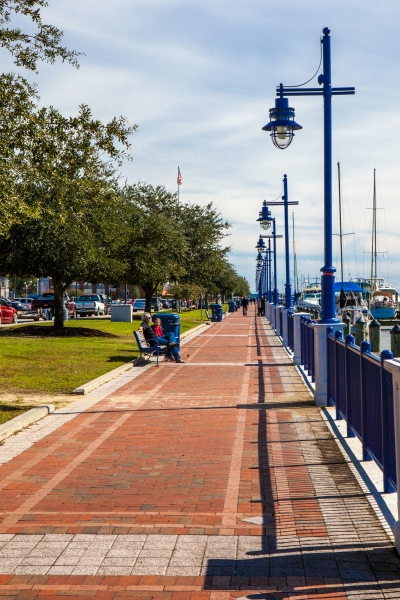 The waterfront here is bordered by a wonderful walkway. 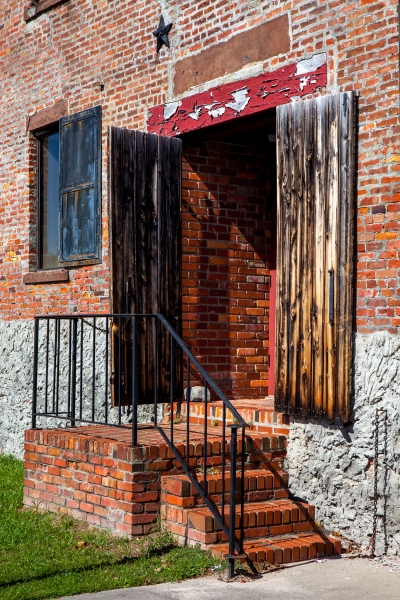 One of the many historic old buildings in town.

I spent plenty of time swinging on this swing. 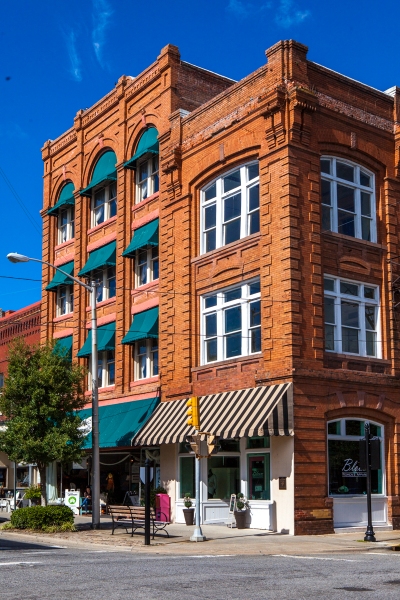 There were many of these lanes between buildings in the downtown area.

The Turnage was once a vaudeville theater.  It has now been restored and is used for shows, jam sessions, and art displays.

The old grist mill in town 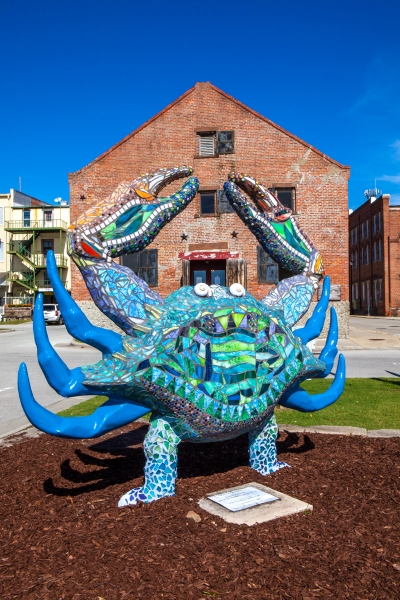 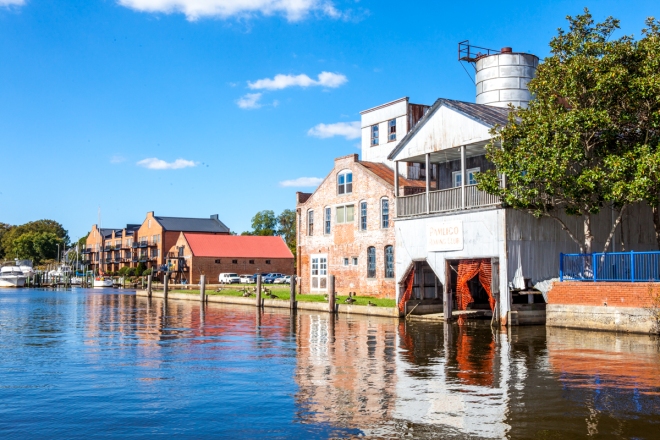 The front of the grist mill.  The building is now used for a rowing club.

The railroad bridge is usually open, but once a day or so a train goes through and the bridge tender walks out to this shack to close it. 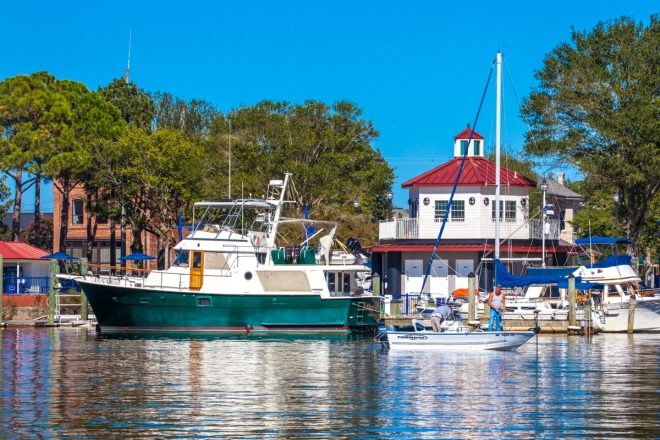 The light green boat in the foreground is Jimmy Buffett’s new boat.  It was built here in Washington and will be sent elsewhere to get its mast.  I love that AfterMath is in the same image as Jimmy Buffett’s boat.

Sunset from the docks

After arriving we were given a schedule of events for the area and we found that the weekend of October 20th and 21st was “Smoke On the Water”, a barbecue and chili competition as well as a fun festival for all. As it seems we often just miss events, and as we were already falling in love with Washington, we decided to extend our visit until Sunday the 22nd. This gave us time to walk around town and to visit the shops, to take the free boat ride offered by the “Estuarium”, a museum that explains the importance of an estuary, to see Jimmy Buffett’s new boat that is being built here, to attend a Blue Grass jam session in the historic theater, and to take Kirby to a dog park, all before the big weekend began. 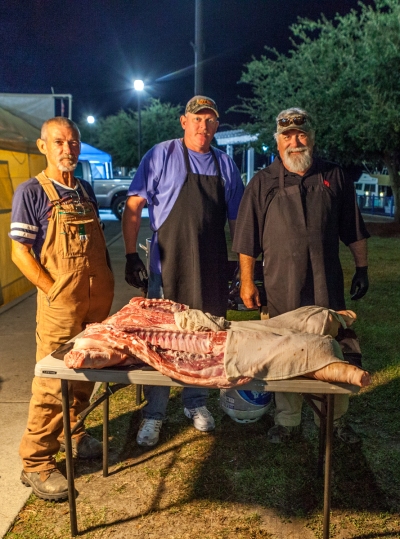 That’s Scott, David, and Clint of the Lazy Dayz team.  They were so much fun to talk to and so wonderful about explaining everything there was to know about barbecues. 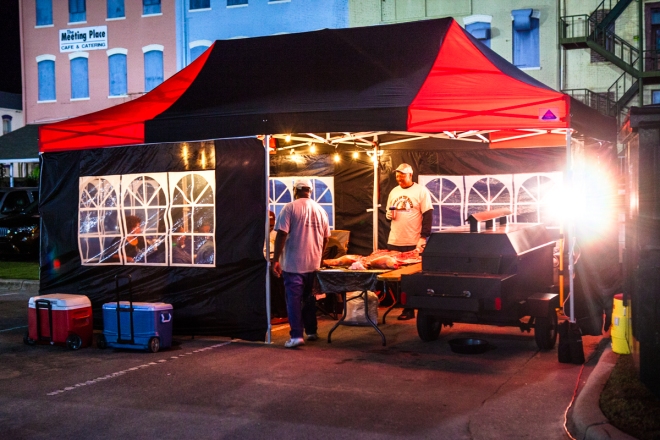 These guys were just having the best time ever.  You had to smile the whole time you talked to them. 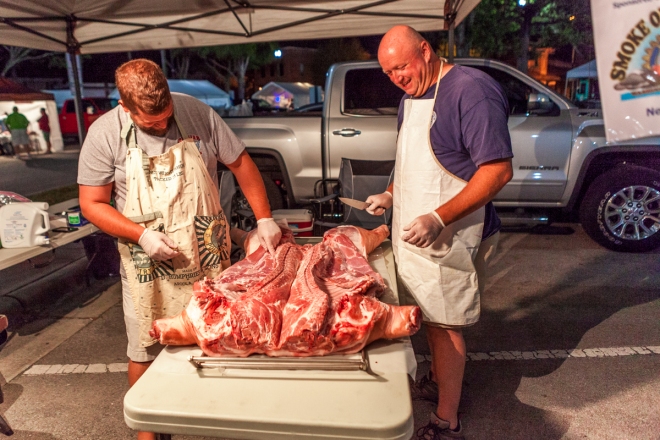 Friday the 19th arrived, and with it so did about 30 different barbecue trucks and trailers. They lined up and down the blocked off street right near the town docks and just a few steps from AfterMath. The day started out with everyone getting set up and readying their grills. At 9:00 PM the pigs were delivered to the participants and John and I decided to go take a look. While at first the sight of the carcasses was surprising, watching the men and women at work was fascinating. Everyone was willing to talk to us and to explain exactly what they were doing, whether or not they thought their pig was of good quality (only one woman was not impressed), and what the judges would be looking for. For example, if the pig had any hole in the carcass, one team explained that they would suture it up, the skin would “heal” during cooking and then the sutures would be removed before the judges saw the finished product. We learned there are propane grills and wood and/or charcoal cookers, and they would be judged separately. This was serious business to all of the teams, but they were all so nice taking the time to explain everything to us and to answer every one of our questions. The cooking began at about 11:00 PM and soon we could smell the aroma of barbecue on AfterMath. It was to continue all night. We were told that the propane grillers might be able to catch a couple hours of sleep, but the charcoal/wood grillers would have to stay up all night watching the smoker. 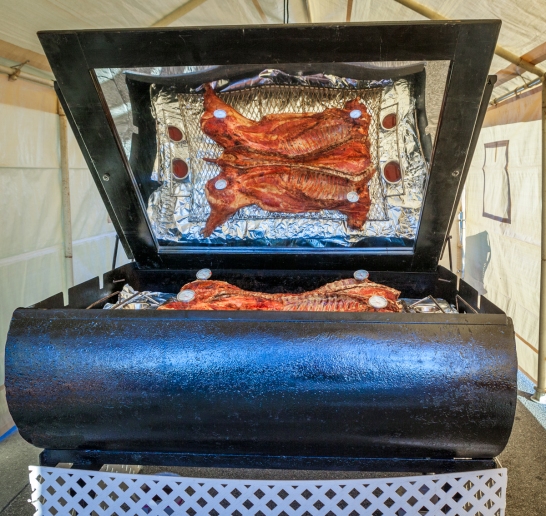 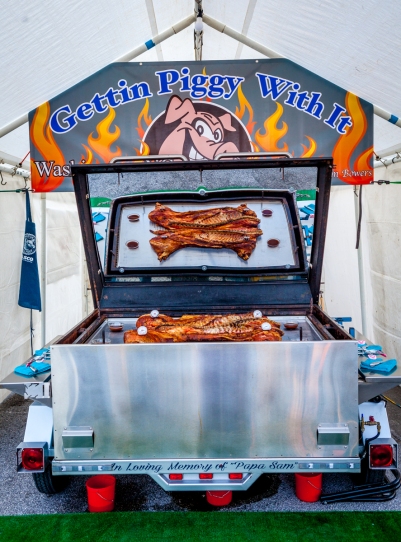 The first team to be judged. 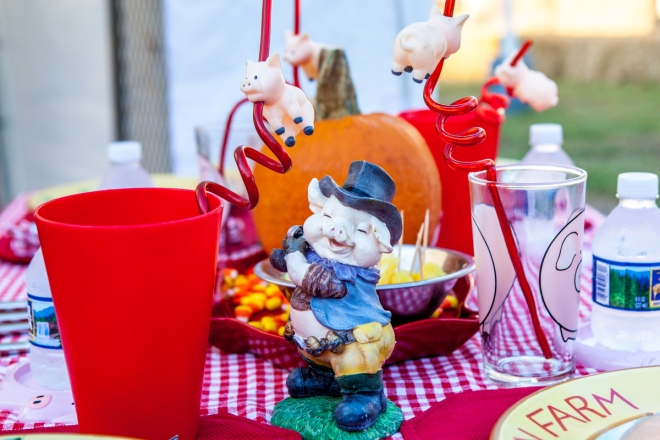 Some of the setups. 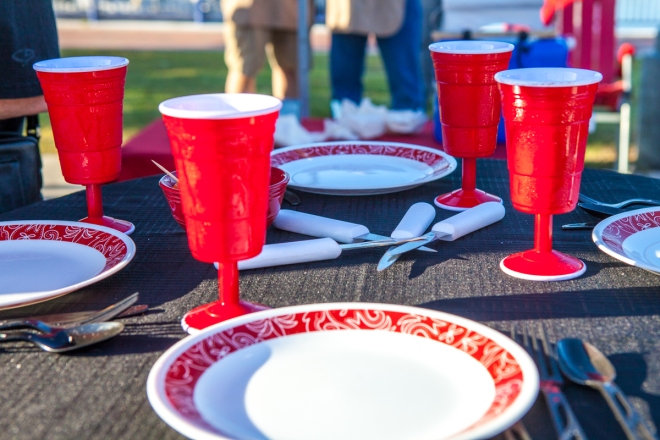 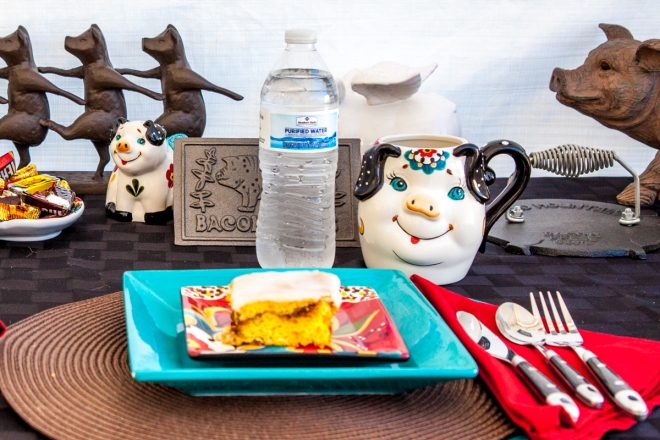 At 8:00 AM the judging was to begin. John and I both wanted to see the pigs on the grill before the judges got to them, so we headed up a couple of minutes early. We had spent quite a bit of time talking to one team, the Lazy Dayz, made up of David, Scott, and Clint, so we of course rushed over to see our new friends’ pig before the judges started. The grills were now spotless, four meat thermometers were placed in the pig so the judges could immediately see the cooked temperature, vinegar based sauce, traditional for Eastern North Carolina, was set out for dipping, and the participants were cleaned up and ready. Each tent was required to have four place settings of plates, napkins, and water available, and some took those requirements to the next step using cute dishes or mugs, and sometimes a fancy dessert on the plate for the judges to eat if they liked, or they placed a few candies or flowers around to make the area appealing and attractive.

The judges at the first tent.

That is some delicious meat!

190 degrees was considered the perfect temperature 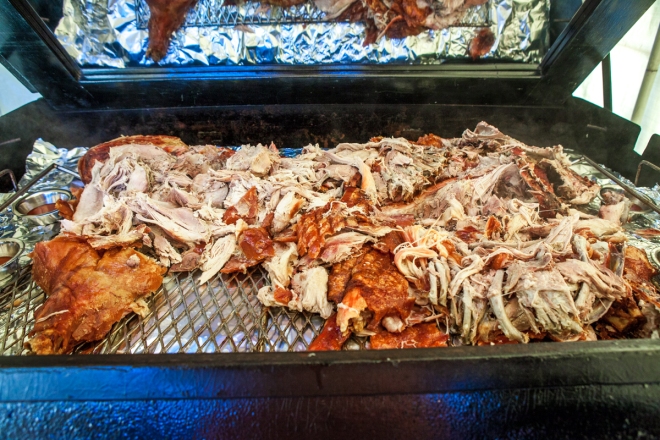 These guys asked if I wanted to take their picture.  Of course!! Willing subjects!

Soon a crowd of judges, all in bib aprons approached the first tent, complete with clipboards in their hands. In about three minutes, they checked both sides of each pig, tore it apart with their gloved hands, tasted the meat and the skin, dunked pieces in barbecue sauce and tried the meat again, had a quick discussion with each other, filled out their score sheets, and moved on to the next team. The great part was, the people watching the judges could sneak in and take a little sample of the meat and the skin too! Until then, neither John nor I had ever tasted pork so tender and delicious, and the skin was crispy, salty, and absolutely amazing.

The judges quickly started on the next pig and first made their way through all of the propane cooked ones. I usually hurried to the next tent before the judges got there so I could get a picture the pig before it was torn to pieces, but I did stay by the Lazy Dayz pig long enough to see that soon after the judges left each tent, a golf cart came by to pick up the meat and place it in a thermal cooler to keep it warm. Then, because this whole event is a fund raiser, all of the meat was taken to a central tent where it was shredded and combined together to be used to make pulled pork sandwiches and to be sold by the pound a little later in the day.

The judges at a charcoal cooked pig.  Notice how much darker the color is.

After completing the propane grills, the judges made their way to the charcoal/wood grills. Here the pigs were a darker color and, even though I was pretty sure there could be no better tasting meat than I had already tried, I proved myself wrong. These pigs were so delicious it was almost unbelievable. After trying two or three tastes there, I was full and had to stop, but it was such a fun experience and I was so happy we decided to stay for the event.

David, Scott, and Clint with their trophy.

Later in the day we made our way to the main tent and for $5 we were served a huge pulled pork sandwich and a soft drink. We were directed to the next table to put sauce and slaw on our meat, which, of course, we did. This was a real Eastern North Carolina barbecue, and it was great.  On our way back from lunch we found David, Scott, and Clint.  We were thrilled to hear they earned second place in the competition, but Clint told us that second place was, “First loser”!  They apparently lost first place by just 4 points out of about 1300 points total.  Still pretty good in our book!

More fun during the day. 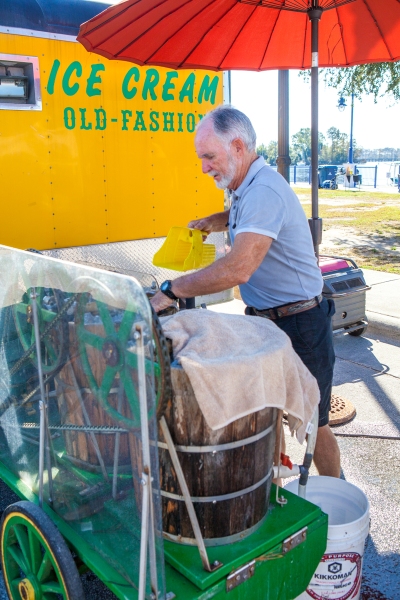 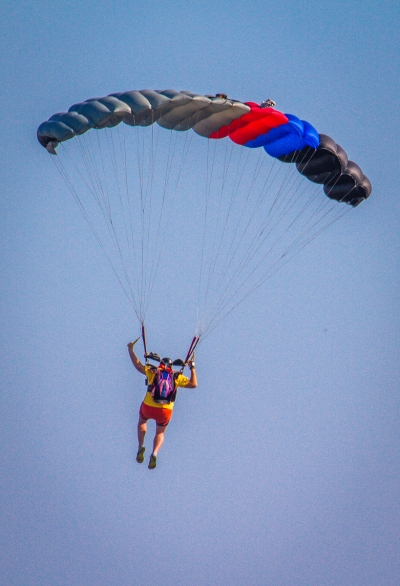 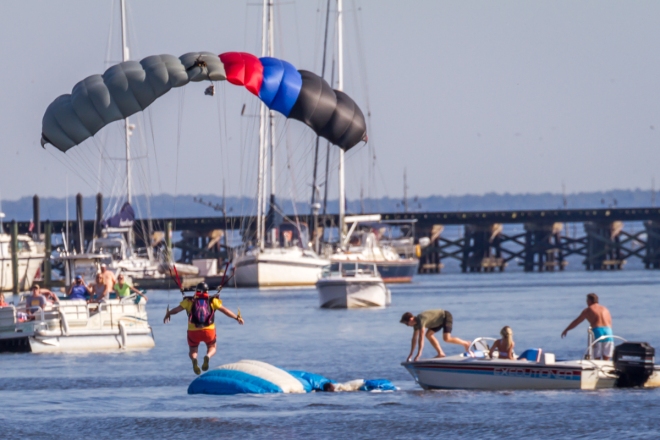 The day was not complete, though, at 3:00 there was a sky diving into the water demonstration, and during the day there were events for children, a car show, musicians playing, vendors selling fair type food and goods, and a fire engine pull where teams pulled a fire engine with a rope down the street. Later, around 5:00 we attended a cookout on our dock where one boater smoked salmon and pork and everyone brought a dish to share.

So, tomorrow, on Sunday the 22nd we will leave Washington, NC, the little town we expected to stay in for only two nights, but just couldn’t leave. We were told that this town was ranked as one of the “coolest towns in America” and we can see why. We met boaters who expected to stay here a few weeks or a few months and haven’t left yet. This is small town America at its best. No one seems to be in a rush, everyone has a kind word, well, maybe a lot of kind words! People stroll with their dogs, they swing in the big, welcoming white swings overlooking the water, they are always out putting out painted rocks in the park, they fish from the dock, they sit down to chat awhile even if they have never met you before, and they make everyone feel welcome. People seem happy and content and love living in this small town. We thank them for sharing their home with us and wish them good lives, peaceful days, and much happiness in this very cool town on North Carolina’s Inner Banks.   The lesson we take from a small place like this is to enjoy each day, find the simple pleasures, talk to someone new daily, and know that there is much to discover out there if you just look for it. And never let life pass you by.