Cruising might be defined as making a plan and then changing it; if so, our adventures fit the definition perfectly.  Leaving Bradenton, we looked at our choices.  We could go north to Clearwater Beach and do a direct, but overnight, trip to as far as Panama City, or we could take the route along the “Big Bend” of the panhandle of Florida and see some of the sights, thereby avoiding a dreaded overnight.  Of course, we planned to travel the Big Bend.  Again, ’the best laid plans of mice and men often go awry’.

We set out on our way north from Bradenton on March 23rd.  It was a nice day to travel to an anchorage near Clearwater Beach.  There, we settled in for the night, next to a beautiful golf course and with a lovely view of the skyline of the city.  Unfortunately, trouble started.  We have had chronic problems with our master head (toilet for the non-boating group), but we have always been just fine with the guest head. Until that night.  It just stopped working.  Now we had no working toilet.  For John, of course, the problem wasn’t too bad.  For me, I was issued an orange Home Depot bucket to use on the bow. The view on the bow was at least pretty at night!  Anyway, although the original plan was to go to the sponge docks in Tarpon Springs, the next day we made our way to Clearwater Beach Marina where the first and most important project was to get a head working.

Entering Clearwater Beach, we were joined by a couple of friendly manatees.

Next we were followed by pirates! 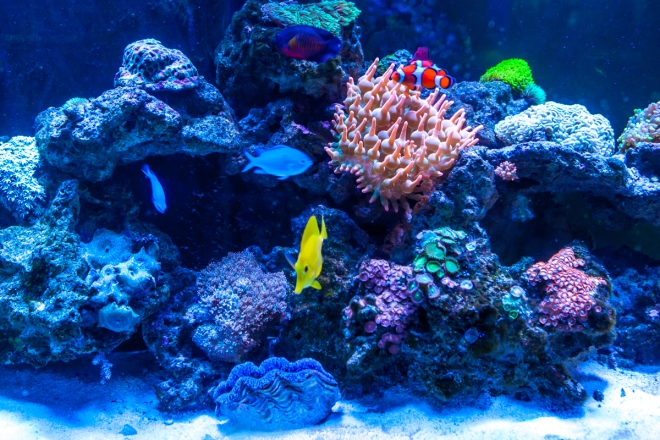 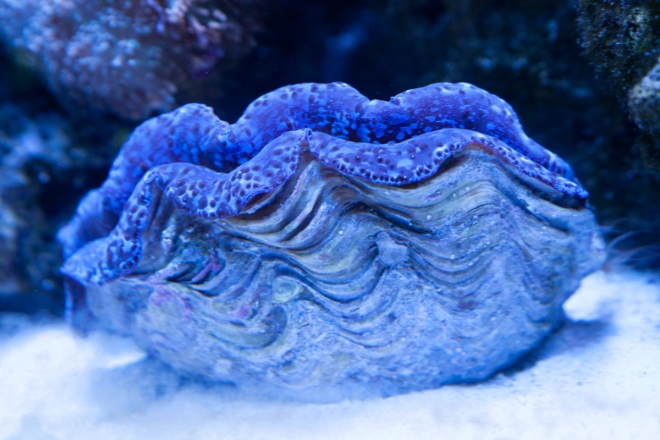 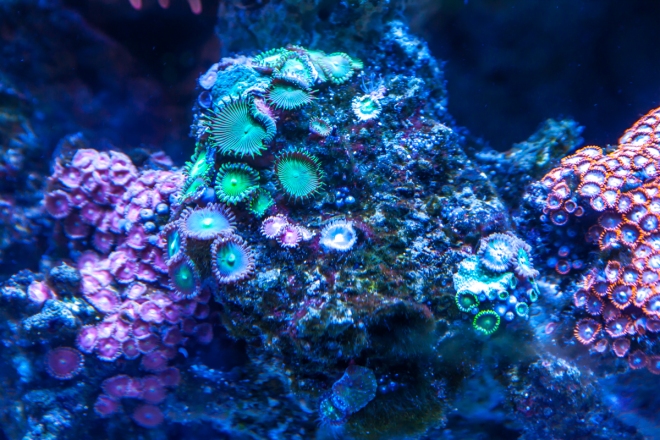 Thankfully, Clearwater Beach is fairly close to Jason and Lisa’s house, so we were able to spend time with them and with little Jace for a few days.  Jason was working the day after we arrived, but Lisa and Jace came to visit, and, although we had fun plans, Lisa and I spent lots of time driving around getting parts for John as he worked on our broken head.  The next day Jason was able to come with Lisa and Jace and, again John worked while the three of us toured the island and went for a great lunch at the Columbia Restaurant.  Finally, after giving Roto-Rooter a very expensive chance at clearing some lines, we called a local plumber who was able to add a new hose that fixed the head.  This allowed us to all be free and to take the ride with Jason to New Port Richey so we could see their house, allow Kirby a good run in their fenced in back yard with their dogs, and view their beautiful salt-water fish tanks.

This is Chuck Heron.  He has adopted the man who runs this bait shop and restaurant in Clearwater Beach.  He is a black crowned night heron.

Lots of boats take tourists fishing from the docks in Clearwater Beach.  Here is the crew of one boat cleaning their customers’ catches.

Clearwater Beach is so much more crowded than Anna Maria Island! 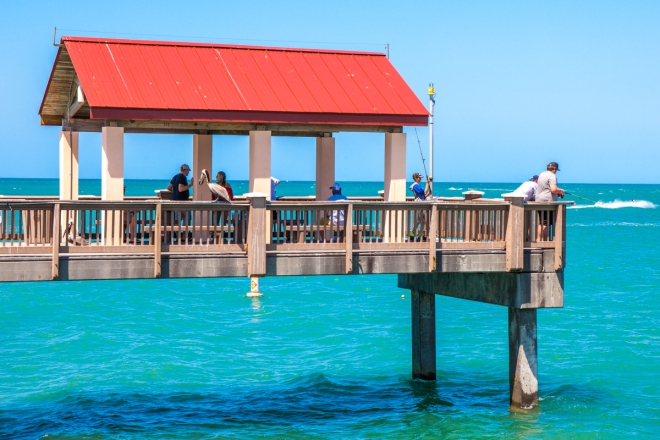 Fishing from the pier is a popular activity 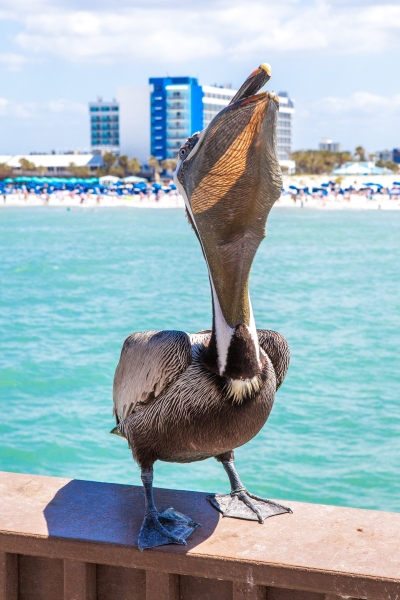 This guy was given a fish by a friendly tourist.

The beach view is almost obscured by umbrellas and tents.

Of course, there are always jet skis for rent.

Clearwater Beach was the most touristed place we have visited on AfterMath, and while we really enjoyed eating in nearby restaurants, seeing the beach, and especially spending time with the family, it was time to move along.  We found that our next plan, to visit Tarpon Springs’ sponge dock by boat, could not happen as no marinas that could fit our size had any dock space available for us.  Instead we moved from Clearwater Beach to the small island near Tarpon Springs, Anclote Key. 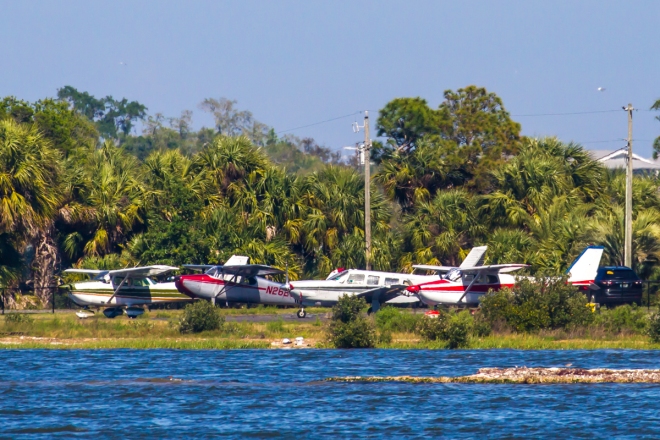 At the Cedar Key airport.

We left early the following morning and motored to Cedar Key, one of John’s favorite places. Cedar Key is a tiny island west of Gainesville that has never kept updated much with the times.  There are homes, a few hotels, a cute little downtown, and, John’s favorite, an airport landing strip with a taxi way that doubles as an entrance road to the airport when planes are not around; the airplanes have the right of way!  We have driven to Cedar Key, we flew in when we had the airplane and spent a New Year’s Eve there at a bed and breakfast with our friends, Ned and Anne, but we had never boated to it.  It was on John’s bucket list to take a boat there, and he can now cross that off his list.

The plan from Cedar Key was to leave early, then go to Steinhatchee, famous for its scallops, then leave the following day, and travel to St. Mark’s before heading to Carrabelle. However, when John laid out the plan, it turned out that Steinhatchee could not accommodate a boat our size and there was no suitable anchorage.  St. Mark’s was too far to go in a day and it turned out that anchoring or docking was also a problem for AfterMath.  Therefore, we decided to go directly to Carrabelle, 120 miles from Cedar Key. Because it was a 21-hour trip and we always need to depart in daylight and arrive at a destination in daylight, we now had to do the dreaded overnight after all.  It was a beautiful night with a nearly full moon, the seas were calm, and there was no boat traffic on the radar, it was as good as an overnight can be. I still hate it; I just don’t do well without a regular sleep schedule and without being able so see anything out the windshield.  Overnights mean relying on instruments only. 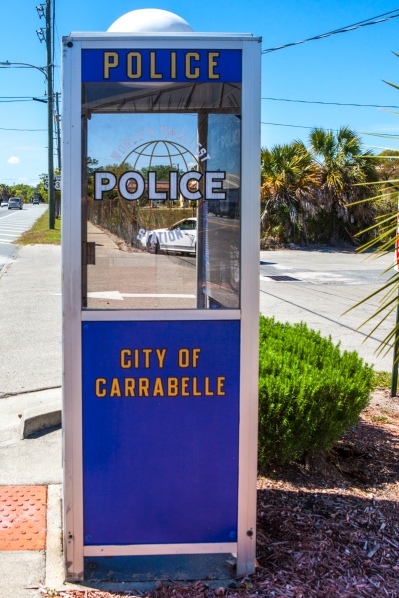 Arrival in Carrabelle was not without its drama.  As we arrived in the marina we snagged a line on our starboard prop, which promptly stalled the engine.  Docking with one engine is a challenge, but John did a great job.  Unfortunately, we then had to call a diver to come to the boat the next morning to remove the line from the prop shaft, which required over an hour of effort.  Carrabelle is a tiny town without much to brag about except that it has the world’s smallest police station, a phone booth.

Apalachicola from the water. 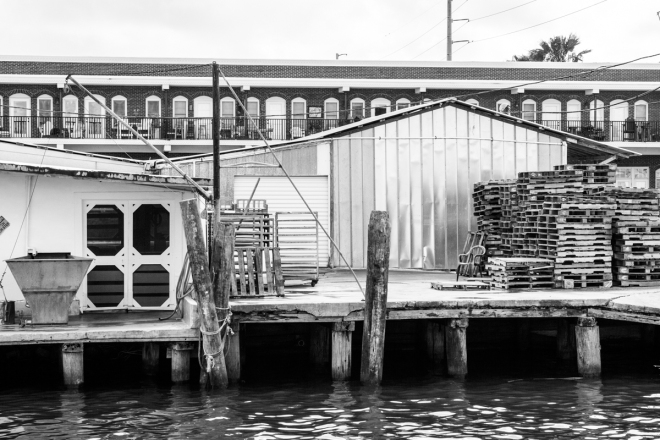 The old shrimp docks, still in use.

These houseboats are VRBO rentals. 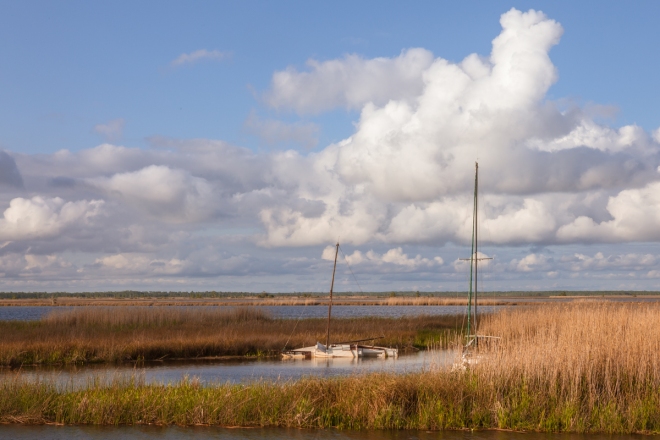 The view from the fly bridge of AfterMath at dock.

This shrimper agreed to let me take his picture. 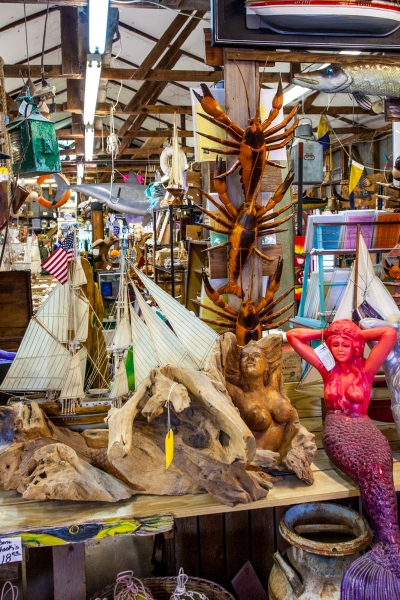 In and around a shop. 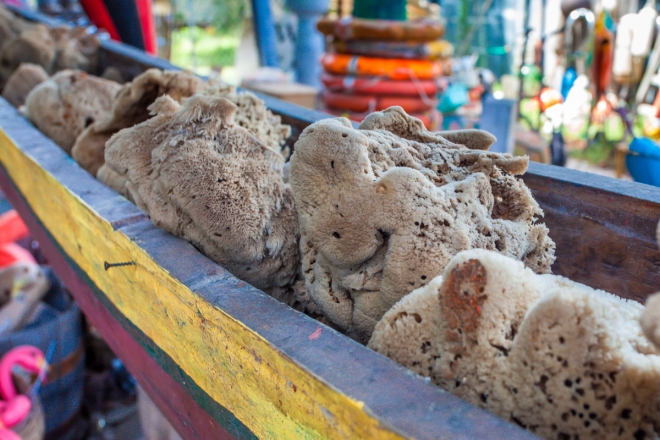 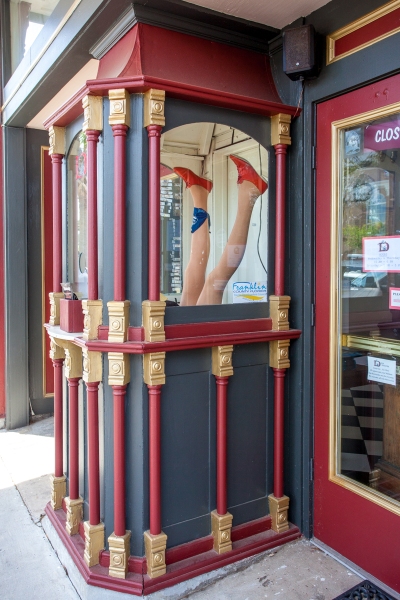 At the theater box office. 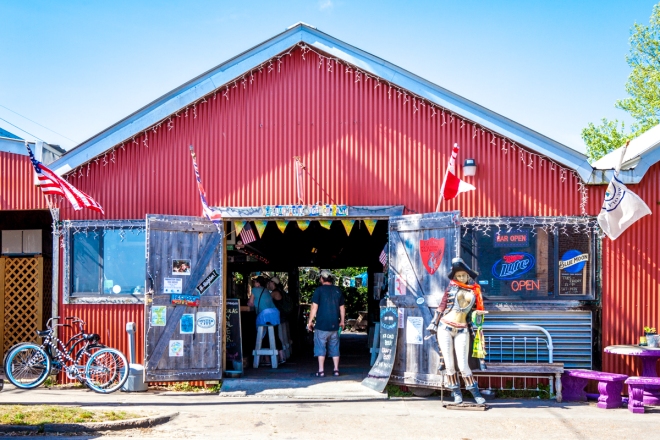 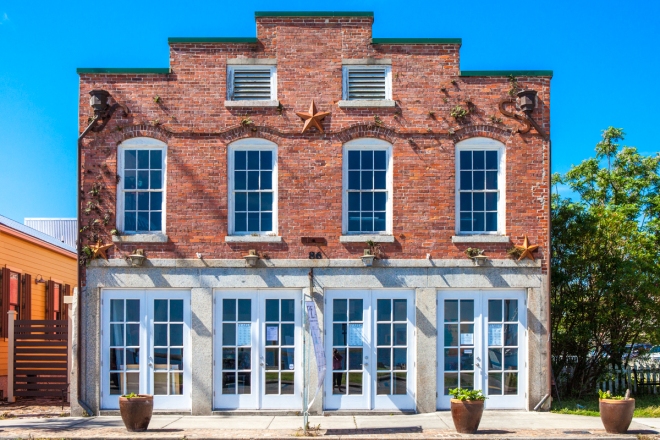 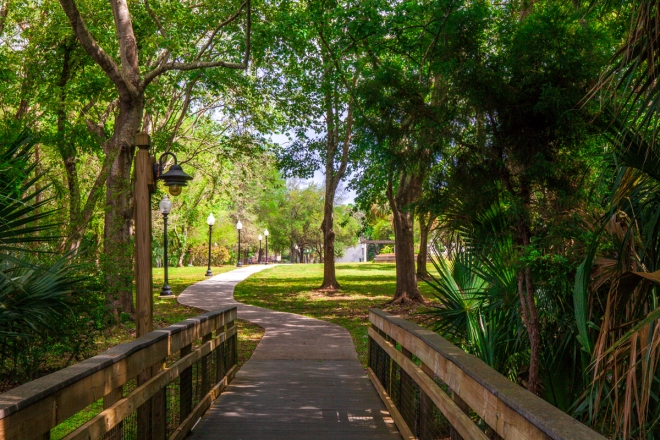 A small botanical garden across the street from the marina.

The Roman House, a state park near the marina.

The ride from Carrabelle to Apalachicola through the St. George sound was pleasant despite storms that had been predicted, but that we some how managed to avoid.  Once at our dock at Scipio Marine, we thought we might spend one night there, but ended up spending four.  We ate scallops, shrimp, and oysters, and watched endless shrimp boats travel up and down the creek where we were docked.  We also walked around the town, poked through the shops, and even surprisingly and unexpectedly met up with David and Di, more extended family that lives in Tallahassee.

So, we continue our ever-changing life on the waterways.  Soon we will be traveling in the rivers and the canals in the center of the United States. Wherever we go we meet new people, find new towns, and live new experiences.  We have learned to be flexible and to take life one day at a time as no one is ever sure what tomorrow will bring.  No matter what, though, we are enjoying our time aboard AfterMath, and we know this is an adventure of a lifetime.