We were all ready to leave early Friday the 19th. The boat was ready Thursday; I went up to Kelly and Craig’s house to say a tearful goodbye to Craig and the kids and then went to the vet clinic to say another tough goodbye to Kelly, who was working. John purposely did not want to witness the scenes and planned to call and give a quick, “see you soon”. It was all very sad. But back at the boat, I mentioned to John that the little ones, Carter in particular, really wanted to take another boat ride but he and Michaela had school on Friday and Craig was working all night Thursday. John immediately picked up the phone and called Kelly to tell her that we would put the departure off one more day. This way we could leave Saturday and everyone could go along for the ride. Needless to say, the people at Lambs were quite surprised to still see AfterMath at the dock when then arrived, but they understood and were happy to let us stay one more day. 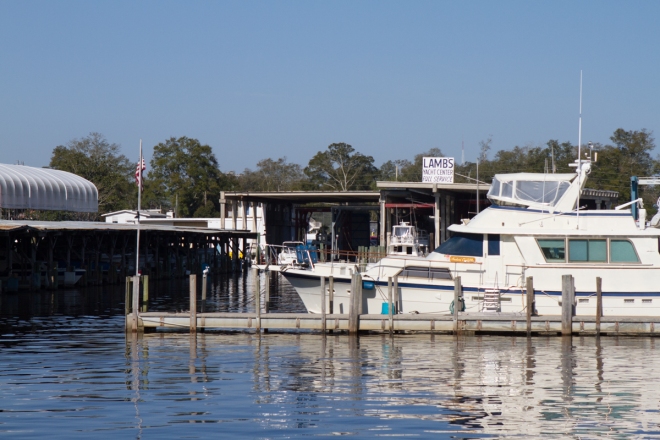 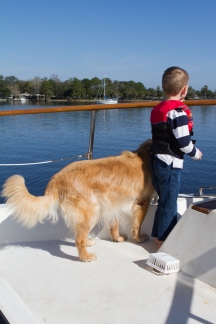 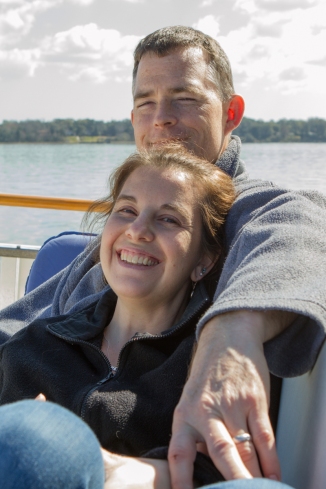 Some views of the fun!

Past the Jacksonville Landings again. 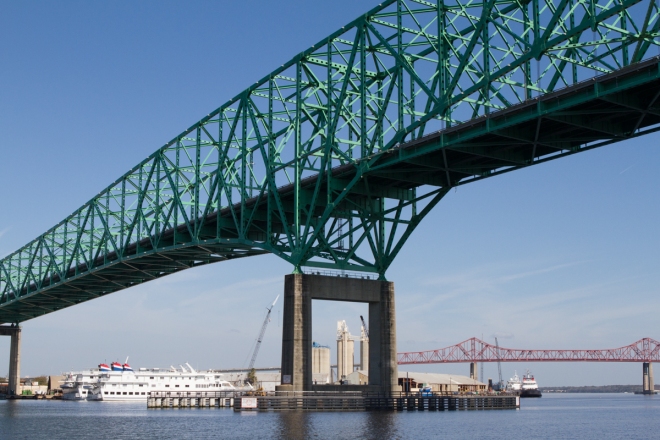 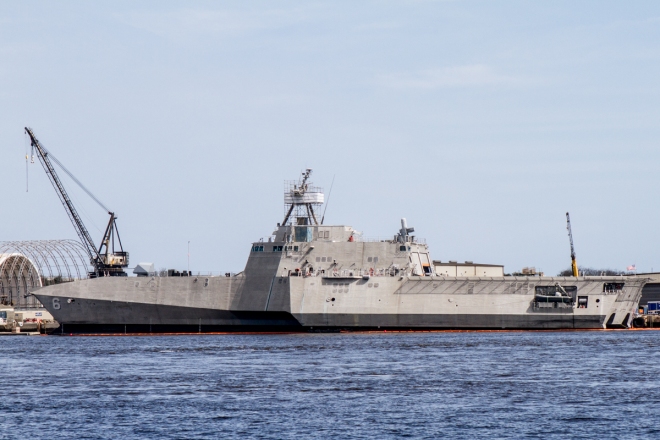 Saturday turned out to be a gorgeous day. There wasn’t a ripple on the water and it was warm and sunny. Everyone boarded the boat bright and early and we headed north on the St. John’s River, through the city, under bridges, past the zoo, and through scenery that was very familiar to the kids from land. We arrived at Sister’s Creek, a city owned free dock in a lovely natural setting, where Kelly and Craig had left a car early that morning. Michaela and Carter stayed with us as they wanted to play at the playground at the park, and Kelly and Craig drove back to Lambs to pick up the other car. Craig brought a sleeping Madison home while Kelly came back to get the other two. All in all, it felt so much better to say goodbye after a wonderful day that was enjoyed by everyone. It was still sad, but at least it felt complete. 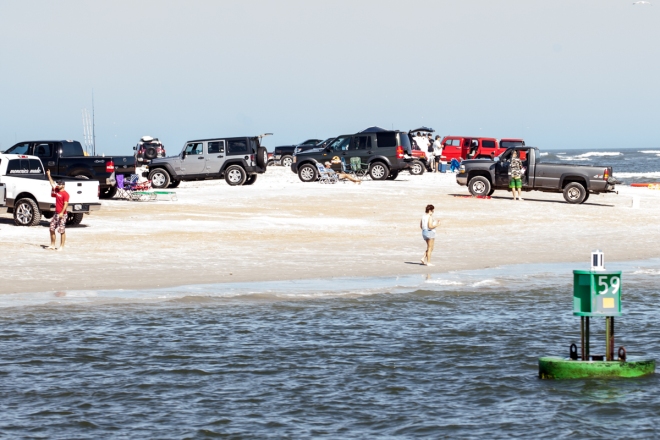 St. Augustine Inlet from the Atlantic

The fort in St. Augustine

The lighthouse at St. Augustine 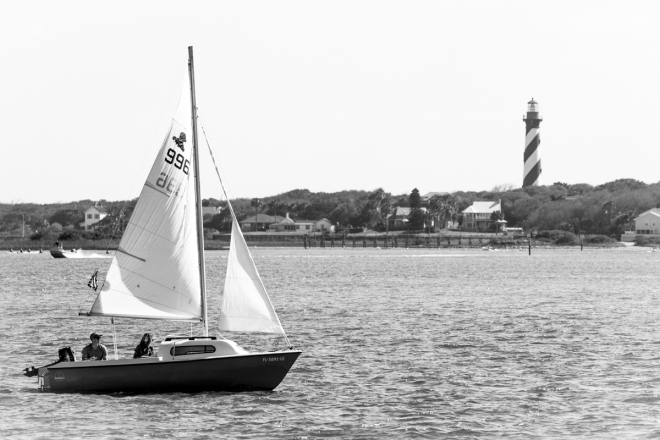 Passing through the Bridge of Lions. 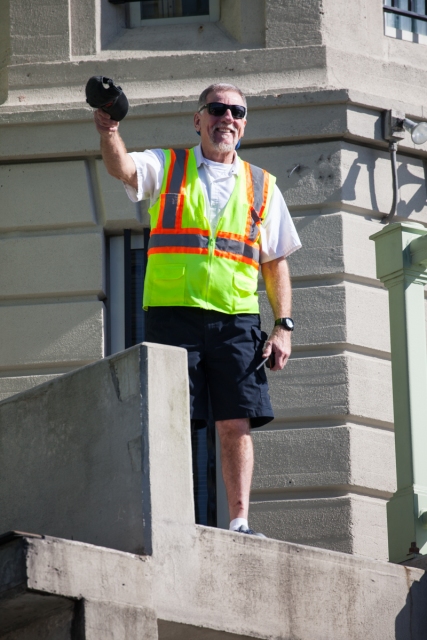 The friendly bridgetender from up on his tower 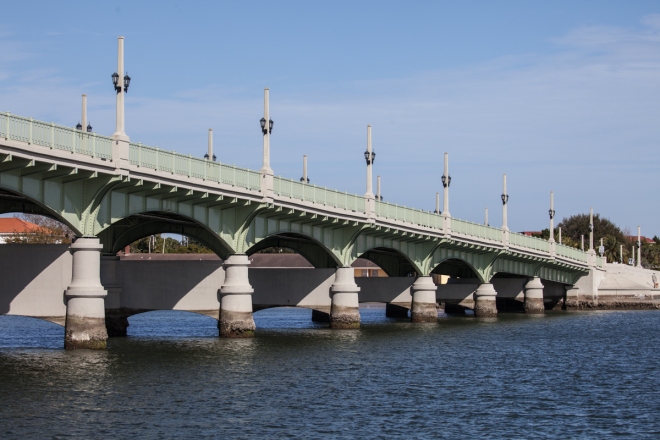 The pirate ship I went on with Kelly and the kids a year or so ago.

The next morning we left early and headed to St. Augustine. We stayed at an old marina outside of the city because our main mission there was to fill the boat with enough fuel to get us all the way to Trinidad. The prices for diesel were very inexpensive at a fuel dock there, and the dockhands were friendly and helpful, but in order to get filled, we had to tie up to a shrimp boat and have the hose stretched over its docks to reach us. It was an interesting experience!

Monday, February 23rd, we moved further south to Marineland, Fl. Marineland has a lovely marina that is directly across the street from Marineland Dolphin Adventures. Originally named Marine Studios, the dolphin-loving park was the host for several movies, including “Benji Takes a Dive”. It is now operated as a subsidiary of the Georgia Aquarium and is used for educational programs. The University of Florida has facilities there to use for research as well. Marineland, the town has a permanent population of somewhere between 5 and 16 people, and is one of the tiniest towns in Florida. It was incorporated in the 1930’s to put the name of the studios on the map so anyone in the world could find it. 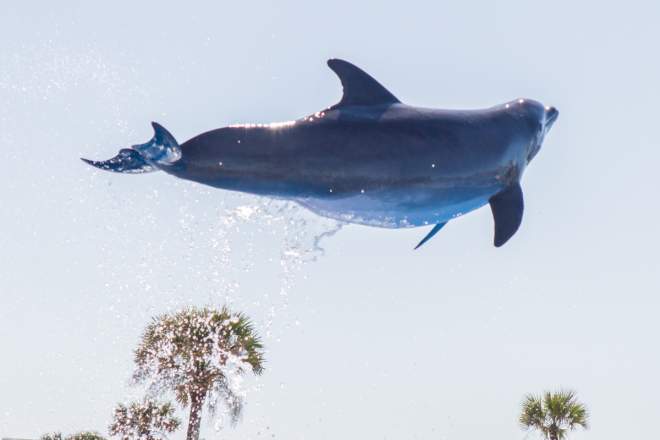 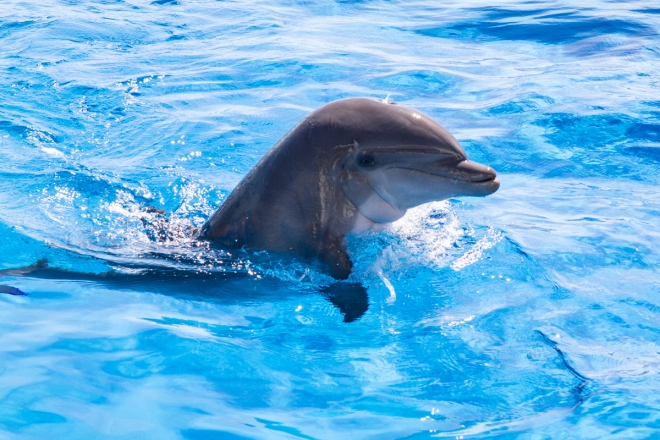 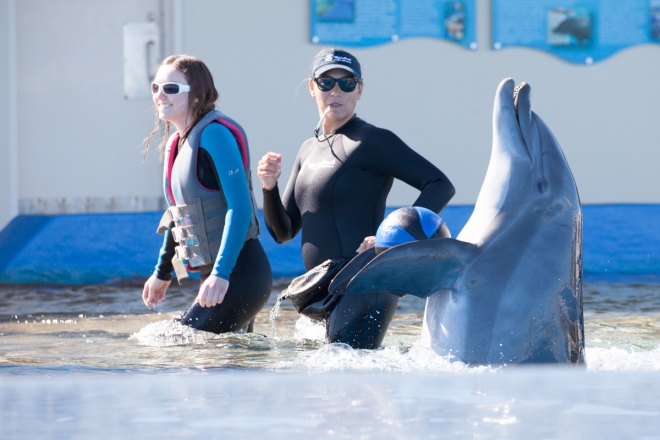 Dolphins are just too cute!

The beautiful tanks for the dolphins with the beach in the distance. 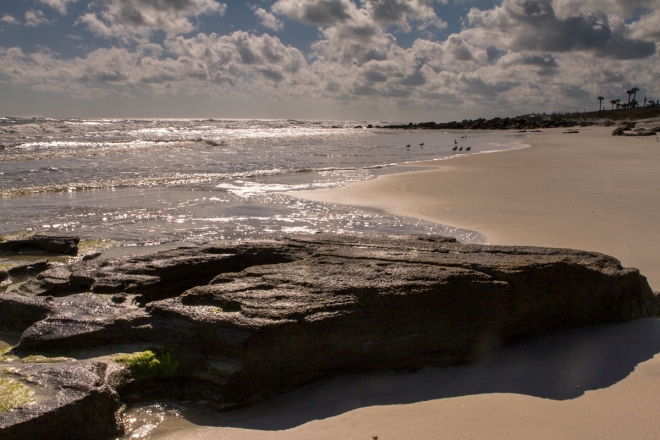 The beautiful beach in Marineland, FL 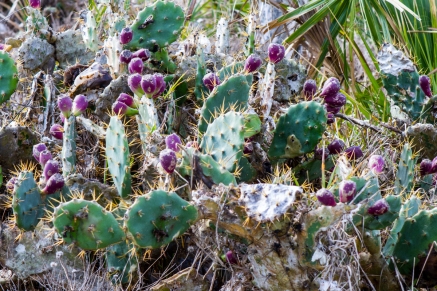 A little of the plant life on the way back from the beach.

We had a great stay at Marineland. We knew some heavy winds were coming in so we planned to remain in place for a few nights, and before we knew it, six nights had passed. The marina gave us free passes to the Dolphin Adventure park and we spent a few hours there enjoying a tour and watching people participate in programs in which they fed dolphins or swam with them in the very large tanks. Also across from the marina, which was immediately off of the Intracoastal Waterway (ICW), was a beautiful beach on the Atlantic Ocean. Dogs were allowed on the beach, so Kirby and Jake had a great time frolicking in the waves and digging in the sand. To add to the appeal, there was a gorgeous preserve with trails at the marina where Kirby and I took a long walk one afternoon. 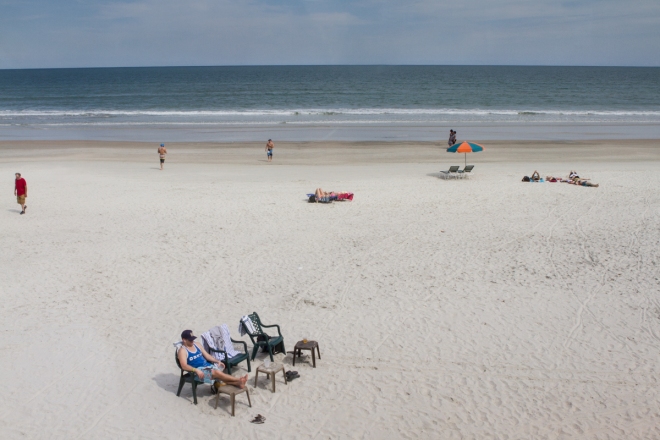 Finally, on Sunday, we left Marineland and headed to Daytona Beach. The city marina there was huge compared to the tiny one we had just left, but we were excited to be going to Daytona as Jason and Lisa were coming to see us on Monday. They arrived in time for us to have a nice lunch on the beach before heading to a marine surplus store and West Marine. Jason and Lisa just bought a boat so they had as much fun shopping as we did and everyone found something to buy between the two stores. After a sightseeing ride around the area we came back to the boat and Lisa gave me a much-needed haircut before they had to leave and make their way back to New Port Richey. It was a short visit, and I even forgot to get their picture, but we really loved having them come across the state to see us.

After Daytona Beach we were ready to head to Titusville where we picked up a mooring last night, and then today we made our way down the ICW to Serenity Island, just south of Melbourne, where we are anchored for the night. Our plans now are to head to Miami before making the crossing to Bimini. In the meantime, we are busy making sure we have all the forms needed for us and for the dogs as we enter the Bahamas. We have all the vet forms and tests, thanks to Kelly, who took very good care of Kirby and Jake at her clinic. We also discovered that we need to have a U. S. Customs Permit for our boat, which we applied for just a day or two ago. There are immigration forms for the Bahamas for us as well. Recently we found that we need a permit to take the dogs into the Turks and Caicos as well as an international health form that we will have to get when we are in the Bahamas! Over the next few days I am going to be adding a page to the blog that summarizes all of the steps we are taking for permits as we go into each country. I haven’t found one site yet that has given me all the information, so perhaps it will be useful for others who are making this trip.

As we travel along the ICW we love to look at the scenery. It is varied and often a study in contrasts. There are natural islands across the river from huge hotel and condo complexes, brand new huge homes, old trailer and RV parks, and everything in between. It is fascinating viewing! Here are a few pictures of what we have seen over the past several days.

Ahhh, the days of sailing when we would send the kids up the mast because they didn’t mind!! 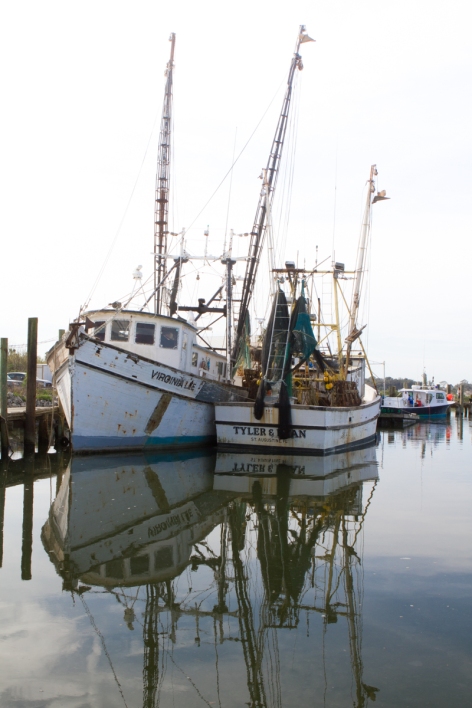 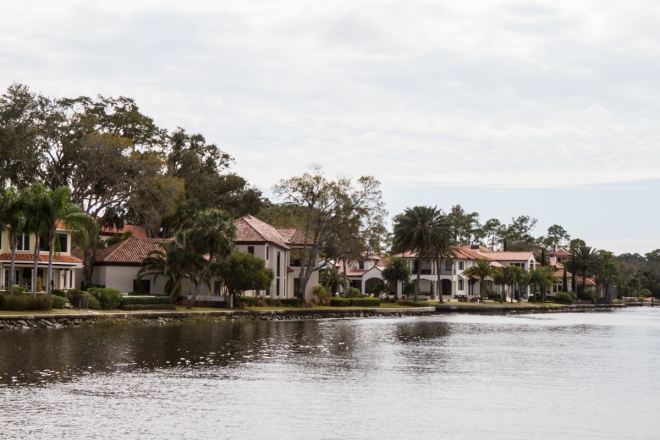 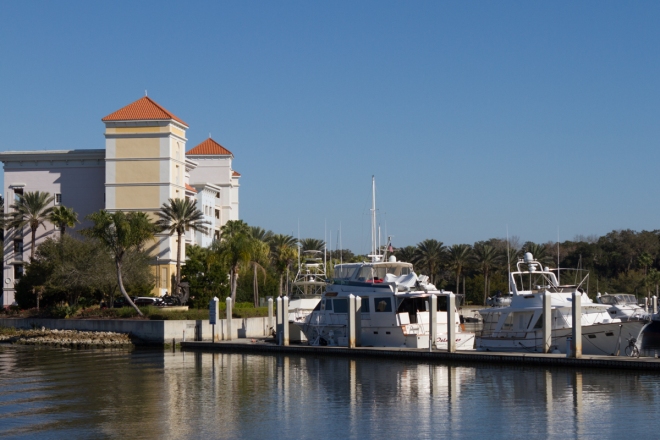 There were so many dolphins around yesterday.  I didn’t even realize I had caught one on camera!

Wish I could see more of what this says – note that it says there is a video on youtube! 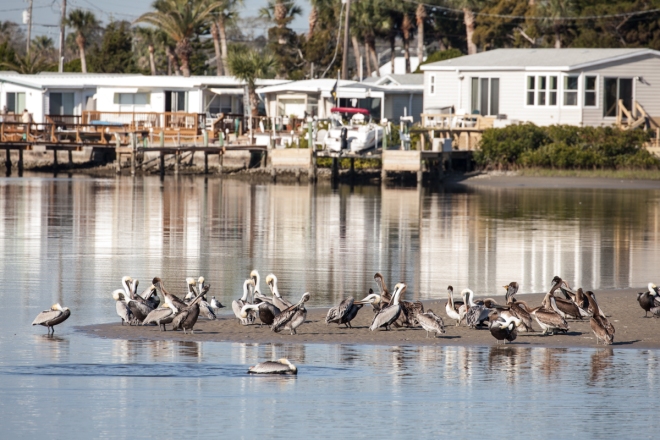 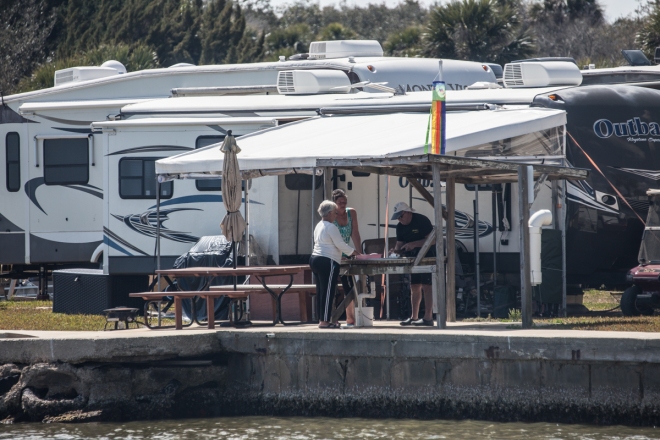 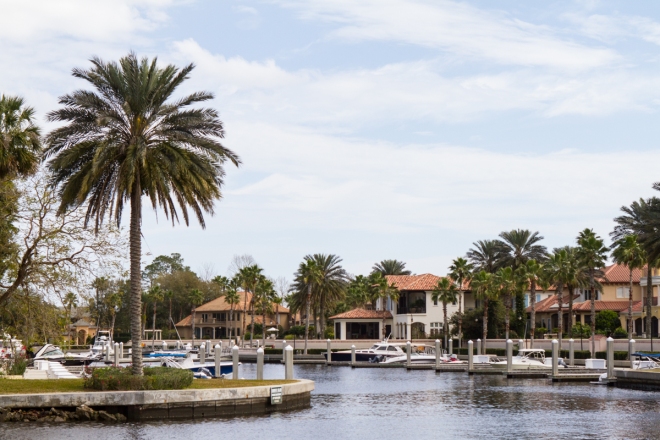 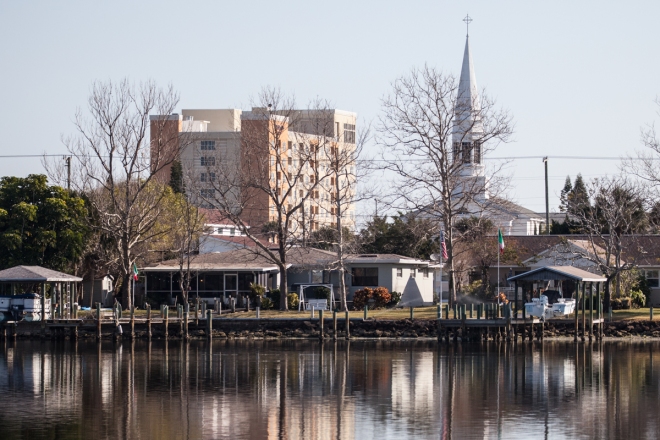 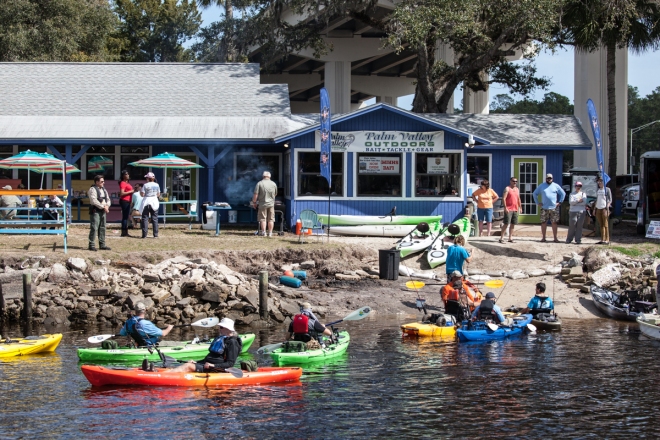 In the meantime, this is where we are today!