Look around your house.  Look in every room, every closet, every cabinet and every drawer.  Suppose you had to reduce everything you owned into a 5’x8’x4.5′ space.  What would you keep?  What would you get rid of?  What can you not part with, but also know you can’t take?  This has been our life for the past three weeks.

First, as you know, we ran ads on the neighborhood site and on Craigslist which took care of most of our furniture.  Then John made a run to Jacksonville to Kelly’s house to drop off an antique dresser, an antique china cabinet, a couch and our grandfather’s clock along with some pictures and a couple other small items.  Jason and Lisa took our living room couch and chair and the entertainment center and TV.  Finally we were making progress.  Gone were two cars, an airplane and a boat.  There in lies the hardest part of the transition so far.  We had two boats!  Both sold sight unseen quickly.  One to a person from Canada and another to someone from New York.  The problem was, we didn’t have the proper trailer for the one going to New York but our Canandian buyer thought he could use it.  It turned out that he could not, so our final ties were still lasting.

Our story for the last few days has had it’s ups and downs, but here is how it has been going.

On Monday our Canadian buyer was supposed to come and sea trial our 18 foot Boston Whaler.  Unfortunately, the lift we needed to move it from our canal to the salt water was broken so his sea trial was put off until Thursday.  When we took him out, he found it wasn’t quite as fast as he expected, so the deal was off.  That meant that we needed to figure out what to do with the boat before Friday’s closing on the house.  Thankfully, we had wonderful neighbors who were more than willing to let us move our boat to their dock.

Friday came and went well.  We put the final shine on the house and went to the closing.  I know Charles and Cahla will feel welcome on Spinnaker Dr.  They are such a nice couple and we are so happy that they were excited to move into our house.

After the closing we spent the next two nights with Susan and Dick Busby while trying to figure out what do with the Whaler as well as spending some serious time repacking the 5x8x4.5 foot trailer.  Thankfully, John is a great packer and all that was left behind were two folding chairs.  At this point, the trailer is in the airplane hangar.  This was a real blessing as we are not trailing it behind everwhere we go. 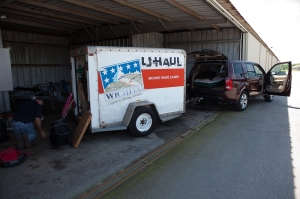 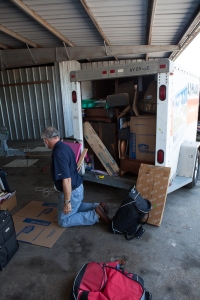 Next stop was St. Petersburg where we spent two more nights with our friends Ned and Anne. After figuring out that we could leave the boat at a brokerage in Venice, John and I went back to Bradenton to put the boat on a trailer and ready it for the transfer.  However, all good plans seem to have a glitch, and the boat did not fit on the trailer we bought for it!  Back to the drawing board.  John sold the trailer to Carl, the Canandian buyer of the 11 foot Whaler and then called a friend who wholesales boats in St. Pete.  And so, tonight, because Ned and Anne had more company coming it, we decided to take a night in a hotel and we will finally be able to finish with the Whaler tomorrow and head to Jacksonville to visit with Kelly and family.  The dogs have been at Rocky’s since Thursday, where they have boarded everytime we have been away for the past 10 years.  With nothing left in the house and so many places to be these last few days we thought they would be more comfortable. We will pick them up, give them baths and start the trek north finally!  Of course, we did hear about snow up there last week, so slowing down the trip a little seemed ok!

One thought on “Goodbye Spinnaker Drive”