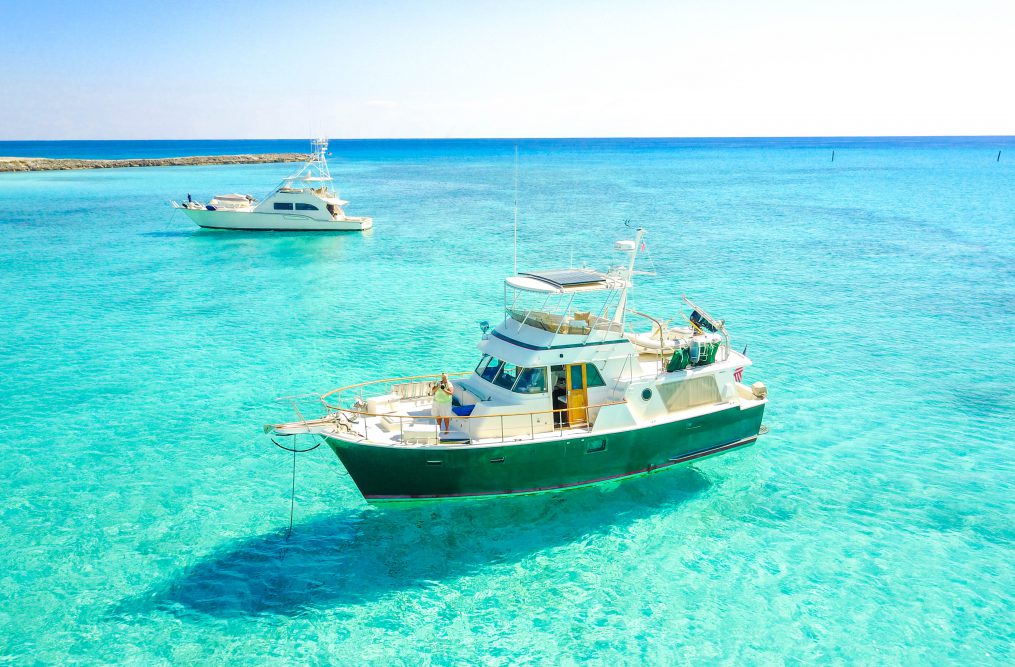 It’s a long way from Cambridge, MD to Jacksonville, FL when you travel at six or seven knots. Jacksonville is our next long stop. There we will spend time with Kelly and family and have more work done on AfterMath before we leave for the Bahamas and then the Caribbean. While we would have loved to have more time cruising in the Chesapeake Bay, we know that we need to get to a warmer climate as soon as possible. If anything were to happen to the boat, we don’t want to end up in a cool weather climate where we could get stuck for the winter. We are a little behind the crowd that makes its way south each year, but the time we spent with Jeff and family, as well as the installation of the electronics, the new floor, and other work now complete, was so worthwhile. 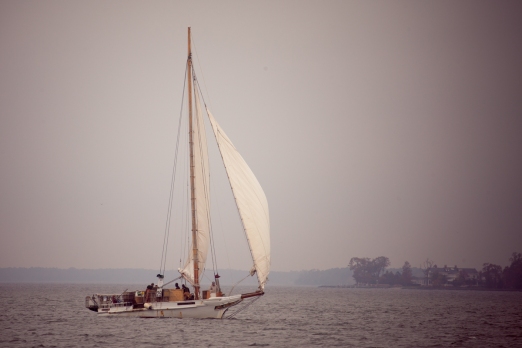 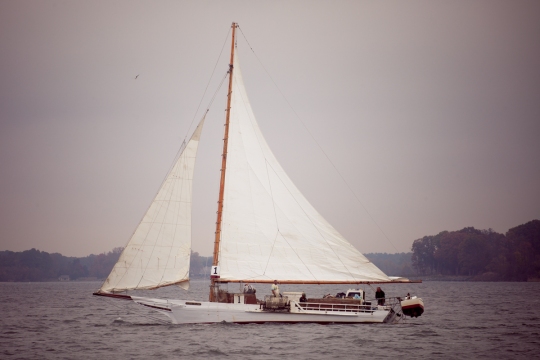 Obviously the pelican population is thriving in Virginia.

We pulled out of Cambridge around 8:00 in the morning on Friday, November 6th, after taking a minute to say goodbye to the men who were so much a part of our daily lives during our time at Mid-Shore Electronics. We then crossed the Chesapeake Bay and made our way to Solomons Island where we anchored for the night. It was a bumpy ride so I really didn’t take many pictures, but I did manage to photograph a couple of skipjacks oystering on the bay. They are a beautiful sight and, now that I have learned so much more about them, I was thrilled to see them under sail dredging for their oysters.

The last remaining smokestack in Reedville

The processing plant at night

Saturday, we anchored in Reedville. While we never went to shore, we found it was an interesting place to be. The first sight we saw was a fleet of large blue ships that had two other large fishing vessels on the back. I quickly went to Google to find out what they were. It turns out that they are boats that fish for menhaden, better known, to those of us who cruised Long Island Sound, as bunker. The blue boat takes the two others out as a transport ship. The smaller boats stretch a net between them and scoop out huge quantities of these fish. They are taken back to the processing plant where they are largely used to make Omega 3 supplements. It seems that this is a rather controversial topic in the area as some people think menhaden is over harvested and, as a result, populations of birds and other fish that feed on them are compromised. All I can think of is those years in Connecticut when there were so many bunker in the water that my kids would snag fish as fast as they could pull them in. They then used them for bait for blue fish, another fish that seemed overabundant to us. Some years there would be so many fish in the water that they would end up dying off and floating all over Black Rock Harbor where we kept our sailboat, Solitude. It was not a pretty sight and I have a true aversion to that particular species of fish! Menhaden fishing in Virginia is limited now, but at one point there were lots of processing plants in Reedville. Each had it’s own smokestack. The only one left now is the one pictured here, and it has been made into a monument of the town’s past.

The next two days on the Bay were days of wind, rain, and waves. Kirby was very nervous and spent all of both days travel time huddled up in his crate. Jake didn’t like it either; he prefers to be outside, but it was too wet so we kept him in. He settled down, but it was difficult for him for a few hours. As for me, thankfully I had scopolamine patches on board to prevent seasickness. John was fine, which was a blessing, as he wasn’t getting any help from me. I learned that the shorter the wave period, the more uncomfortable the ride. Normally a period of eight seconds is acceptable, but yesterday those three and four foot waves had a period of only three seconds and I felt tossed and turned by the time we anchored.

While we are usually trying to travel about 40 miles each day, we motored less than 30 Sunday to Deltaville, mostly due to the uncomfortable wave conditions. We stayed in a peaceful anchorage along with only one other boat.   Monday we got up early and made it to a huge anchorage at the entrance to the Elizabeth River. There we were in front of the Norfolk Naval air station where a lot of action was taking place. A security boat was keeping an eye on us while helicopters were doing training runs; it seemed their low circles were directly around the boat much of the time. I questioned John over and over to make sure we were in a legal anchorage. Also, on the VHF radio, there were almost constant calls from Naval war ships reporting their plans to be leaving for sea. It was a little unsettling, as besides the Navy surrounding us, the winds picked up strongly, leaving us swinging around the anchor. All was well, though, and yesterday morning we headed up the Elizabeth River for Norfolk.

A Naval warship heading out to sea 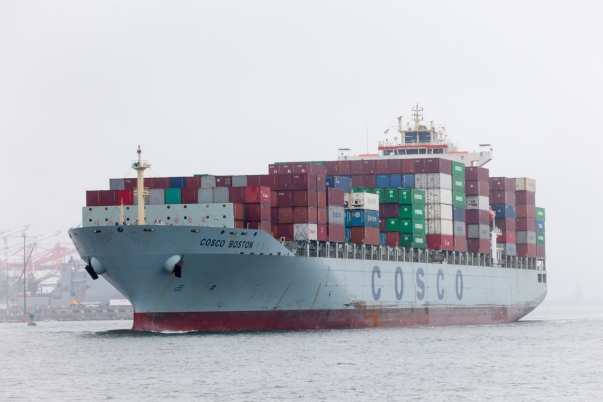 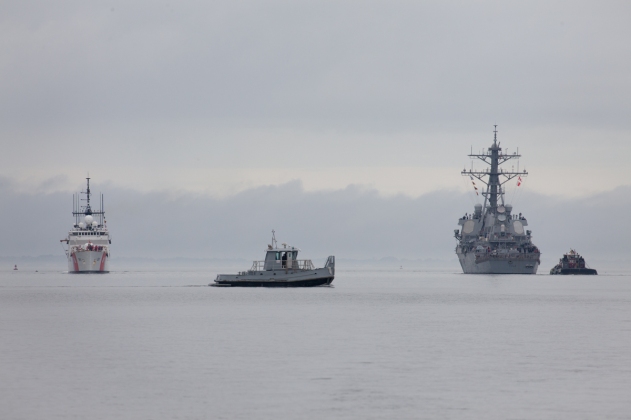 Note the Coastie ship on the left 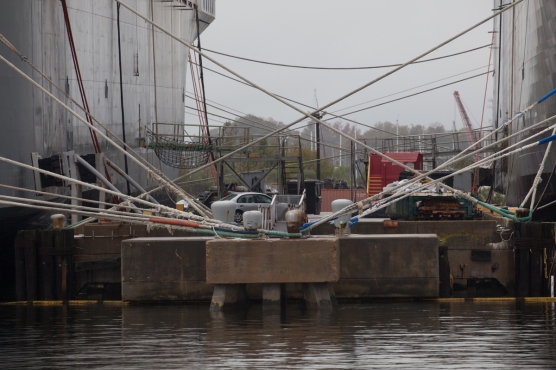 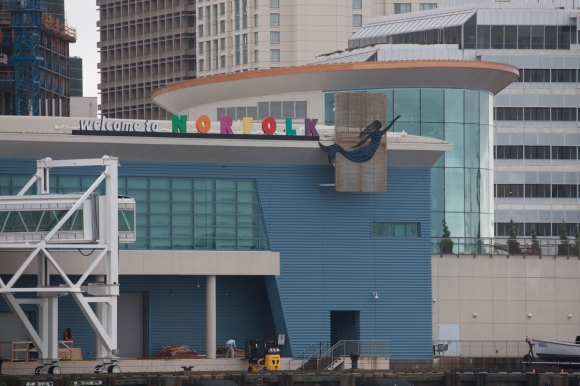 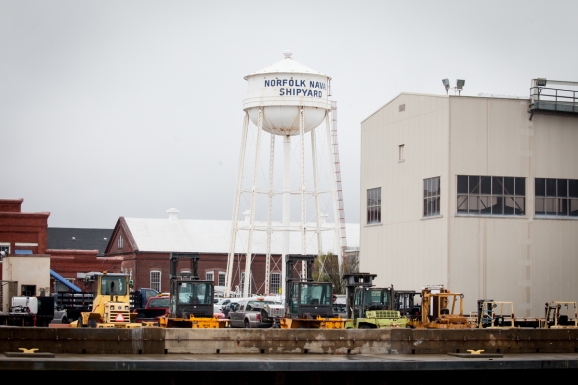 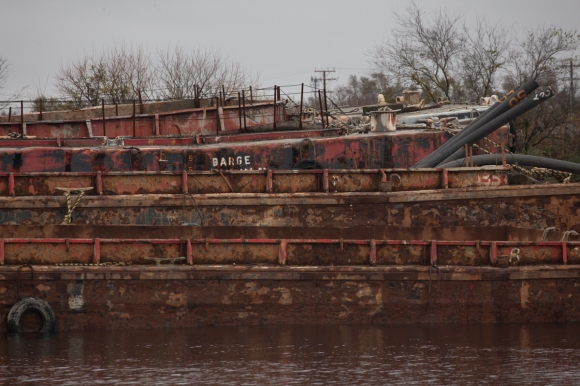 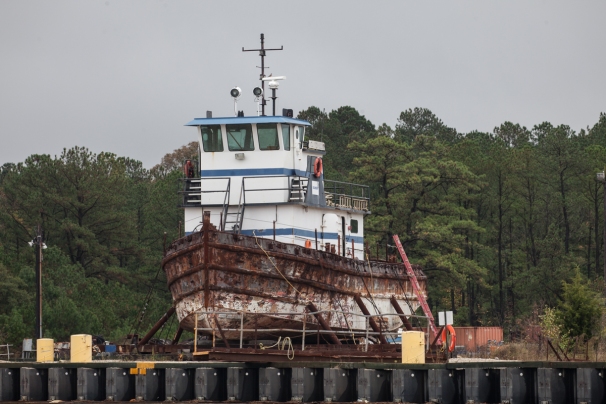 Norfolk is the actual Mile 0, or beginning, of the Intracoastal Waterway. It is also a boat and ship lovers delight. There are more kinds watercrafts in this area than you can possibly imagine. We have been through Norfolk a few other times by boat, but each time I have been fascinated by the huge military ships, the colorful container ships, the monstrous cranes loading and off-loading boats, and the brightly painted tugboats pushing barges. Yesterday was dreary and foggy, but Norfolk was not a disappointment. To make it even more interesting, we saw some of the Navy war ships heading out to sea with their crew lined up on the stern.

The entrance to the Dismal Swamp

Construction on a bridge

Almost immediately after leaving Norfolk, the Intracoastal becomes serene. As we traveled, we passed the entrance for the Great Dismal Swamp, which is one of my favorite places on the waterway. We were not able to “do the Dismal” this time as we wanted to get fuel in Chesapeake, VA and the swamp would have taken us out of the way from what probably is the cheapest diesel fuel on the Intracoastal. We bought 500 gallons at $1.93 a gallon and would have bought more, but we are keeping the boat as light as possible until we get to Jacksonville. The waterway is known for its shallow depths and we want AfterMath to float as high as she can until we get to deeper water. With four fuel tanks aboard, we can move fuel around so that the stern will sit high and the bow low. We do the same with our three water tanks to further enhance the draft of the boat. This worked very well when we cruised the Rideau Canal in Canada which has a controlling depth of 5’0”. Aftermath has a draft of 4’9” but with the above approach we never once ran aground (yet). 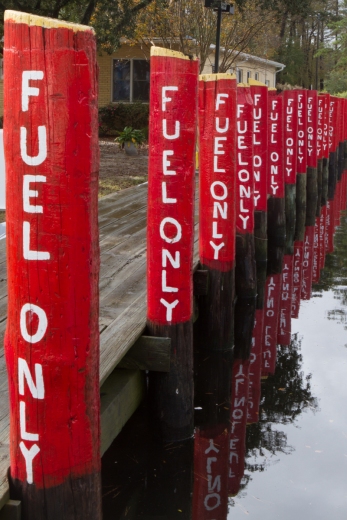 Do you think they really mean it?

On our way to the marina where we bought diesel fuel, and stayed for the night, we encountered a lock. I remembered doing locks before this trip and I always was a bit terrified of them, but after the number we traversed over the summer, this tiny one-foot lift lock was as easy as could be!  We have now transited 219 locks since June.

A Veterans’ Day Celebration in Coinjock 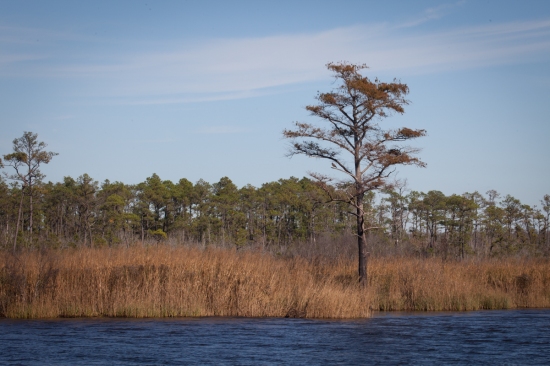 Today we entered North Carolina and are now anchored in the North River just south of Coinjock, NC. When we get close to the South Carolina border we have plans to visit with our good friends, the Redins and the Kirks. Then soon after will be our Thanksgiving visit with Jason and Lisa. It is so hard to believe it is almost the holiday season again and equally hard to believe that we have now lived on AfterMath for almost seven months. Time goes so quickly. Remember to live every day to its fullest as we never know what tomorrow might bring.

As promised, here are pictures of the new helm chair. 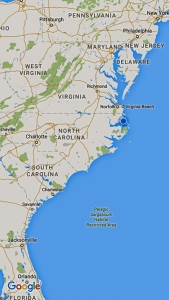