The transition had to be made eventually, but it was hard for us to leave Canada knowing that we would not be back again for at least a couple of years. We were leaving a country that we learned to love after discovering the friendly people, the interesting history, the beautiful towns, and wonderful cities. And, it just didn’t seem right to be leaving before I ever caught a fish! But we had to prepare to leave, so we took the last several days to tour the Canadian side of the 1000 Islands. 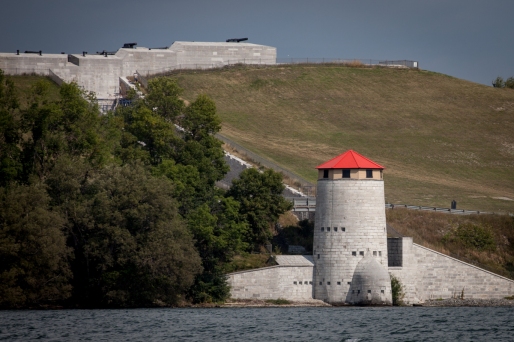 Kingston powers 72,000 homes with its 86 windmills

Shortly after leaving Kingston we were greeted by Shrek and some friends.

We stayed an extra day in Kingston as the wind on the 24th was strong again and the general consensus of boaters was that it just wasn’t a good day to leave shore. Not ones to miss enjoying our day, we went to town where we ate gelato for lunch at the waters edge park. We then walked around the city and found a great little butcher shop where some provisions for the freezer were purchased. The next day was much calmer so we started out on our way to an anchorage.

On the way from the Admiralty Islands to the Lake Fleet Islands, we saw this large Canadian police boat.

After anchoring, this boat, which was based on the big red ship above, came up to us to make sure we had checked in with the border patrol in Canada (which we had done 2 1/2 months earlier).  They were the Royal Canadian Mounted Police and they couldn’t have been nicer.They even happily agreed to this photo. 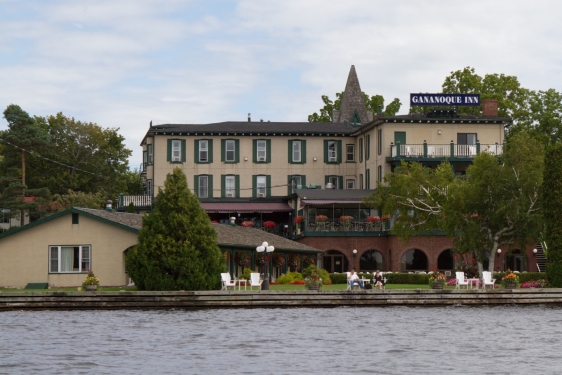 A few scenes from Gananoque (pronounced GAN-a-NOC-way).  It took us a few days to be able to say it correctly! 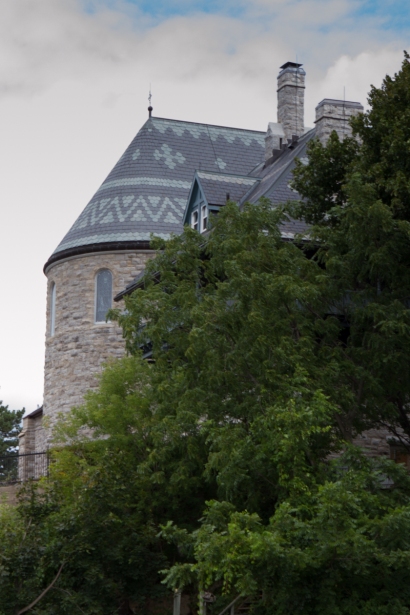 A peaceful sunset at anchor.

The skies changed constantly and were very beautiful. 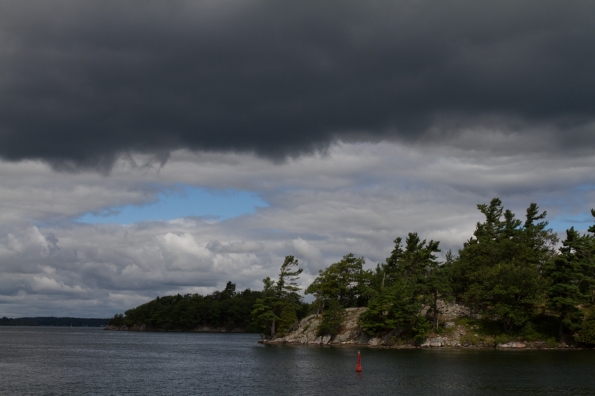 Even with that threatening looking sky above us, we barely felt a drizzle that day. 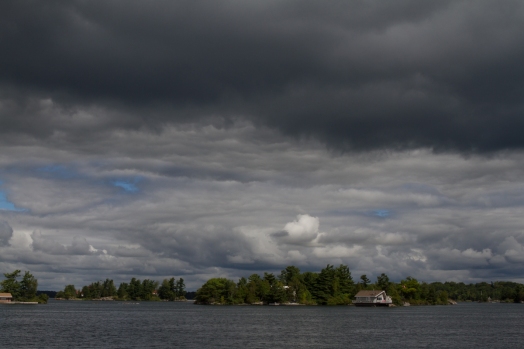 Passing under the 1000 Island Bridge on the Canadian Side. 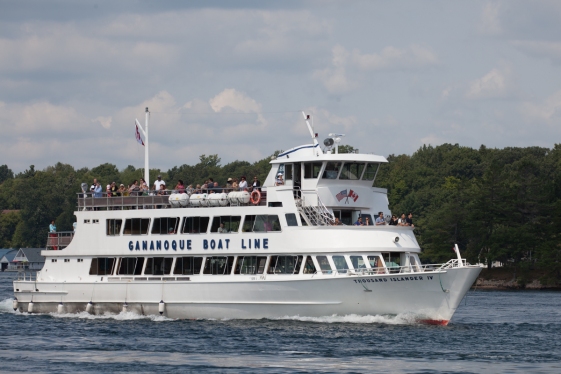 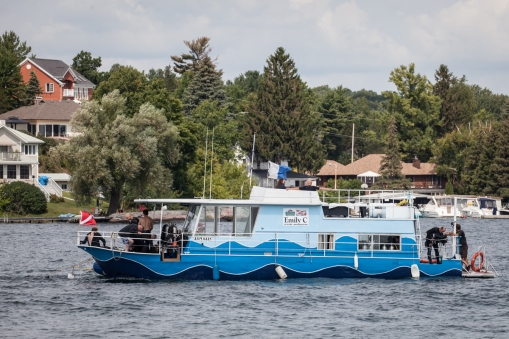 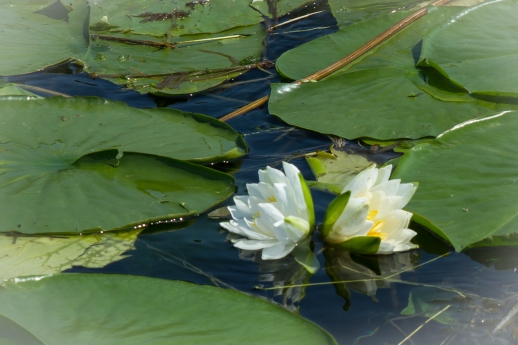 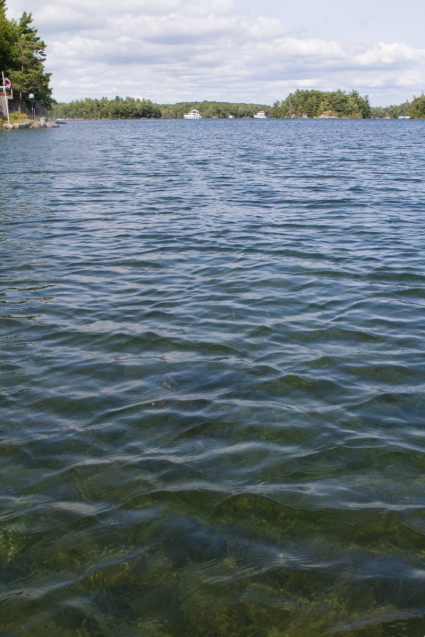 The water is crystal clear

Weeds are really pretty underwater – but not on your anchor when it’s time to pull it up! 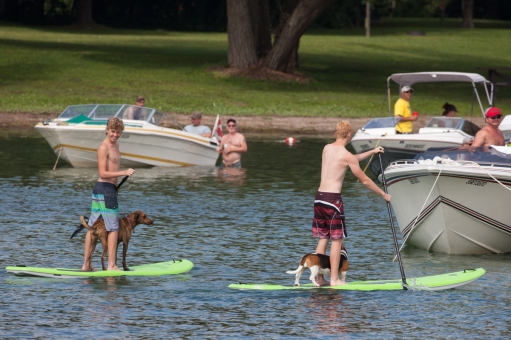 It seems that a lot of dogs like paddle boarding.  I really loved that the basset hound rode with this guy. 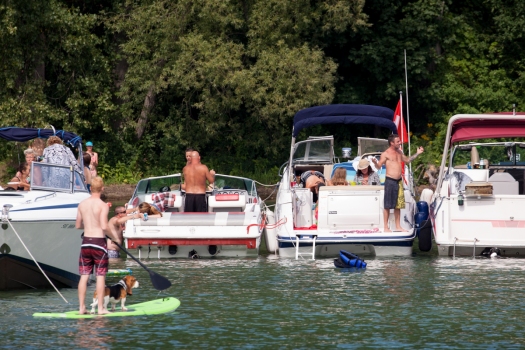 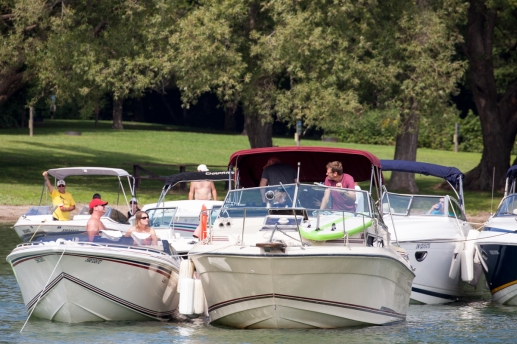 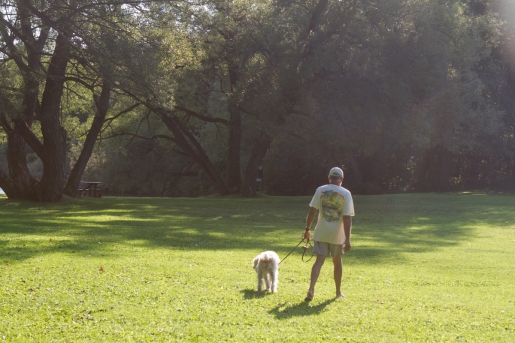 Kirby and John taking a little walk in the sun 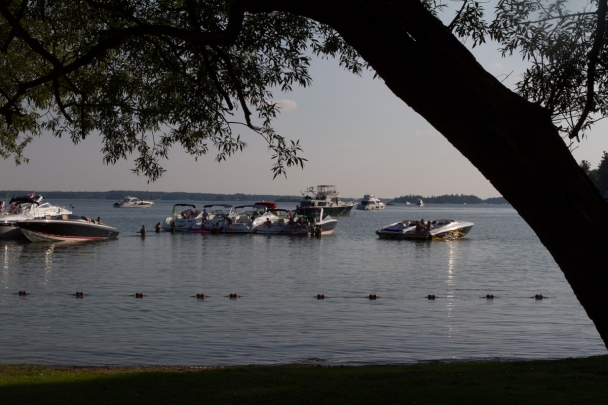 AfterMath in its most active anchorage.

The 1000 Islands area really number over 1800. To qualify as an island the land must be above water year round and contain at least one tree. About 2/3 of the islands are in Canada with the rest being in New York. They are grouped in clusters that have names and each island is also individually named. While touring we anchored in the Admiralty Islands, Lake Fleet Islands, Navy Islands and Grenadier Island and the North Shore. Our trips were short these days, and we enjoyed sleeping in a little, relaxing with coffee in the morning, taking a short ride and having time to explore in the afternoon. We were able to use the dinghy a lot, as nothing is better for exploring than a little boat that can go almost anywhere.

While the scenery was lovely, I found that the waters just didn’t have the same atmosphere as many of the places we had frequented recently, and I think my photos reflect that change. There is more traffic in this area and, while we found nice anchorages, many were just not quite as secluded and tranquil as those we had left farther north. There are a lot of tour boats in this area and the weekend is a busy time for boaters here.

Homes on islands along the way 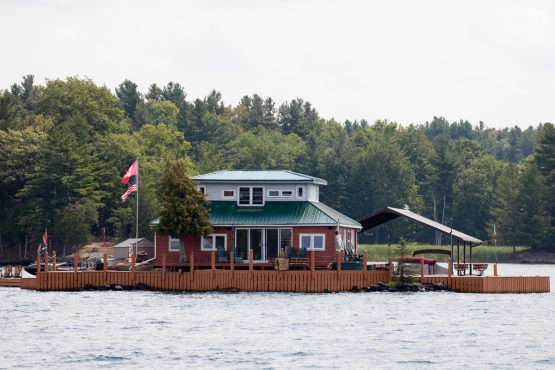 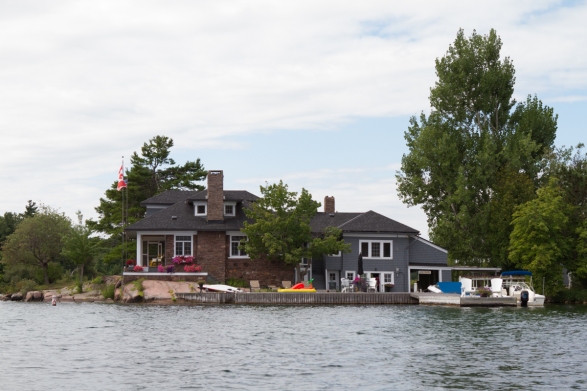 The boat house and the Winnebago

It might be fun to live in a lighthouse

No house at all – just fun and a sailboat

All along the way we enjoyed looking at the variety of homes on the islands. Some are tiny, some are huge, some take up all of the island and others have glorious green lawns. One had a wonderful boathouse, but the home was a Winnebago. We wondered how they got that RV to the island and laughed thinking that the boats may have a more luxurious home than the people. Another had docks for boats, a gazebo and a shelter, but no house at all. Apparently the people live in their sailboat while on their island but use land for meals and other fun. 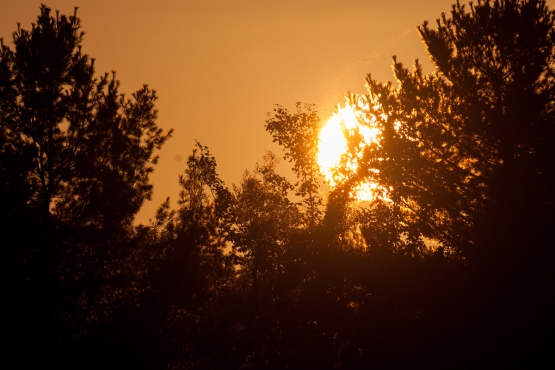 The end had come for our Canadian adventure. August 30 was to be our last day before re-entering the United States. When we started out last spring, I wasn’t even sure that I really had an interest in heading north, but now I am so happy we did. Unforgettable memories were made here, and some of the time was shared with friends and with family.   What could be better?