Monday morning, August 31st, found us on our way out of Canada and back into the United States. Our anchorage from the previous night was only a few miles away from this landmark, which also serves as a port of entry. The castle, with the slight haze on the water, appeared to rise straight out of a fairy tale. I couldn’t wait to see it, but first we needed to clear customs.

Our first view of the fairy tale-like Boldt Castle 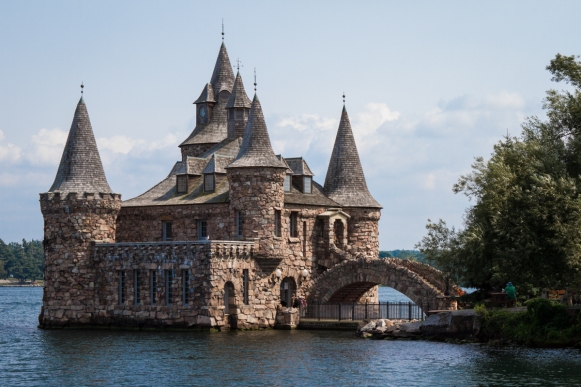 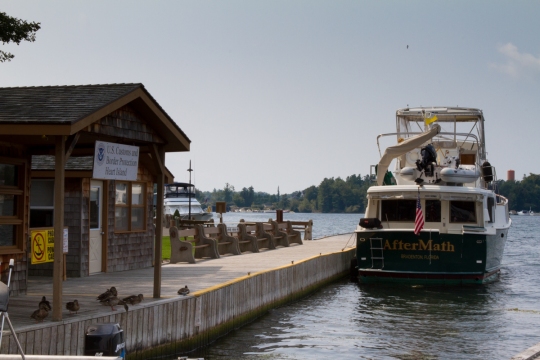 AfterMath at the Customs Dock 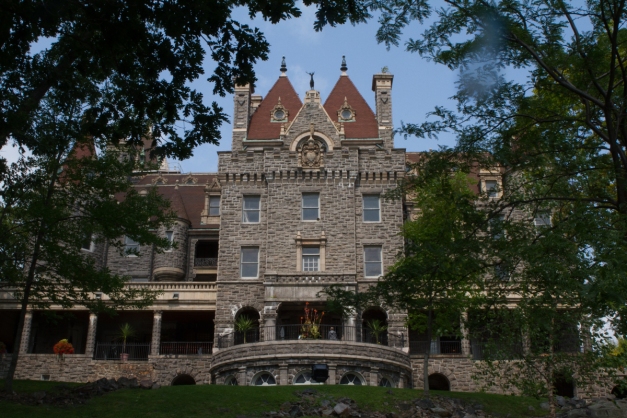 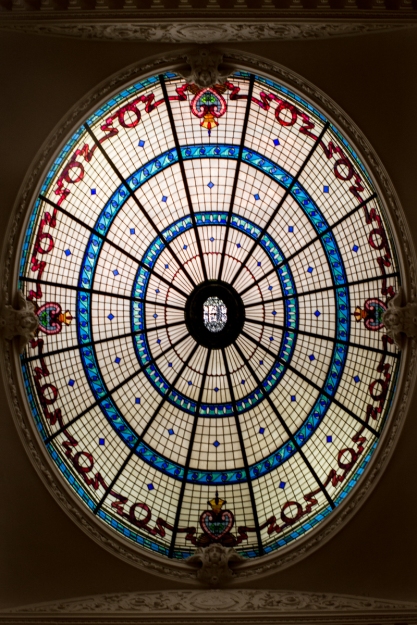 Stained glass ceiling in the castle 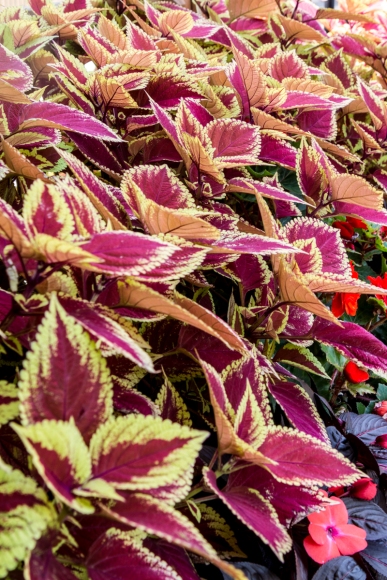 The currently un-refurbished swimming pool in the basement 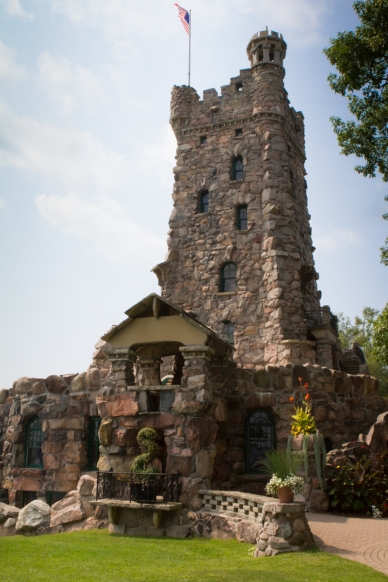 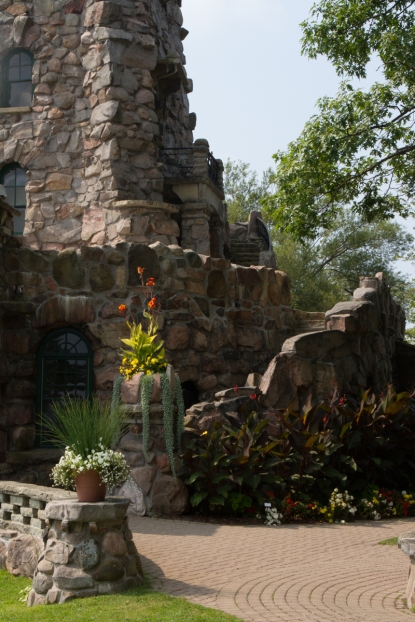 A waterfront view of the playhouse.  I guess my children were deprived! 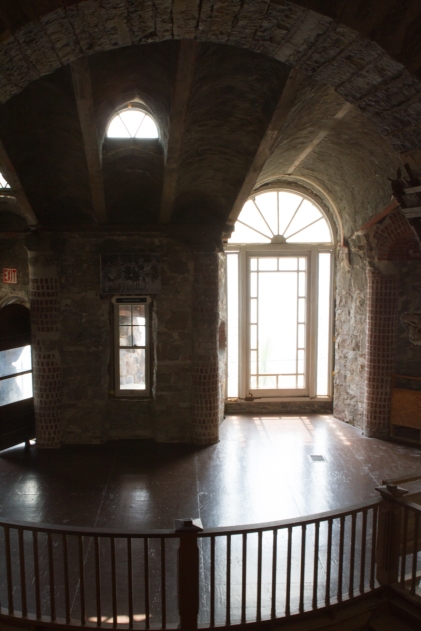 The arch that was to welcome all visitors 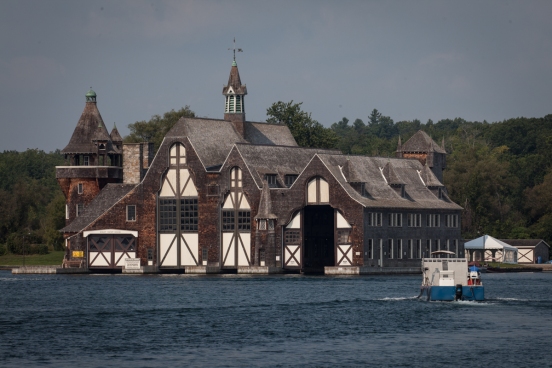 The boathouse.  A water shuttle runs to take tourists back and forth between the castle and the boathouse. 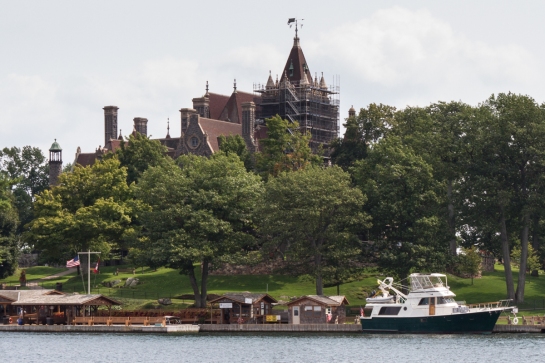 AfterMath from the boathouse

Arriving at the castle, we immediately were directed to a dock where a friendly customs officer came quickly to our boat. He looked at the name, asked for our passports, and said hello to Kirby and Jake, who are always willing to make another acquaintance. In a matter of just a couple of minutes we were told we were free to leave the boat, once again back in the U. S. We asked where we might dock if we wanted to tour the castle before leaving and were told that we were welcome to stay right there on the Customs dock as it was not a busy day. We were so happy with our experience at the island as other ports of entry in the past have not been so easily dealt with.

Boldt Castle was the brainchild of George Boldt, proprietor of the Waldorf Astoria, who wanted to build a castle to show his love for his wife, Louise.   Beginning the project in 1900, he set no price limits and held back nothing. He planned a six-story building with 120 rooms, a powerhouse to power the castle, and a tower to be used as a children’s playhouse. He even paid to have the island, on which the castle stood, blasted into the shape of a heart. Boldt wanted to give the castle to his wife on Valentine’s Day in 1904, but, in January of the same year, Louise passed away. George ordered all work on the castle to be suspended and he never returned to the island again.

Over the next 73 years the castle was left to the elements and to vandals, but in 1977 the structures and land were purchased by the Thousand Island Bridge Authority. Since the 1980’s the organization has been slowly refurbishing the buildings and the gardens and it is now a very popular stop for tour boats from New York and Canada. The first two floors have largely been completed now and they are spectacular. Tourists can see all of the floors of the castle and walk through tunnels and into the powerhouse and the children’s playhouse, even where the refurbishment is not completed. The powerhouse now has a picture history on the ground floor that is fascinating to see. The children’s playhouse has not been restored yet, but will hold a bowling alley on its first floor. Also available for touring is a boathouse across the river from the castle. Inside are gorgeous boats that were part of Mr. Boldt’s large collection.

Crossing under the 1000 Island Bridge, now on the American side.

We spent a few hours touring the castle, the grounds, the playhouse, the powerhouse, and the boathouse. It was a gorgeous day to spend at a beautiful park that is a testament to a man’s undying love for his wife. After our tour was over we headed to a nearby anchorage where we enjoyed a quiet evening, happy to be back in the United States of America.