We are not city people as a rule. John and I love the rural spots, the quiet places, and the out of the way destinations. But, surprisingly, this trip, we loved two major cities in Canada, and we were lucky enough to have our good friends, Chris and Sam, accompany us as we traveled from Ottawa to Kingston. Along the way we stayed in the small towns and rural spaces at the lock walls.

On August 12, we made the switch in our company from Alex, Sasha, and Harris to Chris and Sam Alesevich. Chris and Sam came loaded with meals, supplies, and goodies for provisions along with their luggage, so we all helped unload the car and then packed everything away on AfterMath. After a quick run to a couple of stores, the keys were turned over to Alex, who set out on the drive to Kingston, where he dropped off the Alesevich car and picked up his own. 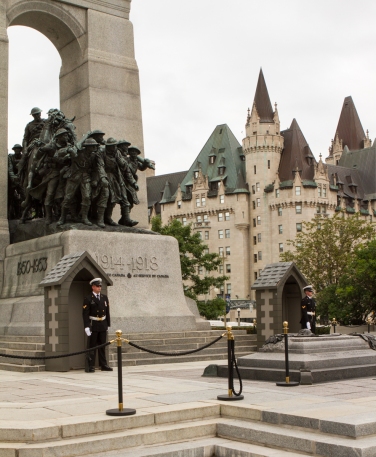 The Tomb of the Unknown Soldier

The change of the guard at the Tomb 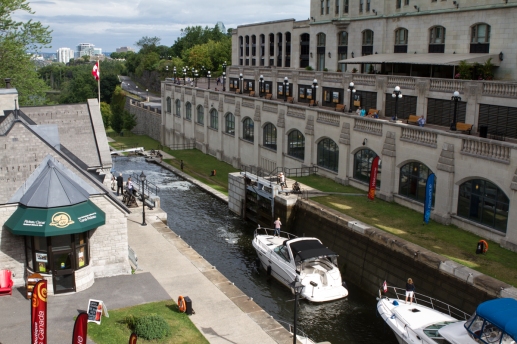 The top of the flight of eight locks in Ottawa.

Along the canal.  Do you see AfterMath?

Twilight on the canal – again, can you find AfterMath? 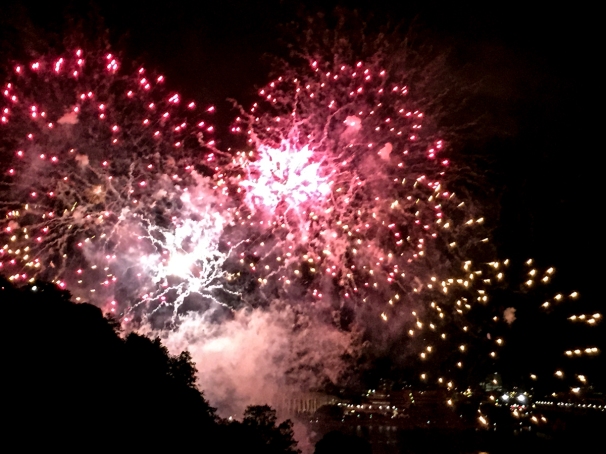 Fireworks on the Ottawa River

A few of the sights from the Northern Lights show.

Chris, Sam, John and I took a nice walk around Ottawa and we watched the changing of the guard at the Tomb of the Unknown Soldier. In the evening, after Chris accompanied me on a short photo shoot and after John grilled a delicious dinner of fresh salmon and vegetables from the nearby market place, we were thrilled to be able to witness Belgium’s entry in the international fireworks competition that takes place throughout the summer in Ottawa. The show was absolutely beautiful and we were lucky to have caught it, as it takes place only on Wednesday nights in the Ottawa River. Afterwards we quickly walked to Parliament Hill where the Northern Lights show runs nightly on the Parliament Building. It is a show that displays the history of Canada and ends with their national anthem. Seeing both shows on the same night was amazing! 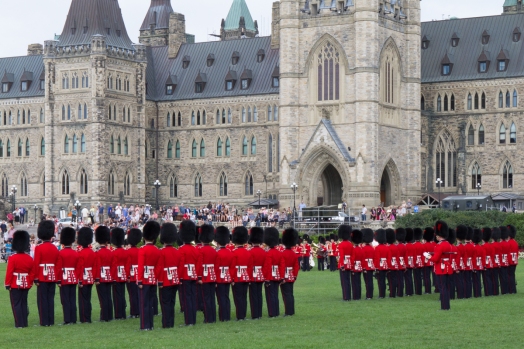 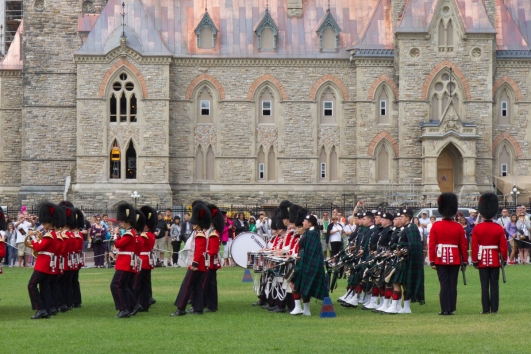 The next day, Thursday, August 13, Chris, Sam and I went back to Parliament Hill to watch the changing of the guard. Canada loves its traditions and pomp and circumstance and we really enjoyed watching the show. We then made a quick trip to the market place to pick up a few fruits and vegetables before we got underway. John had the boat ready when we finished our shopping and we began our southward journey on the Rideau Canal.   We traveled to Burritt’s Rapids where we ate more of that fresh salmon and spent the night at the lock wall.

Kirby and Jake were given extra special treatment by Chris and Sam. 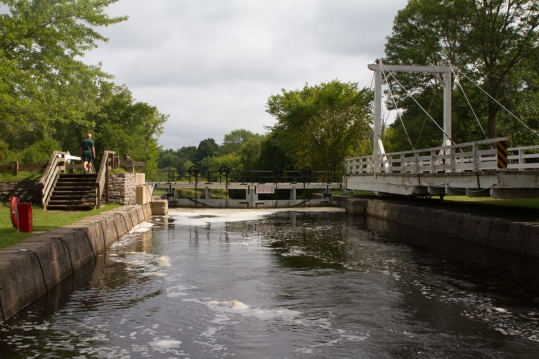 Everyone enjoyed happy hour in the fly bridge one night. 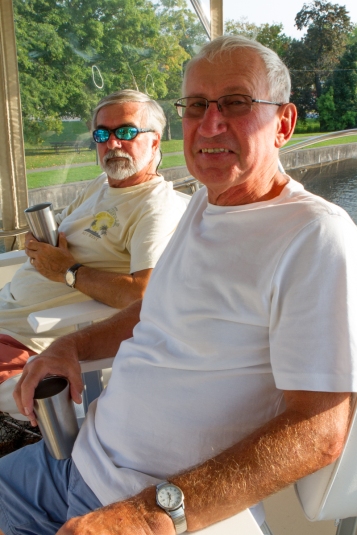 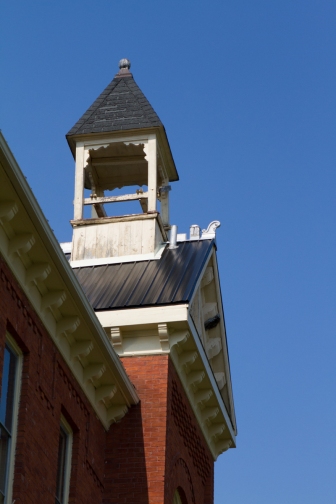 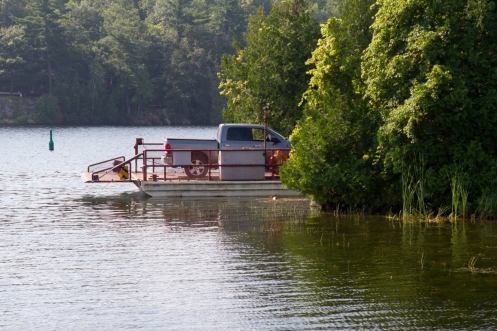 The one car ferry.

Beautiful sights along the way. 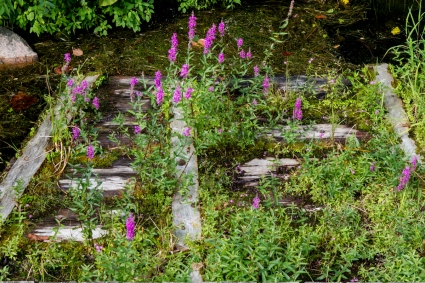 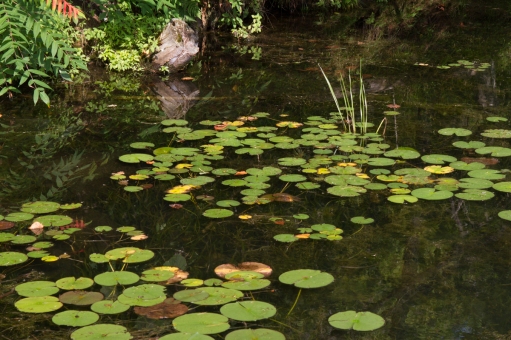 The top of the flight of 4 locks at Jones Falls.

This swing bridge is operated by pushing it to open and close.  Unfortunately, when they pushed it closed it broke the lock crank and they had to push the lock closed by hand too!

The only businesses at this lock were an artist studio and an apple orchard.  We bought apples and got a delicious dessert that day. 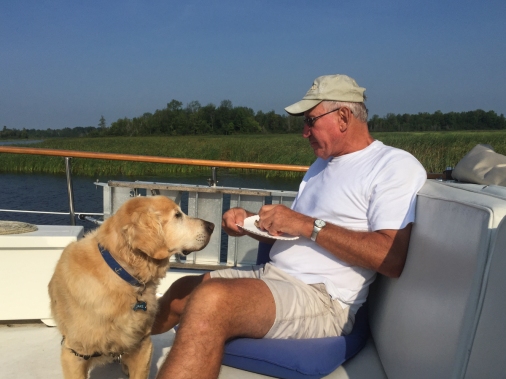 Jake was sure that Sam wanted to share his breakfast!

We retraced our steps along the Rideau Canal, stopping at most of the same stops we made on our way north, but adding the town of Westport to our itinerary on the return trip. Sam became an expert at locking and gave John a nice break from having to do double duty of piloting and working lock lines. Chris could always be found with a camera in her hands, sometimes toting one along when even I didn’t have one, and she was a great help in the galley, making salads, dinners, and doing those never ending dishes. Along the way we had lots of laughs, delicious meals, wonderful happy hours, refreshing swims, walks with the dogs, and unforgettable experiences.

The blue dot shows our position in the rainstorm.

We will always get a laugh out of the night we were at a restaurant in Merrickville and a huge rainstorm broke out. When John looked at a weather map it was obvious that the only place within miles and miles that had rain was right where we were and, of course, we had left the windows and hatch open on AfterMath. Sam kindly ran back in the pouring rain with an umbrella borrowed from the restaurant to close up. By the time we were finished, the sun was again shining and all was well.

Thursday, August 20th, we made our way from our last docking at Lower Brewer’s Lock to Kingston. What a day it was! After leaving the locks, the wind began to pick up and soon it was gusting at 30 miles per hour. While we were comfortable enough on AfterMath, we knew that holding for the bridge at Kingston, which only opens on the hour, was going to be tricky. We made our way as slowly as possible to the bridge to make the 11:00 AM opening, but we still arrived about 20 minutes before opening time. John expertly controlled the boat, but we were all very happy to finally see the bridge open that day. The next trick was getting AfterMath to the dock at the marina in Kingston. Although it was incredibly windy, John made it look easy and we were all happy to be tied up and safe and sound. 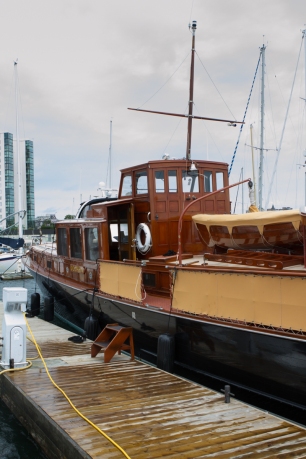 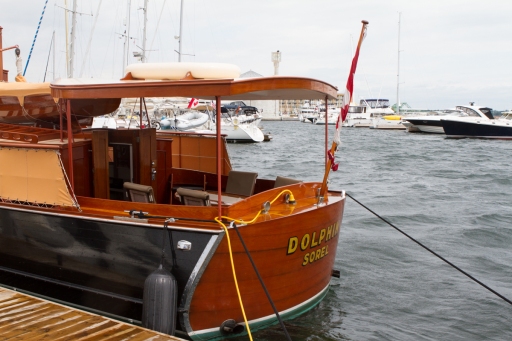 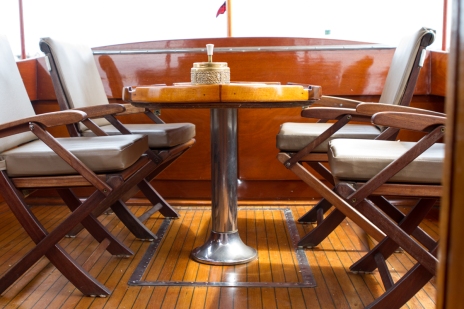 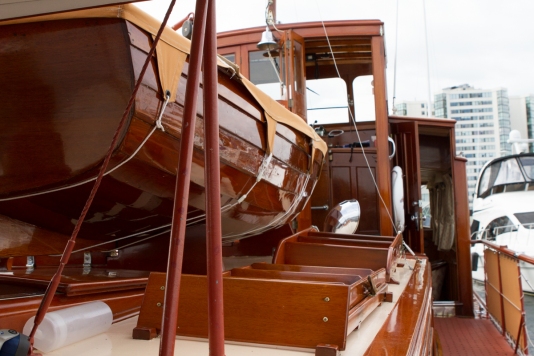 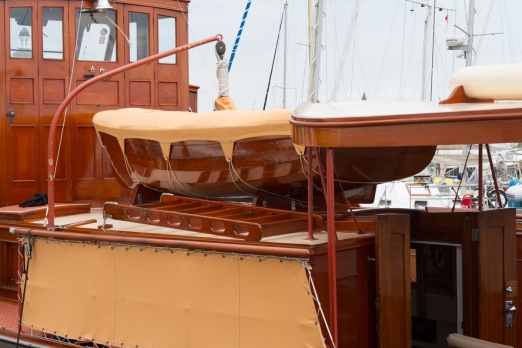 After docking we were able to appreciate the gorgeous boat that was perpendicular to us. It was a 65-foot commuter boat built in 1929 and, after speaking to the captain, we learned the same family has owned it continuously for all of its years. It has never needed a complete refinishing as it has been carefully maintained throughout its time and it truly is spectacular. Daniel Perot (who says his name is like Ross but without the money) is a second-generation captain of the boat and has been in charge of it for the past 10 years. He is a kind gentleman and offered us a tour of Dolphin, which we quickly and gratefully accepted. Daniel, therefore, is my interesting person of this post.

John and Sam walked to the nearby park where Alex had left Chris and Sam’s car and then returned to pick us up. We always take advantage of the use of a car when we can so the four of us headed off to the boat supply store to get deck soap and then to the grocery and liquor stores to replenish supplies. Back on AfterMath, we had a delicious dinner of pasta and pesto, made from Chris’ basil in Connecticut. We finished off the huge bag of chocolate chip cookies she brought and all felt a little sad knowing we would part the next day. It truly was a wonderful visit and we are all so happy we reconnected last spring in Mystic after all those years.

Saying goodbye to our good friends, Chris and Sam. 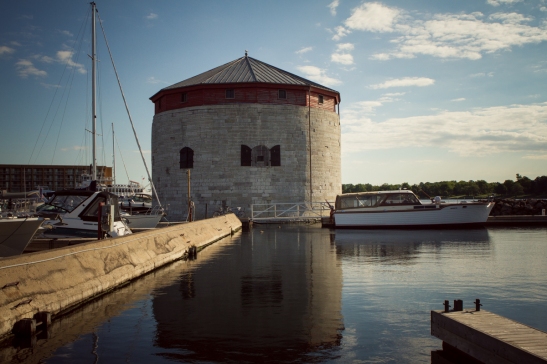 One of the towers built to protect the Rideau Canal from the Americans if they decided to attack.  Thankfully, that never happened.

A locomotive built in 1913 in Kingston. 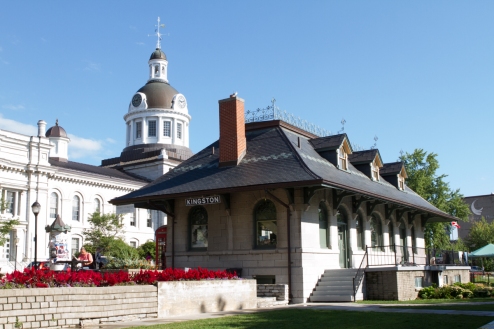 An old hotel that is now really an apartment building.

Kingston City Hall, originally built when Kingston was the capital of Canada 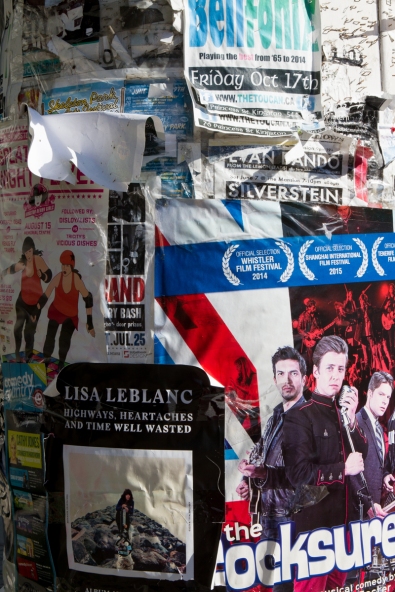 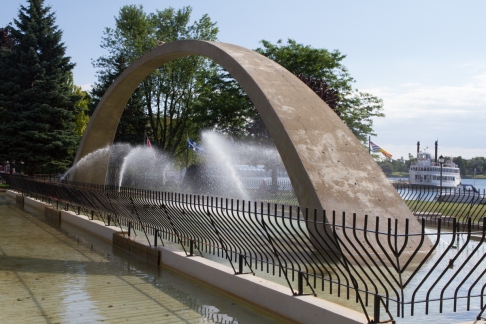 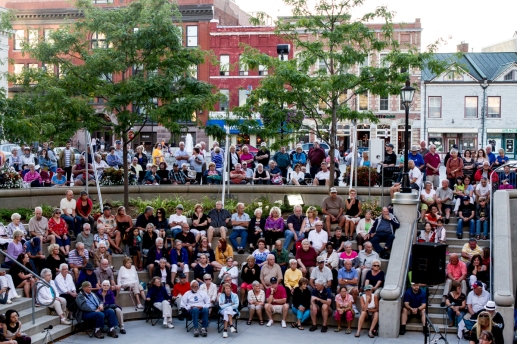 The nighttime view from AfterMath 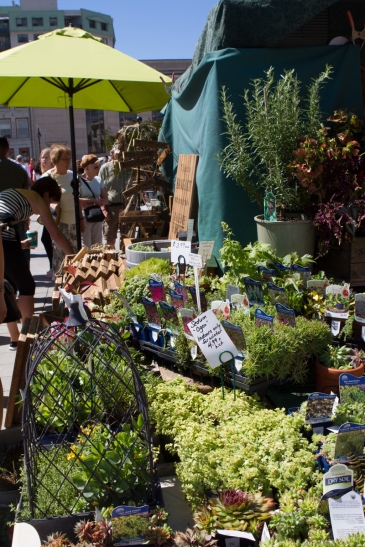 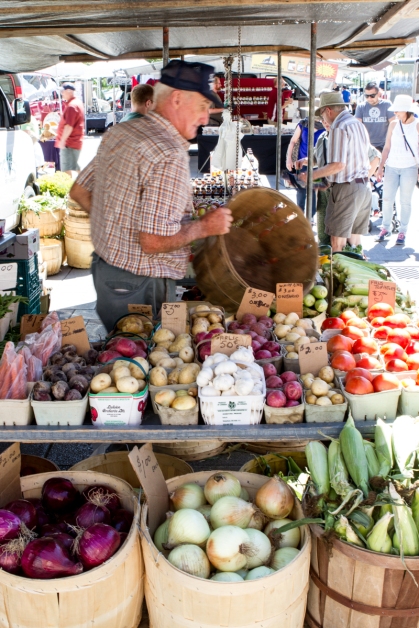 It seems something is always going on in this city.  These performers tell the story of Canada’s first prime minister, Sir John McDonnell

I’m not sure what this guy was doing, but he was great!

And no one seemed sure what these men were doing, but they paraded through town and stopped at City Hall.

Chris and Sam left us Friday, the 21st. John and I spent the afternoon relaxing and doing some trip planning. Friday night we attended a free big band concert in Kingston and yesterday took the sight-seeing trolley around town. We also shopped around the farmers’ market here and went to dinner in a nice little Italian restaurant nearby.

Today is a workday. I will do a little cleaning and laundry and John has tasks to take care of. Tomorrow we leave Kingston after enjoying this city far more than we imagined. Originally we planned to head back to the states after completing the Rideau, but neither of us are quite ready to leave Canada, so we are going to spend an extra week or so here boating through the 1000 Islands. 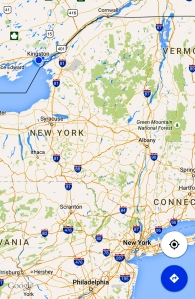 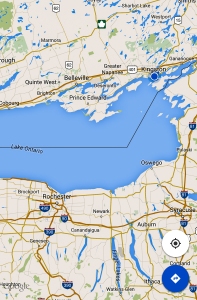 5 thoughts on “Ottawa to Kingston, August 12 – August 23, and a wonderful trip with Chris and Sam”