The Georgian Bay and the North Channel. Those words mean a lot to John and me. This is the area, on the east side of Lake Huron, of which we have read so much. Every single person we have spoken with who has been on these waterways has told us about the beauty here. Also, every single person we have spoken with has told us that the channels can be dangerous as they are rocky and shallow in so many places. The guidebooks all warn that in the length of a boat the depth can change from 100 feet to just a few inches. There are marinas in the area that derive most of their business in fixing bottoms and replacing propellers and shafts on boats damaged on the rocky ledges. There is a small boat channel and a shipping channel farther out in the Georgian Bay that freighters use. Even in the freighter channel, depths can change quickly. Charts MUST be followed and, in many places, it is a good idea to have one person on the bow looking for rocks under the water. Boaters in the small boat channel must make their way slowly. But, all that being said, these two waterways were our goals and we wouldn’t miss them.

Last Wednesday, while John was working with a service tech on getting the oil in changed in Midland, I decided to provision again as we were making preparations to head to some very remote places where no supplies could be found. I went to the marina office to ask how to get to a grocery store and was offered a ride by a man who works in the marina. This worked out great. He took me to the store, waited while I shopped and then drove me back with all of my groceries.

We were able to leave Midland early on Thursday morning. We decided to do a long trip that day, but I hadn’t realized that it would be such open water. The seas were not as settled as I like, so I made the decision that I would wear the seasickness patch the next day. We anchored in Gowar Bay and it was a restful place after about 8 hours of motoring.

On our way to Bustard Island 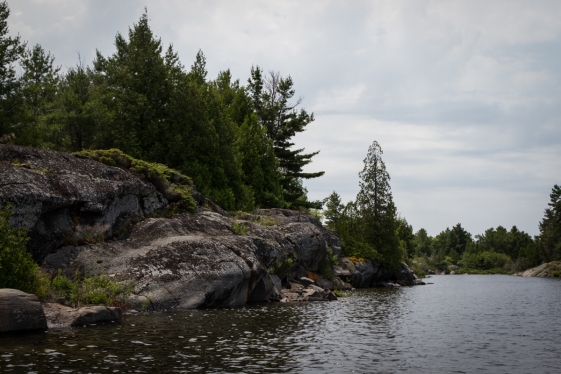 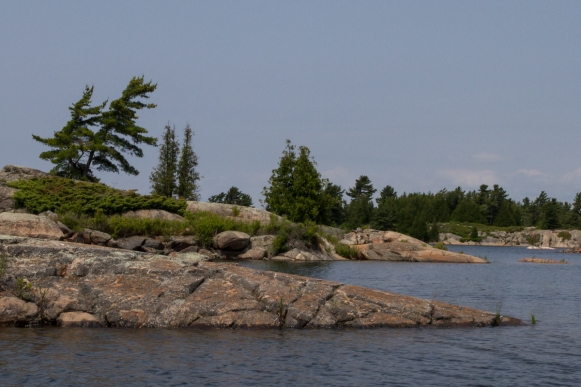 Friday was much more comfortable for me! Those patches really work! We had another long day, but we ended it in one of the most beautiful anchorages I have ever seen. Pictures of the Bustard Islands just can’t do justice to the beauty and the serenity in this anchorage. It was spectacular and we decided to spend an extra night there to enjoy the atmosphere. We were able to take the dinghy out to do some exploring and really had a wonderful and relaxing day on Saturday.

We left our piece of paradise and moved on to Heywood Island Sunday. There we found another lovely anchorage and again did some dinghy exploration. The water was the most beautiful emerald green you could imagine. While we had read that this was a popular anchorage, there were only four other boats there. In fact, our experience through this whole trip so far has been that there are far fewer boats anywhere than we would have expected. 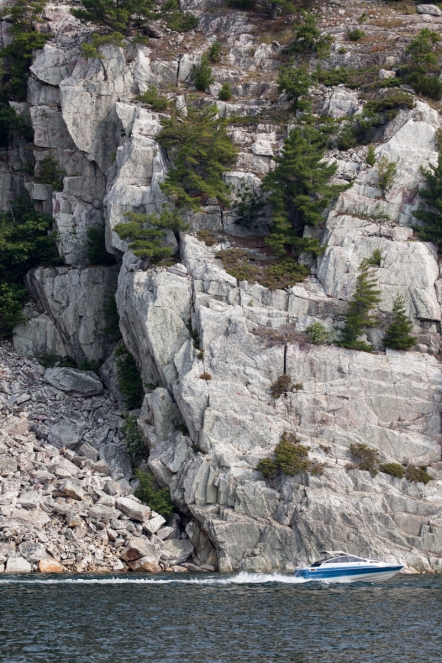 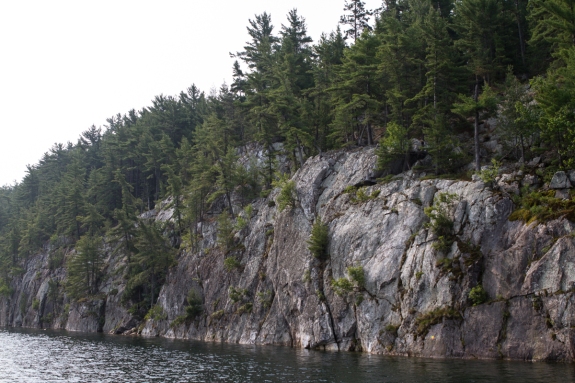 Monday was a day we had been waiting for since we started this trip. We had been told over and over again about how gorgeous the North Channel is and especially how spectacular The Pool is in Baie Fine. This stop was the last of our northbound route for a long time. except for a brief trip up and down the Rideau Canal after re-tracing our path down the Trent-Severn. The anchorage at The Pool was our goal and we couldn’t have been more pleased to arrive there. The scenery exceeded our expectations; there are mountains of white quartz, sparkling clear waters and lots of space in which to anchor. They say that the Georgian Bay and North Channel cruising is only exceeded by the cruising in the Greek Isles, and we have to believe this is true. We sat outside eating lunch, tucked in between hills of granite and quartz where trees grow thick and lush and the water is calm and clear and we congratulated ourselves for accomplishing this huge goal in our lives. 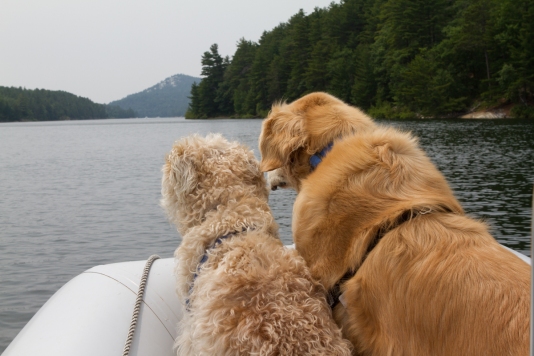 After lunch we decided to take a hike to Topaz Lake, which is high up one of the hills surrounding The Pool. We packed the dogs in the dinghy and took off for a short ride to a dock where the trail began. No sooner did we step off the dinghy than we realized the mosquitos were thick and vicious and we had not brought any bug spray. John said he would return to the boat and get a can while I, who tends to climb much slower than he does, took the dogs up the path. The plan, of course, was that he would meet me along the way or at the lake.

The path was, unfortunately, a tough one. It was not difficult because it was too steep but because it was really a creek that dries up in the summer and is made up of rocks. Lots of rocks!!! The rocks were not smooth creek pebbles, but irregularly shaped large rocks. It was tough walking, but I trekked along, anxious for the climb to be over, but taking my time so that I didn’t trip and break an ankle along the way.

I met a man and his two sons coming down and he assured me I was going the right direction and that I would see a sign pointing my way to the lake after a while. I found the sign and was not too thrilled that it pointed me up a path with more rocks, but I kept going. Jake, our old golden retriever, was beginning to show some signs of distress, and, as he has had heat stroke in the past, I was starting to get a little nervous.

I kept wondering what was taking John so long, but I refused to give up. Finally I came to the top of the hill and saw that the path was going downhill steeply! At that point, I decided that this was going nowhere fast and I could not ask Jake to go downhill knowing that we would eventually have to go back up to get to the boat. We turned around and started heading down the path, through all of those horrible rocks again when I started getting really worried about where John was. I thought something must have happened or he would surely be back. There was no cell phone service at all in this area, so I couldn’t call anyone, but I thought I would have to run into him on my way down hill. All of the sudden, though, Jake lay down on his side, rubbed himself in the dirt, and refused to walk. This was what he did when he had heat stroke 7 years ago, so I was really worried. I couldn’t imagine how we would get this 90-pound dog down the hill and where we could ever get him vet care once we got there. I started yelling for John but got no response. And still those mosquitos were vicious!

I encouraged Jake to get up and we descended really slowly, watching our steps and letting Jake take it as easy as possible. Of course, John had the backpack with the water for the dogs with him! After walking about half way back I heard John calling from behind me. He had been equally worried about me because he had found the lake and I wasn’t there. Somehow I missed the turn that would have brought me to Topaz Lake.

John had asked several people if they had seen me and, while the man with the two boys said yes, no one else had. He was sure I had fallen off a cliff and I was sure he was hurt somewhere. He said he had been yelling for me and tried calling Kirby as well, hoping to hear a bark to lead him towards us (Jake is hard of hearing, so calling him would not have been of any benefit). He climbed up to and down from the lake twice searching for us. 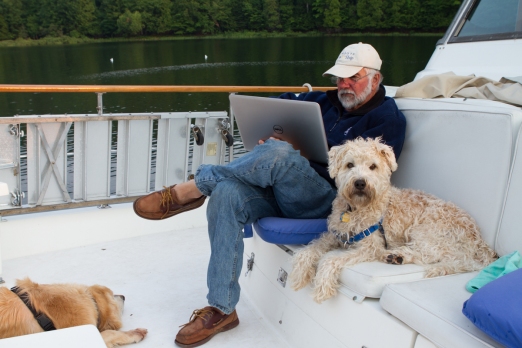 The first thing I wanted, after we asked each other where we had been, was that bug spray! John then took Jake and got him to walk down the hill to the bay. Jake went right in the water and so did Kirby and all ended well. We rode the dinghy for a while longer for the dogs to cool and dry off and then we all headed back to AfterMath for some relaxation time on the bow. It was a scary experience for both of us, but we made it. The really sad part is that John had my camera in the backpack and, although he saw the lake twice looking for me, he never took a picture! I guess I will never see what Topaz Lake looks like, but we were all happy to be safe and sound and back on the boat. 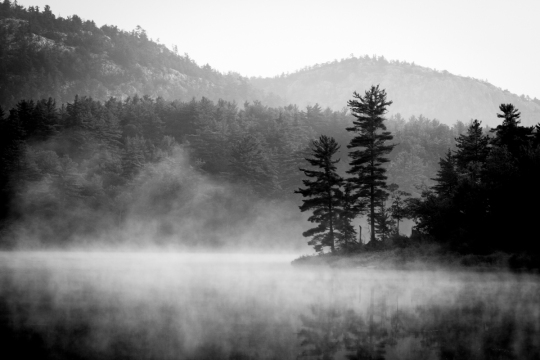 Tuesday, yesterday, started out as a rainy day. Because we were so happy in our anchorage in The Pool, we decided to stay where we were for an extra night before heading to Killarney. This morning, we woke to beautiful weather and a light ground fog that was quickly dissipating. I grabbed the cameras and made sure to capture those few magical moments before we set off for the day.

Weeds on our anchor chain

When it came time to pull up the anchor, though, we agreed that everything comes with its price. While we knew the anchorage was weedy, we never expected the amount of weeds that we found wrapped around the chain before we even got to the anchor itself! By the time the anchor was up and John finished cleaning it off I am sure he felt as though he had done a day’s work.

Every guidebook mentions that there are a lot of bears in this area. Of course, I have been looking every day and today I was thrilled to see what appeared to be a young black bear on the shore of Baie Fine as we motored past. He took his time walking up the rocks and into the forest so I was able to get a good look at him and take several shots. 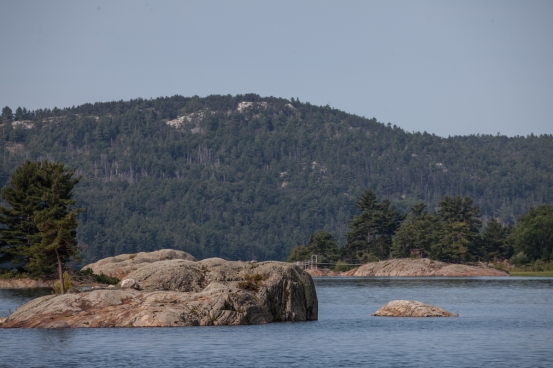 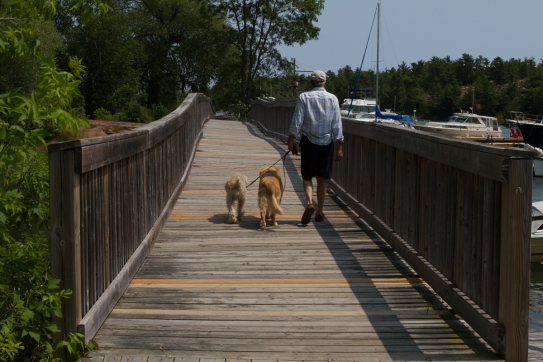 In Killarney – Even the chef helps boaters tie up if he is nearby!

The rest of the ride to Killarney was a beautiful one and we arrived around lunchtime, docked at a marina and set out to have some fish and chips at the town dock. We took a nice walk through the town, which is very small, but really a wonderful stop.

I have met so many interesting people along the way that I decided I am going to start asking them if they mind if I take their pictures and put them on my blog. Today I met Hardy when we were both in a laundromat. Hardy is full-blooded Ottawa Indian. He told me that almost 75% of the people living in Killarney are Indian: Pottawattamie, Ojibwa, or Ottawa. Their main source of income is fishing. Hardy showed me his card that proves he is Indian and told me that if he travels back and forth over the border of the US and Canada, he does not need a passport. The Indian card allows him to travel freely.

These two maps below show our location when we were in The Pool.  Although it is a few miles as the crow flies from Killarney, it is a couple of hours away when navigating.