Boating through the Erie Canal gives me time to think, time to listen, and time to watch. The scenery changes yet as you move along, but in many places it has stayed the same for almost 200 years. In the beginning of our trip, I spent a lot of time checking my phone and computer for news updates and Facebook posts. Now, during the day, I find myself putting the Internet aside. I have much better things to do. I marvel at the lines of stone that remain from an earlier version of the canal. I listen to the birds in the trees and realize that most of the time; I hear only them and our engine, which quietly pushes us along. Today I saw a great blue heron on a bank. It was the first one I’ve seen since we left Florida in March. I also saw a bright orange bird that I believe was a Baltimore oriole fly into a tree. It seemed as though that couldn’t be real, but it was. All along the canal, which is mostly separate from the Mohawk River in this area, there are barges dredging. Little tiny tugboats move them along. The barges have great digging buckets that would give my two oldest grandsons so much joy. “Mighty Machines”, they would say! We are almost done on the Erie, but we will travel down it again in the fall. I am quite sure it will be different and the same, and it will be wonderful once again. 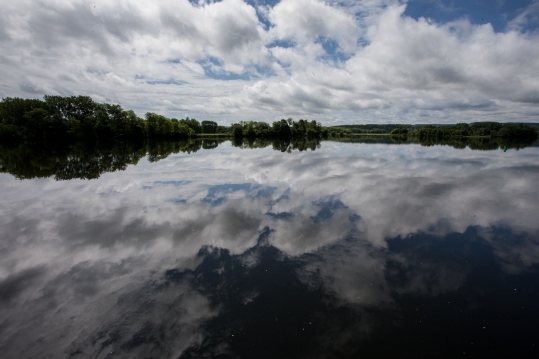 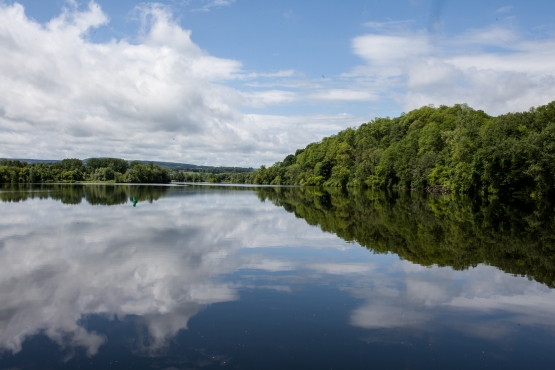 We stayed by Lock 12 all day on Tuesday. The weather predicted severe thunderstorms so we decided to stay put. John was happy to cross some items off of his “to-do” list, and I did a little photography and some reading. The day started out with some beautiful calm water and puffy clouds that provided me with some perfect reflections. I pulled out the wide-angle lens and contentedly shot away.

Notice the train on the right side of the image. 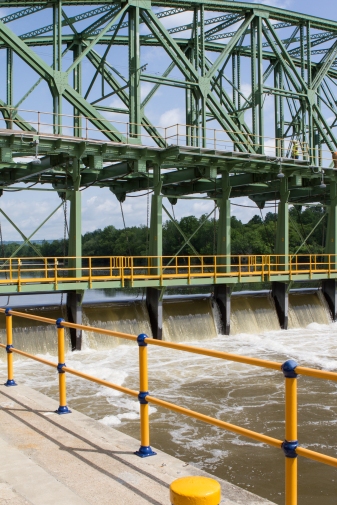 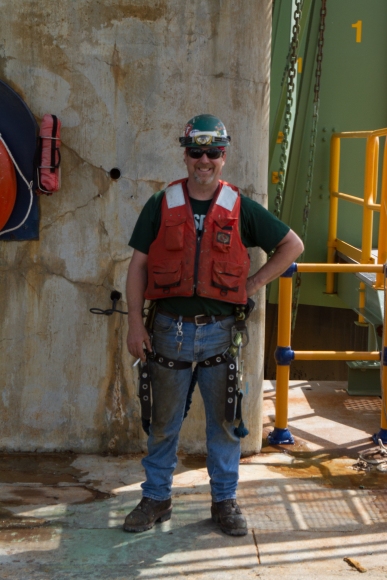 The dockmasters are all so friendly!

Floating logs are NOT a welcome sight! 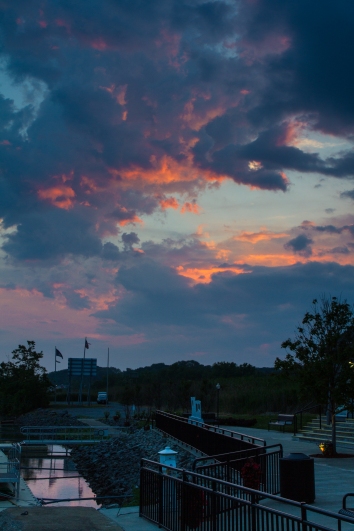 Sunset at Herkimer Yesterday, we decided we would start early and do a good run. We covered six locks over the course of the day. There was quite a bit of debris on the canal near the locks and in some of them, too. The branches you see floating in the picture above are huge – often full trees in size. Much of John’s time at the helm was spent dodging those logs. Lock number 17 was a 45-foot lift, required a port tie, and is the largest of its kind in the world. We stopped after Lock 18, which brought us to a little village called Herkimer. There was a municipal dock there that had a waterfront restaurant, so we decided to have dinner out last night. We really haven’t eaten out since we left Stratford, so it was a nice change. 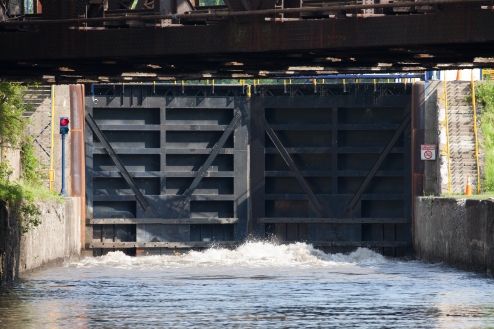 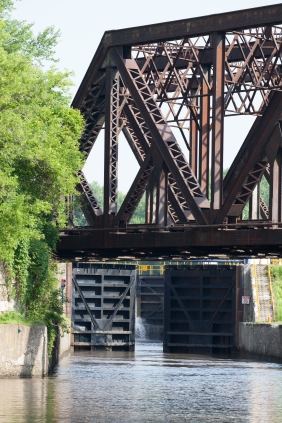 The progression of opening a lock that will raise us to the next level. 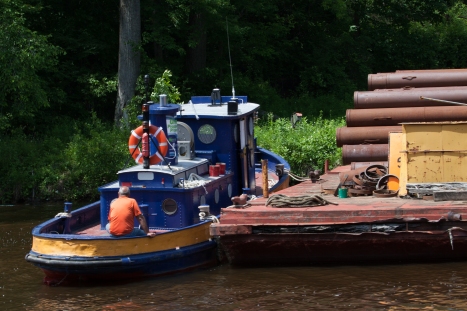 Boats waiting their turn to enter the lock going the opposite direction from us. 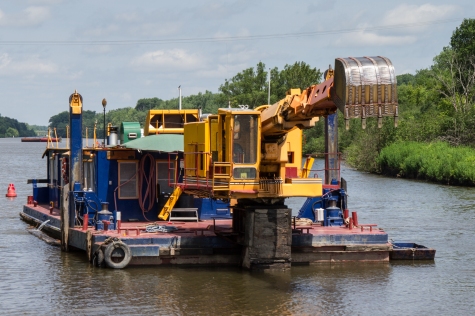 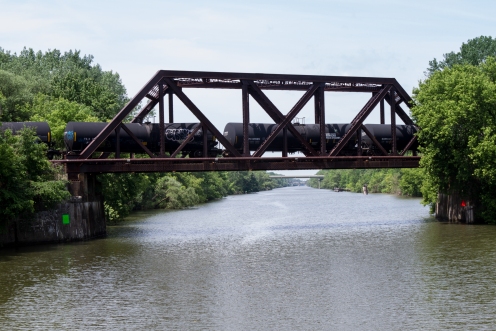 Sights along the way. This morning, we again set out early. I would probably say that today’s scenery was my favorite on the Erie. The canal is lined with trees and flowers and sits up higher than the ground around it. At some points it seemed that the banks were almost non-existent and it surprised me that the water stayed where it belonged. There were a lot of people fishing along the way. At one point we saw a parking lot with a couple of buggies in it. I thought they were for decoration, but soon we saw a rowboat with Amish fishermen in it. Later we saw a canoe as well. Knowing the Amish don’t like to have their faces in photos, I tried to take a picture of the canoe as the man was faced away from me, but he turned just when I snapped the shutter. He waved and did not seem offended, so I guess all is well. We went through Locks 19 and 20 and we were at the highest point of the canal. Since leaving the first lock at Troy, NY, we had gone 108 miles and risen 420 feet. Soon we arrived at Locks 21 and 22, which were the first locks that lowered us rather than raised us. The total drop was 45 feet for the two combined. We both felt that the locks that lower us were easier than those that raised us, so going back along the canal in the fall will really be a breeze.

While traveling along I saw two very young ducks scurrying to get out of our way. I called to John who slowed the boat to a crawl to give them time. We lost sight of one of them but the other little guy just kept going as fast as he could right in front of us. He paddled and flapped his wings so hard and finally managed to get out of the water enough to veer off. It was so sad but so cute at the same time. I had the feeling that this was the duckling’s first flight. We hope the other one made it safely to shore! 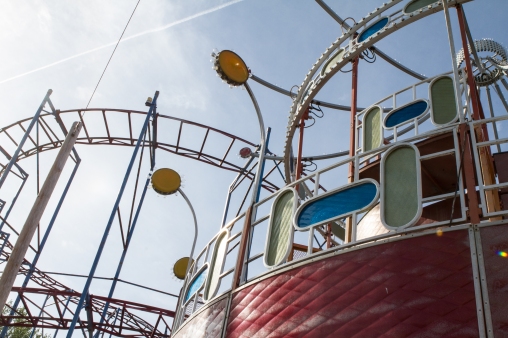 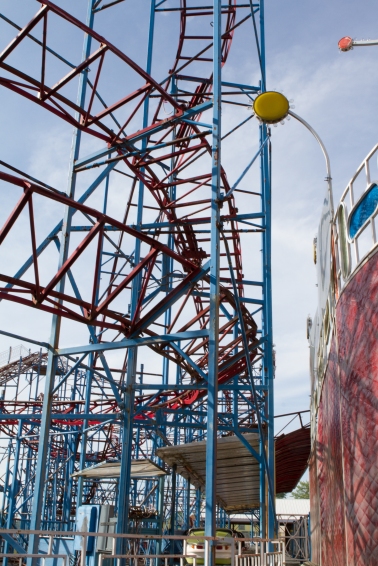 We arrived in Sylvan Beach on Oneida Lake this afternoon. The town has a little amusement park that is not currently open. It seems to me that there isn’t much that is sadder looking than an unused amusement park! There is a classic car show here tonight, though, so we had a nice walk around the waterside park looking at the cars as they set up. Tomorrow we will head across the lake and fill up our tanks. We haven’t done that before and fuel is much less expensive here than it is in Canada. Soon we will be crossing out of the US and into our first international travel on AfterMath! Let the adventure continue!! To keep you updated as to where we are now, here is an overview and a close up. 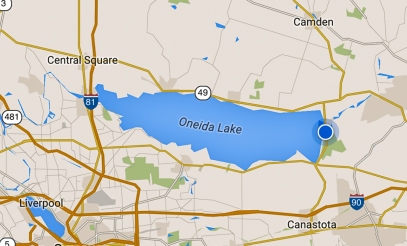 7 thoughts on “Lock 12 to Sylvan Beach on Oneida Lake”