Today is Memorial Day, the day we pause to remember all of those who have served and are currently serving in the military. For our family, the list is long. Starting with our parents’ generation we are thankful for the service of John Daigle, Sr., George Hattersley, Elwood Hattersley, Kathy and Steve Coffey, Jack Hattersley, Dick Tomkins, Caroline Zedella, Matt Coffey, Jason Daigle, and Jeff Daigle. We also thank friends and children of friends who have dedicated themselves to keeping America free and strong. This group has served in the Army, Navy, Air Force, Marines, and Coast Guard. The dedication of all of our service people and the sacrifices made by their families is appreciated more than they can ever imagine.

Life on AfterMath has been busy as usual. First of all, there is the key situation. Some of you may have seen the post on Facebook where we put out a plea for a key that might match the only “house” key we had for our boat. It is a very old fashioned skeleton key and we were a little nervous that it didn’t have a twin anywhere. I went to locksmiths who said they couldn’t make a copy. One dear friend, Gail Pecora, who saw my request, sent me two treasured keys from her old house. We were touched that she was willing to part with them for our cause and we were all hoping they would work just because it would have been so much fun to have keys from a house in Fairfield, CT be a part of this adventure. They weren’t a fit, however, so I mailed them back and decided to visit a blacksmith shop near the marina. It turned out that he was really more of an artist who recreates old iron fences and I don’t think making two key copies was one of his interests. However, a younger man named Matt, in the next shop, who is also an artist, overheard the conversation and said that he liked making keys. Well, Matt is a wonderful and persistent guy! He designed a couple of keys that roughly resembled ours. After many trips back and forth by John, we finally had two keys that worked! And Matt asked for $35. We were thrilled to say the least! 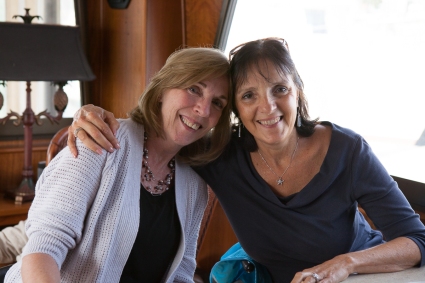 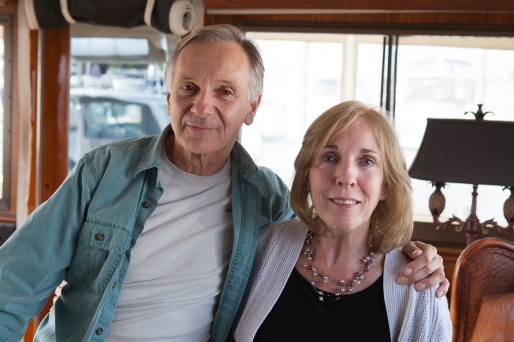 Wednesday night brought us visitors again! The Daigle family is learning to love Florida. Jim and Julie own a second home in Cape Coral while Rich and Kathy recently bought a second home on Amelia Island. Everyone has just returned to the north for the summer so we were able to have a get together here so they could tour AfterMath. There were stories told and secrets shared and it was a great night with them all here. 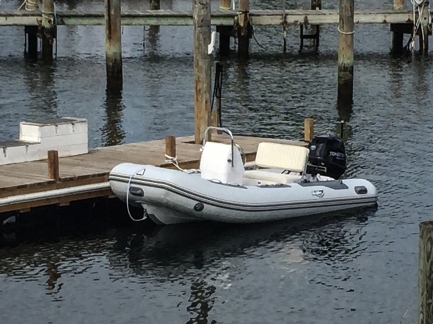 The big news this week is that the dinghy finally arrived on Thursday. This was the last piece of the puzzle that was keeping us from leaving Mystic. This weekend has been a flurry of activity as we had tie downs for the little boat to be tied on top of AfterMath, and with the final outfitting we need to be underway. John has tightened 256 hose clamps in the engine room, checked the water levels in 12 batteries, pulled the fuel gages out to measure the fuel in the tanks, replaced hardware on the anchor rode, made numerous runs to West Marine, and performed countless other last minute tasks. As for me, I’ve stocked the freezer, refrigerator and cabinets to their capacity. I also had my car cleaned and detailed and went to the Honda dealer to find out what we would do about getting rid of the car. I will tell you, if you ever want to lease a car, I suggest Honda highly. We were willing to sell the car to any family member who wanted it if they just wanted to meet what we owed on the lease. When no one replied, I took it to Honda who will take the car back and send me a check for its additional value. You have to love a deal like that!

As we prepare to leave, I thought I should show you the view most people get as they pass by on the dock. Kirby has become the good will ambassador, greeting everyone he sees. Often when sitting inside the boat I hear a chuckle and a quick comment about that “cute dog” that loves to say hello. Jake, on the other hand, is happy to relax a bit – make that a lot!

So, with the final preparations just about done, tomorrow morning I will head to Honda, drop off my car (and hope they give me a ride back to the marina!). Then we will untie and shove off as long as the weather is good. We expect to anchor at Duck Island in Westbrook, CT tomorrow and then head to Stratford for two nights. In Stratford we will have a boat de-naming and then christening party. Chris Alesevich has offered to drive me around to buy the food and champagne and I know that will be a fun day of preparation for a fun night. It looks like this adventure is about to begin for real!!